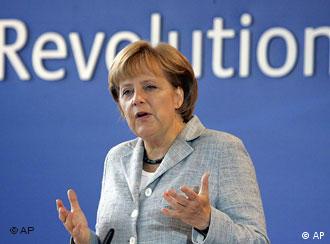 In a key note speech on Friday Merkel warned there was no sense in looking back misty-eyed when remembering the legacy of the "unjust" German Democratic Republic (GDR).

She also challenged the opposition Left party, made up of reformed communists to clearly define their relationship to the GDR past.

The speech by Merkel, who grew up in the communist state, was part of this year's anniversary commemorations marking the opening of the Cold War barrier on November 9, 1989 in a peaceful revolution.

It also coincded with the 20th anniversary of the East German local elections of May 7, 1989. Merkel said the civil rights activists who protested against those rigged elections ushered in the end of the dictatorship.

"May 7 was the beginning of the end of the GDR," Merkel said earlier this week. "In this year of the peaceful revolution we should think of those who showed courage, by revealing the local elections to be a sham, or by escaping the GDR in protest."

The beginning of the end

Merkel described May 7 1989 as the day the "system had its mask torn from its face." 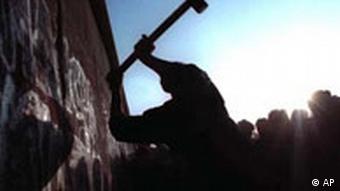 The Berlin Wall came down for good in 1989

Speaking at a forum discussion in Berlin, Merkel paid tribute to the role of the church in the former GDR. They gave a voice to calls for "Freedom and Change", said Merkel. The German Chancellor spoke of the special strength of the peaceful revolution and the luck that made dreams become reality.

Despite positive memories of the GDR for some Germans, Merkel said that its was an "unjust state" where surveillance and spying were party of everyday life, where there was no place for an independent justice or free press.

Merkel said the Hohenschoenhausen jail, named for the northeastern district where it is located, was a symbol of a "sad chapter in the history" of the communist state.

"This drives home the brutality with which people's dignity was abused," she said, after meeting with former prisoners of the facility.

"It is crucial that this chapter of the history of the East German dictatorship is not covered up or forgotten."

She also met with a group of pupils and underlined the importance of instruction in schools about East German history as today's graduates would have no personal memory of the country's four-decade-long division.

Germany Tuesday marks the 55th anniversary of the June 17, 1953 uprising in East Germany when thousands of workers took to the streets against the Communist government, an event that set the stage for the 1989 protests. (17.06.2008)

Politicians have called for a new effort to educate young people about the true nature of East Germany after recently surfaced shoot-to-kill orders have rekindled a debate about conditions in the communist country. (16.08.2007)