Berlin Kicks Off 20th Anniversary Year of the Fall of the Wall | Germany| News and in-depth reporting from Berlin and beyond | DW | 28.01.2009

Berlin kicked off a year of events on Wednesday, Jan. 28, commemorating the 20th anniversary of the fall of the Berlin Wall on November 9, 1989. 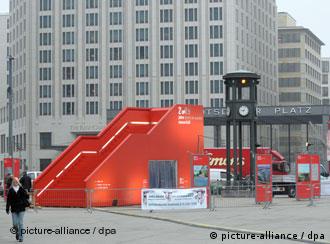 At a gathering at Berlin's landmark Potsdamer Platz, the city's Senate representative Richard Meng said 2009 is a "year of remembrance," as well as a "year of respect for the people who contributed to the peaceful fall of the Wall."

Throughout the year, exhibitions, talks and guided walks will remind people of the huge changes Berlin has undergone.

The highlight of the year will be a weekend of celebrations and a huge series of domino stones, set to topple on November 9, symbolically marking the sequence of events that brought an end to communism.

"In Berlin, Germany grew together more than anywhere else," Meng said, adding that it's time to "show and describe the change which has occurred everywhere in Berlin."

From Thursday, a red information booth at Potsdamer Platz highlights the city's transformation since 1989.

The booth has a flight of stairs, granting a panoramic view of the square which was redeveloped in glass and steel with the aim of helping it regain the central role it played before the city was divided. 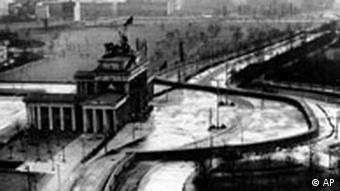 An interactive display, replicated in a mobile box travelling the city, reveals pictures of Berlin's changing face over the course of the last 20 years.

As the infobox visits 15 historically significant locations across Berlin, a large helium-filled arrow will float above it, pointing to the sites from a height of 100 meters.

These booths are needed, city officials said, in part because very little is left of the original Berlin Wall. Tourists and locals alike are baffled by the fact that it's now difficult to see the former division between east and west.

Berlin's mayor, Klaus Wowereit, said there was an urge to remove all traces of the city's division after 1989. "We were in a euphoric mood," he told Berlin's RBB Inforadio on Wednesday.

"Nobody wanted to bear this wall any longer, this wall of disgrace that divided the city, that brought so much distress to the city, to the families, to the individuals affected."

Despite the posters, maps and interactive displays, it's difficult to transmit "the horror of the Wall, this system of terror with its mines, its dogs and the orders to shoot," the mayor said.

Wowereit added that, in retrospect, maybe the Wall was removed too hastily. "Maybe more should have been left standing as an example," he said.

In November 1989 the Berlin Wall came down, allowing for the reunification of East and West Berlin, and ultimately East and West Germany. Two decades later Berlin is planning a monument to commemorate the event. (26.12.2008)

2009 a Year of Anniversaries in Europe

Europe is gearing up to mark a series of major anniversaries in 2009, highlighting defining moments both in terms of European and world history. (28.12.2008)