After a first half wobble, Bayern Munich powered past Arsenal to all but secure their passage to the Champions League quarterfinals. Arjen Robben, Robert Lewandowski, Thiago (2) and Thomas Müller scored in a 5-1 win. 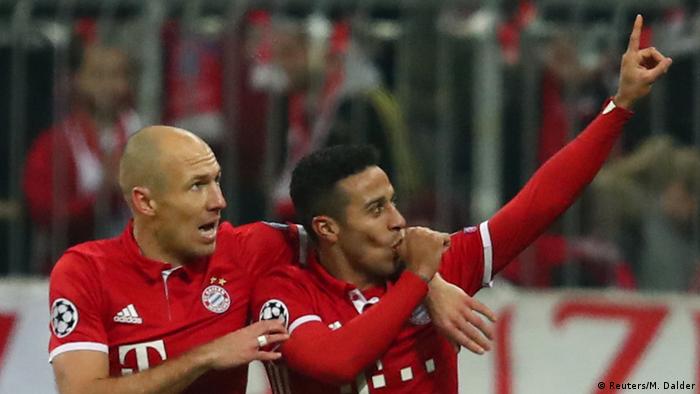 Bayern Munich made light of their perceived domestic struggles with a devastating 10-minute spell that saw them all but secure their passage to the Champions League last eight for the sixth year in a row and extend their run of home wins in the competition to 16.

Robert Lewandowski and Thiago helped the Bundesliga champions pull away from Arsenal after Alexis Sanchez pegged them back to 1-1 following Arjen Robben's opener. Substitute Thomas Müller wrapped up the win late in the game.

The Bavarians dominated the ball from the off and the opener was as predictable as the fashion in which it was scored.

When Arjen Robben received the ball on Arsenal's left, the surrounding defenders must've known what was coming next. But they couldn't stop it. As he has done countless times over his long career, Robben stepped inside a couple of feeble attempts at challenges before unleashing a bending, dipping strike with his left foot. This one was a particularly vintage effort, kissing the underside of the bar on the way in.

Bayern looked in the mood, Robben going close again as the hosts tried to press home their superiority. But they were almost pegged back just before the half-hour mark, Manuel Neuer spilt a free kick from his Germany teammate Mesut Özil but was relieved to see the linesman's flag raised for offside before anyone could make anything from the rebound. 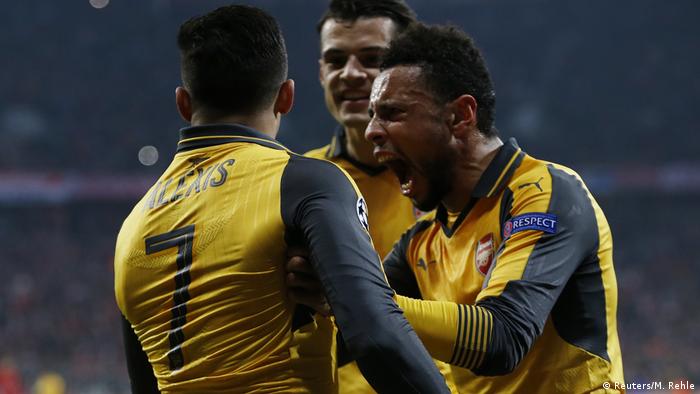 Alexis Sanchez converted the rebound from his own penalty

Bayern didn't heed that warning. Just two minutes later, Lewandowski swung a leg at a bouncing ball in the box but found only the ankle of Laurent Koscielny. Neuer pushed away Alexis Sanchez' poor penalty but the rebound fell to the Chilean. Sanchez hit fresh air with his first attempt but then found the composure to drive low past Neuer and level things up.

Bayern had a penalty claim of their own soon after, David Alaba's cross striking Hector Bellerin on the arm as the game became increasingly frantic. But Arsenal's Spanish full back was close to Alaba and the referee deemed that he was defending in a natural position.

Arsenal only had about 20 percent of the ball in the first half but they created as much as their opponents. Granit Xhaka, once of Borussia Mönchengladbach, stung Neuer's palms with a firm drive just before the break before Lewandowski and Mats Hummels both went close with headers. But the best opportunity of the lot fell to Özil, who could only strike straight at the keeper when through on goal from the left.

With Koscielny limping off just after the break, Lewandowski was keen to make amends for his earlier error. He didn't have to wait long. Philipp Lahm hung up a cross from the right and the Polish striker rose above German international Shkodran Mustafi to power a header back across goal and in to the far corner. Soon after, Arsenal's impressive end to the first half was forgotten entirely as Bayern extended their lead through Thiago. The Spaniard was played in by a beautifully-judged Lewandowski flick and stroked low in to the left-hand corner.

Bayern were now rampant. Lewandowksi hit the bar and Robben had claims for a penalty denied before Thiago made it four. His second was less aesthetically pleasing, a deflected strike from the edge of the box outfoxing Ospina, but Bayern didn't care – the Bundesliga champions sensed they could end the tie in the first leg.

And they did just that, Müller taking advantage of some wretched Arsenal defending to fire home the fifth and surely end Arsenal's European season in just 90 minutes.

A pair of glaring misses from Pierre-Emerick Aubameyang summed up a night of wasted chances for Borussia Dortmund, as they fell to a 1-0 defeat against Benfica in the first leg of their Champions League last 16 tie. (14.02.2017)