A pair of glaring misses from Pierre-Emerick Aubameyang summed up a night of wasted chances for Borussia Dortmund, as they fell to a 1-0 defeat against Benfica in the first leg of their Champions League last 16 tie. 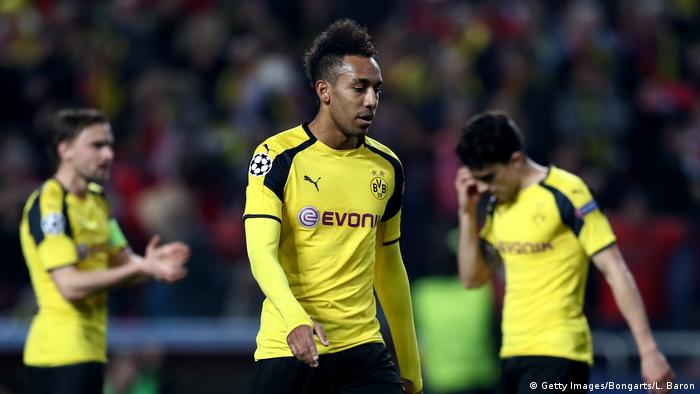 For a team who spent the group stages of the Champions League slashing goalscoring records, Borussia Dortmund did more than a passing impression of a team without a cutting edge on Tuesday night, as they slumped to a first European defeat of the season. Pierre-Emerick Aubameyang was the biggest culprit, missing a gilt-edged early chance and a second half penalty which allowed Konstantinos Mitroglou to steal a scarcely-deserved win for Benfica.

Dortmund started with a purpose borne of a difficult time in the Bundesliga of late. The visitors continually pressed their opponents high up the pitch in a frenetic opening spell and should have got their reward just 10 minutes in. Ousmane Dembele won possession in midfield before sweeping a precise left footed ball in to the path of Aubameyang. Dortmund's top scorer had plenty of time and space in the box but snatched at the chance and fired over.

Dembele had the next chance 12 minutes later as Dortmund turned the screw on the Portuguese side. The ball fell to the French teenager in the box after Benfica failed to clear but his shot was bundled behind by a combination of Victor Lindelof and keeper Ederson. 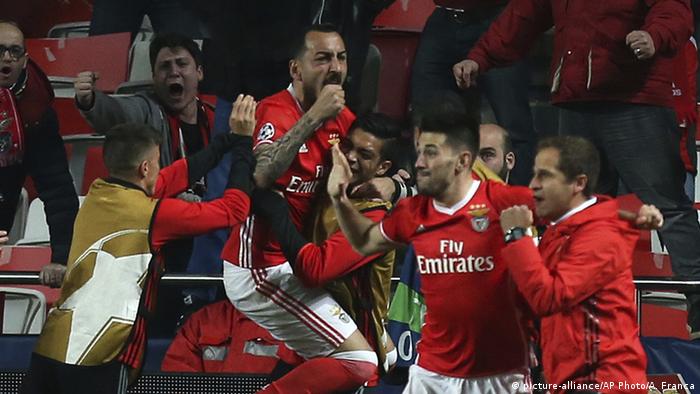 The hosts looked ragged, particularly in midfield where they seemed to have no answer to Dortmund's relentless harrying. The pressure nearly paid off again just before the break when Raphael Guerreiro robbed Ljubomir Fejsa on the right hand side of Benfica's box. The Portuguese midfielder drilled low across the box but Aubameyang wasn't able to get a toe to the ball.

Ederson got more than a toe to Dembele moments later. The Benfica keeper came charging out of his box and swung his left leg in an attempt to clear. But the rapid French forward got there first, nicking the ball away from his opponent before being cleaned out. The offence was probably marginally outside the box but Dortmund got nothing and the sides went to the interval goalless.

Dortmund's first half domination was near total but they were made to pay for their profligacy almost immediately after the break. Benfica's veteran captain Luisao rose highest to meet a corner and Mitroglou stabbed home from point blank range at the second attempt.

It was a shambolic goal for Dortmund to concede. The Greek striker, who played his youth football in Germany, had acres of space in the middle of the six yard box with Guerreiro stuck on the post playing him onside. 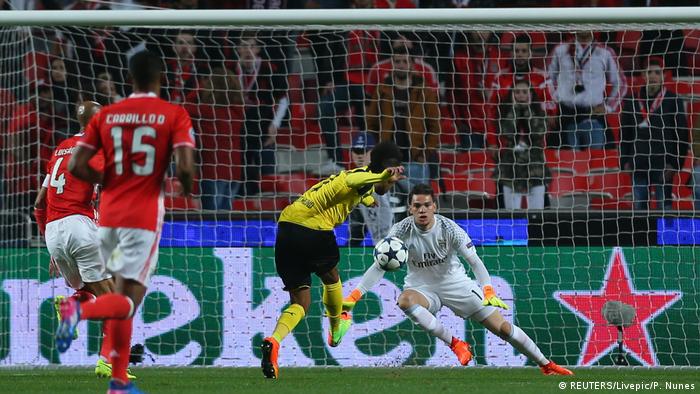 Aubameyang's early miss set the tone for the night for Dortmund

Again Dortmund poured forward, again they created chances and again they spurned them. First Aubameyang, then Reus, then Piszczek. But their waves of attacks looked to have finally paid off just before the hour mark when Feysa handled in the area giving Aubameyang the chance to score from the spot. But again Dortmund were denied. Aubameyang's penalty was weak and straight at Ederson who barely had to move to make the most regulation of penalty saves.

The striker could have had a hat trick but instead saw his number come up on the third official's board as Andre Schürrle entered the fray.  The German side continued to press, with Ederson making a stunning save from substitute Christian Pulisic's deflected strike, but couldn't find the away goal that would've given them an advantage in the tie.

Thomas Tuchel will still feel his men have a strong chance of progression, with Benfica showing little to suggest they pose a legitimate attacking threat. But when the Portuguese champions arrive in Dortmund on March 8, there won't be second chances.