Juventus will face Barcelona in the Champions League final after a 3-2 aggregate win over Real Madrid. Alvaro Morata cancelled out Cristiano Ronaldo's penalty to seal their place in Berlin. 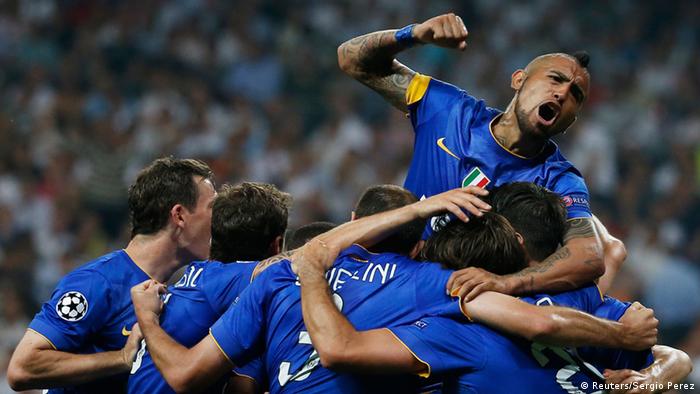 Juventus held Real Madrid to a 1-1 draw at the Santiago Bernabeu Stadium in their Champions League semifinal second leg. After a 2-1 home win for Juventus in the first leg, they were favorites to qualify despite the prospect of facing Madrid in the Spanish capital.

Cristiano Ronaldo opened the scoring with a penalty in the first half, Alvaro Morata scored once again against his former club to send Juventus through 3-2 on aggregate.

Real Madrid knew their away goal would be vital heading to the Spanish capital. But with the score at 2-1 from the first leg, scoring first would also be important to bring the away goal into play - and they did.

Minutes after Gareth Bale had sent a rocket shot at Gianluigi Buffon, Madrid had a penalty. James Rodriguez drifted into the box and past Giorgio Chiellini, with a clip from the Italian sending him down. Cristiano Ronaldo blasted down the middle to bring the aggregate score level.

Ronaldo's 77th goal in the Champions League, bringing him level with Lionel Messi on top of the all-time list once again. It also tied the Portuguese forward with Madrid legend Alfredo Di Stefano on 307 club goals.

Juventus, in search of a first club treble, were looking to counterattack against the forward thinking defending Champions League winners. But it was Buffon who was called into action again after half an hour, saving well from a Karim Benzema header. Iker Casillas had just a single save to make in the first half, after Arturo Vidal's shot early on. 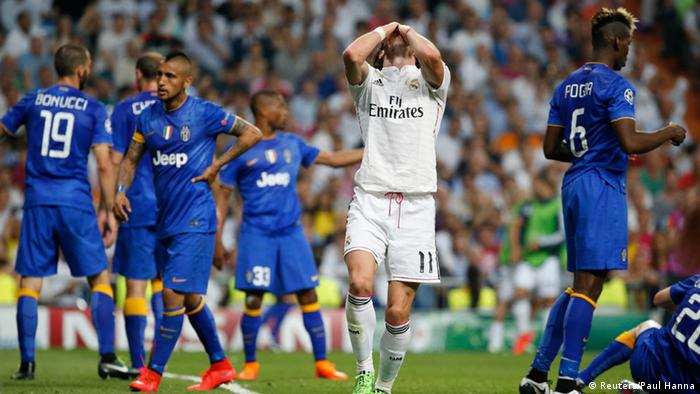 It was a frustrating night in front of goal for Madrid, only beating Buffon with a penalty

The second half started slowly with limited chances for either side. But Juventus always looked threatening. Striker Carlos Tevez was dropping deep to collect the ball, whilst Andrea Pirlo was finding space to orchestrate the attacks. Twelve minutes into the second half, Juventus had their goal.

Paul Pogba won a header against Sergio Ramos, which fell to Alvaro Morata in the box. The former Real Madrid forward did well to control ahead of Toni Kroos' weak challenge and finish for his second goal of the tie against his previous employer. Half of his Juventus goals have come against the Spanish side.

Claudio Marchisio should have had his Juventus team ahead on the night after he picked up Arturo Vidal's through ball, but he couldn't beat a stretching Casillas. Gareth Bale could have then had Madrid level twice in the space of five minutes. Ronaldo's dinked cross to the back post was headed over the bar from close range by the Welshman, before he again headed into the stands from a corner.

Pogba had one last chance toward the end, but his close ranged shot went straight at Casillas. Juventus held on to clinch a first Champions League final place since 2003 and will face Barcelona in the final on June 6.

Bayern Munich restored some pride in the second leg with a 3-2 victory, but ultimately paid the price for the first leg defeat in Barcelona. The Spanish side will play either Juventus or Real Madrid in the final. (12.05.2015)