Bayern Munich restored some pride in the second leg with a 3-2 victory, but ultimately paid the price for the first leg defeat in Barcelona. The Spanish side will play either Juventus or Real Madrid in the final. 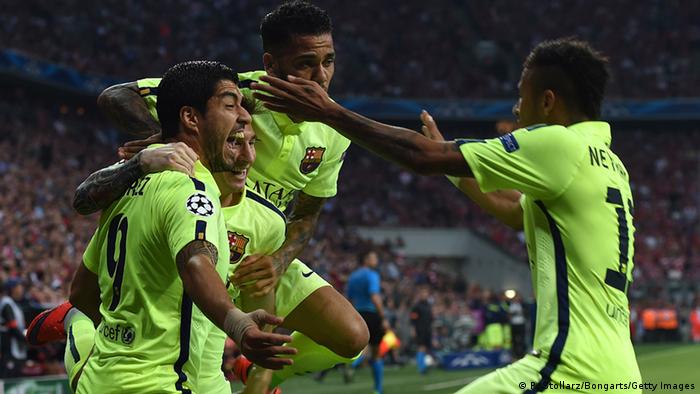 Bayern Munich has dropped out of the UEFA Champions League at the semifinals stage for the second successive season after a 5-3 aggregate defeat to Barcelona.

Despite winning 3-2 on the night, Bayern's 3-0 defeat at the Camp Nou last Wednesday proved decisive as they lost out in their fourth semifinal clash in the last five seasons. Mehdi Benatia's opener offered hope for the home crowd before Neymar bagged a brace to leave the German champions needing five goals to progress.

Robert Lewandowski and Thomas Müller hit the net after the break, but those efforts were in vain with the tie already out of Bayern's reach. Pep Guardiola's men will need to settle for just the league championship this season after the recent German Cup defeat quashed ambitions of another treble.

Bayern could have hardly scripted a better start to the game as Moroccan defender Benatia was afforded yards of space to power his header past former Borussia Mönchengladbach keeper Marc-Andre Ter Stegen in the sixth minute.

But as the German champions pressed for the second that would have turned the heat on Luis Enrique's side, Barca pounced at the other end to kill the contest after 14 minutes. The trio struck: Lionel Messi found Luis Suarez in the penalty box, the Uruguayan pulling the ball square for Neymar who netted his eighth Champions League goal in 12 games this season.

On 29 minutes, Barca added a second on the counterattack with Bayern stretched at the back. Neymar was presented the ball at the back-post and he took time to adjust his feet before drilling into the bottom corner of the net. Creating chances proved no problem for Bayern who were thwarted on a number of occasions by Ter Stegen. With the half-time break approaching, the German keeper clawed the ball off the line after a superb one-handed parry from Lewandowski's initial shot.

Lewandowski finally got the better of the Barca stopper with the equalizer on 59 minutes. The Polish striker, sporting a mask after a collision that left him with a broken nose and jaw, swiveled past Javier Mascherano and sent the ball into the net from 10 yards.

Bayern forced the question of the Barca defense thereafter and Müller saw a shot from long-range deflect wide. But on 73 minutes, the forward opened his body and scored after a neat lay-off from Bastian Schweinsteiger on the edge of the box.

Guardiola introduced Javi Martinez and Mario Götze from the bench in the closing stages but they couldn't stop the Spaniard from suffering defeat in the last-four for the second time since taking charge at the Allianz Arena. Having reinforced his intentions to see out his contract - which expires in 2016 - the two-time winner of the competition will look to add a third next season as Bayern boss.

Meanwhile, Barcelona, chasing their fifth title, will face either arch-rivals Real Madrid or Juventus in the final, which is held in Berlin on June 6, 2015.

As it happened: Bayern Munich vs. Barcelona

Bayern Munich restored some pride after a 3-2 win over Barcelona in their Champions League semifinal second leg. But the 3-0 defeat from the first leg proved one step too far to turnover. Relive the action. (12.05.2015)