An incredible 4-0 win for his Liverpool side over Barcelona sends Jürgen Klopp to his second consecutive final. While Klopp continues to impress, the other German left in the Champions League had a night to forget. 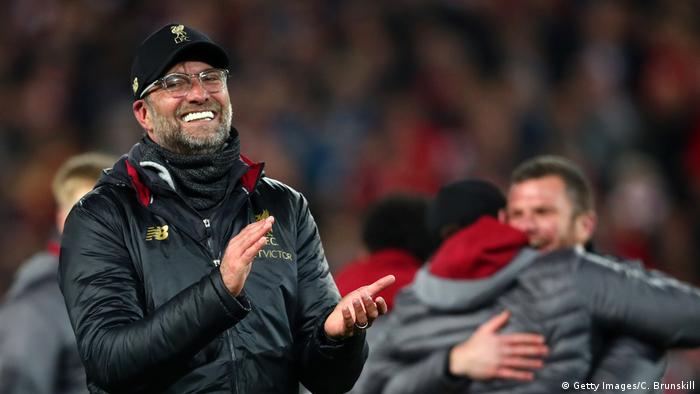 As coaching staff, substitutes and a few ecstatic fans sprinted towards the Kop after the final whistle blew on the most remarkable of comebacks, Jürgen Klopp went against the grain.

The German boss turned away to embrace the injured Mohamed Salah, who was donning a "Never Give Up" T-Shirt, before jogging to catch Sadio Mane. When the 51-year-old succeeded where so many Barcelona defenders had failed, he wrapped his arms around the Senegalese forward before lifting him up off his feet and towards the heavens.

In a game of scarcely credible moments, this was the one that seemed most symbolic of what the German coach has achieved with the English club. As much as this was a performance of skill, commitment and tactical nous, it was a victory forged in the unity of purpose and ideology of a club, coach, playing group and fanbase all singing from the same hymn sheet and raising their collective level.

"We know that this club is the mix of atmosphere, emotion, desire and football quality," Klopp said after the game. "We've said it before, for me this club has a big heart and tonight it was obviously pounding like crazy. You could probably hear it and feel it all over the world."

Klopp has overseen dramatic comebacks here and elsewhere but never quite like this. His pregame talk of not giving up, of hope and of a "football party" to be held with "legs and lungs" powered a remarkable display from a team that do not recognize the impossible, even when they’re missing two of their three most potent weapons — Salah and Roberto Firmino were out injured for the match.

From the moment the teams walked out, Klopp, his team and the Kop felt as one. The home side, like their boss, were driven by the emotion of the evening while always aware of the need for control. In the opening minutes, Klopp's trademark press was relentless, with the Catalan pass masters clearly rattled by the intensity on the pitch, in the technical area and in the stands.

With just seven minutes gone, that hope – and that noise – ratcheted up a notch. Jordi Alba misjudged a simple long ball allowing Sadio Mane to play in Jordan Henderson. German keeper Marc-Andre ter Stegen could only palm the Liverpool skipper's effort out to Divock Origi, who tapped home the opener.

Barca started to settle for a time but Klopp clapped, cheered and cajoled his charges, and even found time to control a stray pass with an elegant drag-back. While their ferocious start subsided somewhat, Liverpool were still testing Klopp’s compatriot between the Barca sticks.

Ter Stegen, the only other German left in the competition in the semifinals, initially looked equal to the task, pushing away a stinging Andrew Robertson drive and racing quickly off his line to deny Mane a chance for the second. At the other end, Alisson Becker was equally busy, making a number of crucial saves in the knowledge that one away goal would leave Liverpool needing five.

As much as moments of brilliance, so many late stage Champions League games turn on errors. In previous rounds, both these sides had benefited from goalkeeping gaffes —Manuel Neuer handing Mane a goal in Munich and David de Gea doing the same to Messi in the Camp Nou. 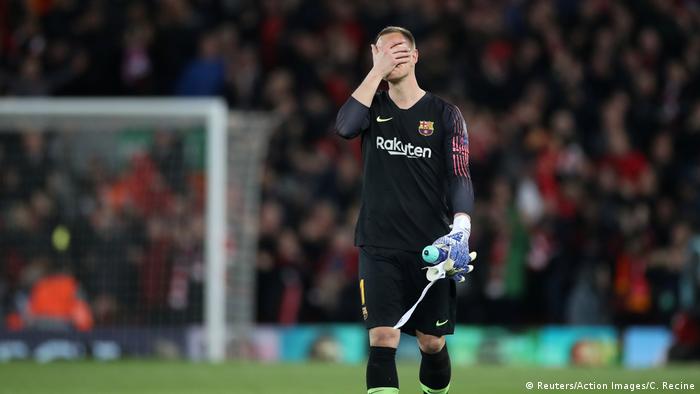 Marc-Andre ter Stegen holds his head after the loss

"After the game I told De Gea that we are all humans and that this could have happened to me as well," said ter Stegen at the time. "The truth is that it took me a while to celebrate that goal, because he shares the same position as me, and I share his pain."

If ter Stegen felt pain then, it's difficult to imagine what he and his teammates will feel after Tuesday night. Georginio Wijnaldum's 54th minute strike was powerful, but a man regarded as one of the world's best keepers should have kept it out. As Liverpool rushed to retrieve the ball from the net, ter Stegen tried desperately to claw it back. But he couldn't keep hold of it or turn the tide and 122 seconds later he was stooping again as Wijnaldum's header flew past him to level up the tie.

It seems absurd to say of a side who habitually play in the biggest fixtures and in front of the most hostile crowds but Barcelona were shell-shocked. How else to explain the lapse in concentration that allowed Trent Alexander-Arnold to deceive them by faking to walk away from a corner only to stroke the ball to Origi to put Liverpool ahead?

As 89 minutes ticked over to 90, Klopp hopped with frustration on the touchline after the fourth official denied him the chance to bring on Daniel Sturridge as a substitute. A few minutes later he was embracing Mane, just as he has this club and their fans.

Now he knows he must break his finals curse and lift not just his team but the Champions League trophy. He can certainly count on plenty of support.

Liverpool supporters are hoping Jürgen Klopp can lead their team to their first ever Premier League title. Ahead of the first leg of their UCL semifinal clash with Barcelona, he told DW why losing is also important. (30.04.2019)

As Jürgen Klopp tries to plot a course on two fronts, his impact is being felt further down the English league pyramid. German bosses could still take the title in England's top three divisions. What makes them so good? (03.05.2019)