Champions League final: Mutual respect for Klopp and Pochettino but eyes on prize

Jürgen Klopp and Mauricio Pochettino are both adored by their clubs and fans and have enormous respect for each other. But on Saturday, the pleasantries will be set aside as Liverpool and Spurs clash in Madrid. 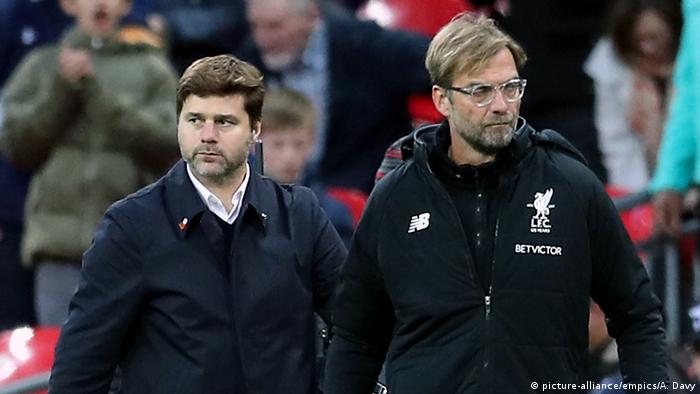 "I must be the world record holder for winning semifinals but if I wrote a book about it probably no-one would buy it!"

Jürgen Klopp was in typically ebullient form in his final press conference before Saturday's Champions League final in Madrid but within that quip was an acknowledgement that Liverpool's German boss has lost his last six finals.

The most recent of those was last season's loss to Real Madrid in the same competition but Klopp sees that painful defeat as a learning experience. "We are a completely different team to last year. We used the final as the next step," he added on Friday, having previously described losing as a "strong medicine" in a DW interview.

There is some evidence to back up the 51-year-old's claims, with the Reds having claimed 22 more Premier League points this season than in 2017-18. As impressive as their consistency has been domestically, it was the breathtaking, Anfield-inspired comeback against Barcelona in the semifinal that perhaps best summed up the happy marriage between coach and club. "We fell in love with each other," as Klopp put in on Friday.

As Mauricio Pochettino applauded the Spurs fans in the away end of the Amsterdam Arena with tears streaming from his eyes, that same mutual affection was clear between the Argentinian and his club on the night of their own dramatic recovery.

Despite some suggestion that Pochettino may be looking to leave the club in the not too distant future, his body of work in North London speaks for itself. Like his opposite number Pochettino, yet to win a trophy as a coach, knows how significant breaking that duck would be but recognizes the size of the challenge.

"Liverpool are a great team. I think with Manchester City, the best team in England," the 47-year-old said on Friday. "They were competing head-to-head in the Premier League and of course have had an unbelievable Champions League. Full credit to Jurgen Klopp, fantastic manager."

Klopp was equally glowing in his assesment of his rival: "I respect a lot what Pochettino did - he had a talented group and how they improve together is really impressive. I like that."

Pochettino added that he was yet to decide on his team, with the fitness of Harry Kane still in question. The club will make a call on the English striker's fitness after a final training session on Friday night.

For his part, Klopp confirmed that forward Roberto Firmino had returned to full fitness but was more coy on whether the Brazilian would start for the first time since April 21.

While the respect between the two bosses is evident and genuine, neither will be prepared to give an inch in the Wanda Metropolitano on Saturday night. Whatever happens, neither will lose the respect and adulation of their fans but both are desperate for something a little more tangible, like a trophy.

Jürgen Klopp has lost six of his seven finals. Against Mauricio Pochettino in Madrid, can Klopp overcome his bad record and guide his Liverpool team to victory? Follow live build-up here! (31.05.2019)

Premier League should be wary of European hype

Many see Saturday’s all-English Champions League final as the start of a new era of Premier League dominance in European competitions. One look at the all-German 2013 final shows that might not be the case. (31.05.2019)