It was once mocked for its exposed pipes. Never intended as a temple to high-brow culture, Paris' Centre Pompidou is a museum that doesn't look like one. It's as little elitist as necessary and as open as possible.

It's best to come in the evening, when the Centre Pompidou, with its illuminated pipes, looks like a nuclear power plant or a beautifully eerie monster made of steel.

Passing tourists stop in their tracks to take a snapshot of the building or watch one of the nearby street artists thrust a knife down their throat or spit fire.

The Centre Pompidou is a must for all visitors to the French capital. Some three million visitors a year stand in line to get inside. Rigorous security checks have been in place long before the terror attacks on "Charlie Hebdo," the Bataclan and the Stade de France. 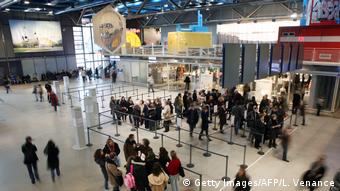 With the Centre Pompidou, French President Georges Pompidou, who took office in 1969, left behind a cultural monument for eternity. The idea of founding a representational museum for 20th-century art had been around since the post-war Charles de Gaulle era, but it was his successor Pompidou who realized it.

It opened on January 31, 1977 and, at the beginning, the cultural center was controversial. Critics mockingly referred to the modern construction as the "Notre Dame of Pipes" or as an "oil refinery." It was meant to be an entirely new kind of cultural center, something that had never existed before. It would unite a library, national museum for contemporary art, institute for experimental music, cinema, lecture halls and special exhibition halls all under one roof.

Tonight, I'm lucky. I have a "laisser-passer" pass that allows me to skip to the front of every line - although they're not very long on this chilly Friday evening. Once inside, the foyer on the first floor is unusually empty. 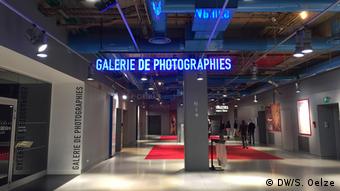 A cinema and a photo gallery are on the first floor

Illuminated letters, which lend the Centre a kind of Las Vegas feeling, guide visitors to the six floors. If you take the escalator for the first floor, you'll come to the photography section and the cinema.

The annual film festival at the Centre Pompidou is legendary. Here, avant-garde directors from all over the world, from China to Africa, can be discovered. The photography collection is impressively comprehensive and contains 100,000 prints, with constant additions.

If you take the escalator from floor one to three, you pass the Galerie des enfants in between. The Centre Pompidou is one of the first museums to set up an area exclusively dedicated to pedagogical material for children. Kids don't have to make a reservation to build, paint or watch films about famous architects.

Many tourists skip over the first three floors, although the three-story library is certainly worth a visit. Sometimes there are exhibitions there as well; at the moment there is one on French comic hero "Gaston." However, most of those who come to stand in line are here to read one or more of the 430,000 books, magazines and documents in the library.

There is no hidden archive - all the books are on display on the shelves. The digitally up-to-date library offers computers where you can learn over 100 languages or write your thesis. Or you can just relax with a newspaper and enjoy having a roof over your head. For many of the homeless in Paris, the library has become a good way to spend the day. In total, nearly one million people visit the library at the Centre Pompidou each year. 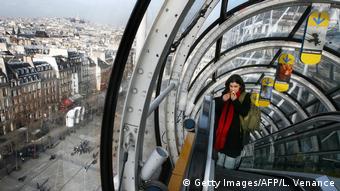 The escalators are a highlight of the museum experience

Once you've made it to the fourth floor, you're rewarded with a breathtaking view. This is where the permanent collection - comprising 1,600 artworks - is housed. Some 200 works by Kandinsky, 250 by Matisse and 150 by Picasso are part of the collection - and entrance is free on the first Sunday of each month.

Because the Centre was designed so openly and with a great deal of glass, walls had to be built in the museum in order to hang the paintings and protect them from excess light. Those were things architects Richard Roger and Renzo Piano didn't consider in their design.

I still haven't mentioned the grandest part of Centre Pompidou: the transparent escalators. Once you've ridden up the zig-zag escalators housed in glass tubes, you'll never want to leave the building. As you ascend, you can glimpse more and more of the city - the alleys in the surrounding Les Halles district, the Bourse and even Sacré Coeur and the Eiffel Tower at the horizon. Light installations by François Morellet are on show

From the fourth floor, you can take the the see-through escalator - which, by the way, is not free of charge - to the fifth floor for some refreshments in the café or restaurant. The viewing platforms, which are particularly spectacular at night, are also located on this floor. Since the Centre Pompidou is open every day until 10:00 pm, there are plenty of opportunities to enjoy the Paris skyline by night.

In recent years, the Centre Pompidou has expanded beyond Paris. In 2010, a branch was opened in Metz, in southeastern France, and another in the Spanish city of Málaga in 2015. Last fall, the institute announced it was planning a branch in Brussels starting in 2020.

But first, it's time to celebrate - and not just in Paris, but in 40 cities around France, from Toulouse to Lille. On the weekend after Centre Pompidou's birthday (February 4-5), it is going back to its democratic roots. For two days, all of the exhibitions and events are free of charge.

Installation artist Christo, famous for wrapping Berlin's Reichstag, had planned to drape Colorado's Arkansas River with fabric. Now he's abandoned the idea because the land is under the management of President Trump. (27.01.2017)

Star photographer Juergen Teller goes back to his roots

Fashion photography without fancy clothes, stars in unflattering poses: Photographer Juergen Teller explores the contradictions between art and commerce. Now a museum near his hometown is featuring his works. (23.01.2017)

Software giant SAP co-founder Hasso Plattner is one of the wealthiest people in Germany and a patron of the arts and sciences. He told DW why he's giving Potsdam a new museum. (23.01.2017)