Star photographer Juergen Teller goes back to his roots

Fashion photography without fancy clothes, stars in unflattering poses: Photographer Juergen Teller explores the contradictions between art and commerce. Now a museum near his hometown is featuring his works.

He made a name for himself with candid photos of stars like Kurt Cobain, Kate Moss and Kim Kardashian. Now star German photographer Juergen Teller is going back to his roots with a solo show at the Kunstpalais in Erlangen in southern Germany through April 23, 2017.

Born in Bubenreuth near Erlangen to a family of musical instrument makers, he studied photography in Munich before moving to London to become a freelance photographer. Teller continues to live in the English metropolis. 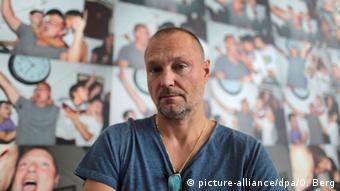 Juergen Teller deliberately distances himself from the usual glamour in fashion photography - and that's what made his campaigns for designers like Vivienne Westwood or Marc Jacobs so remarkable. Sometimes he chooses to photograph his own family members instead of professional models, such as for a catalogue of a jewelry auction held by Phillips de Pury & Col. In 2005.

The Kunstpalais exhibition focuses in particular on works by Teller that have a connection to his home region and his family.

Click through the gallery above for a glimpse of Teller's oeuvre, some of which is on display at the Kunstpalais in Erlangen.

Why Muhammad Ali was a work of art

Muhammad Ali was not just one of the greatest ever boxers. He was a media-savvy cultural icon who is part of the history of photography. On what would've have been his 75th birthday, we look at Ali as a photo muse. (17.01.2017)

Why smartphones are not a threat to professional photography

The iPhone has revolutionized photography over the past decade and platforms like Instagram have created a new market. But photographer Ditmar Schädel tells DW why quality is still critical. (09.01.2017)