Central Europe to face extreme droughts without climate action | Europe| News and current affairs from around the continent | DW | 06.08.2020

Researchers have predicted a sevenfold increase in the number of consecutive summer droughts in Central Europe. The study cites the first consecutive droughts — in 2018 and 2019 — in more than 250 years. 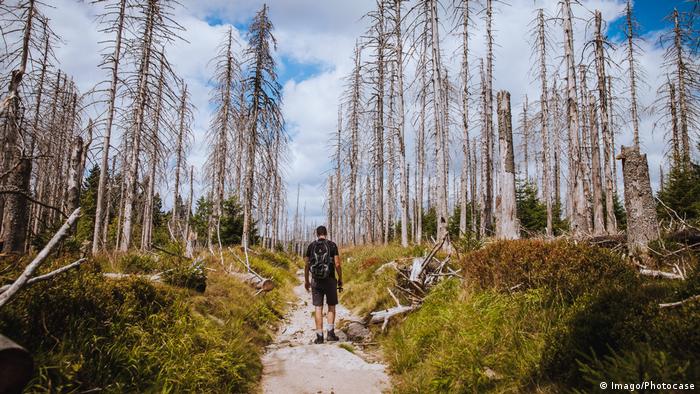 Central Europe will see a significant increase in droughts towards the end of the century if greenhouse gas emissions aren't reduced, according to a study led by the Helmholtz Center for Environmental Research.

Researchers predict, assuming the highest increase in greenhouse gases by 2100, a sevenfold increase in the number of consecutive summer droughts in Central Europe in the second half of the 21st century.

"In the past two decades, Europe experienced an increased frequency of droughts, with estimated loss of about €100 billion ($119 billion)," according to the study.

The study, published in the Scientific Reports journal, cited the years 2018 and 2019, which were both marked by unusually severe drought periods when compared with climate data from the past 250 years.

"The impact [of the 2018 and 2019 droughts] was strongest in the Central European region, where the increase in temperature was accompanied by concurrent significant reduction of summer precipitation, which led to extreme drought conditions," the study said.

Read more:Farming in the desert: Are vertical farms the solution to saving water?

The results showed that since 1766, there have not been two such successive and widespread droughts as were seen in 2018 and 2019 in Central Europe. The droughts impacted more than 50% of the region.

Additionally, agricultural areas affected by the possible drought could increase by more than 40 million hectares, the researchers found.

"It is important that we recognize the significance of droughts in consecutive years and develop a holistic framework for modelling the risk," one of the authors of the study, Rohini Kumar, wrote.