Catalonia referendum finds allies in the heart of Madrid | Europe| News and current affairs from around the continent | DW | 29.09.2017

Catalonia referendum finds allies in the heart of Madrid

The crash course set by the governments of Spain and Catalonia over an independence vote seems unavoidable now. Meanwhile, an unexpected pro-referendum movement has blossomed in Madrid, Santiago Saez reports. 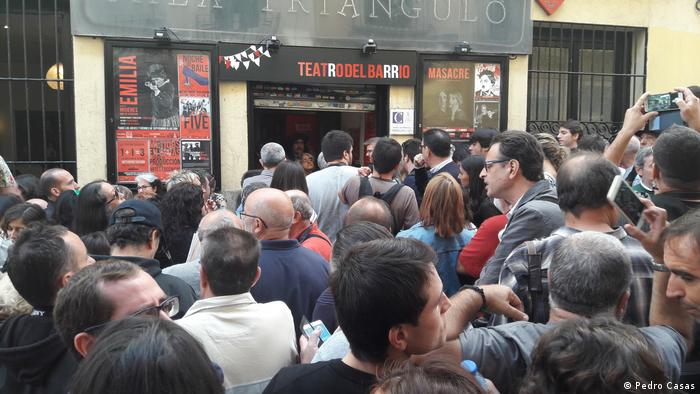 On September 17, the street was full with people singing "L'Estaca." The anthem, written in Catalan by Lluis Llach, was a call for unity in the fight for freedom against Spain's dictatorship and a popular symbol in the 1970s. Llach had had to cancel his appearance at the event at the last minute, but people still showed up in great numbers. Around 1,000 of them, according to the organizers, couldn't access the packed theater. A few estelades — Catalan pro-independence flags — were visible here and there. It could have been Barcelona, but it was the Spanish capital, Madrid.

"It was like an awakening, like a catharsis. Lots of people suddenly realized that there were others who thought like them, that they were not alone," says Pedro Casas, one of the organizers of the event, which took place in Lavapies, a popular neighborhood in the city center. Casas speaks in the name of Madrilenos Por El Derecho A Decidir (Madrilenians for the Right to Decide), a grassroots group that supports Catalan self-determination. And he doesn't think the people he represents are a minority: "If it was not for the media bombing us all the time, most people would probably support the referendum," he says.

Read more: Catalan independence — what you need to know

As summer temperatures linger on in the city, Casas, who made an unsuccessful bid for a City Hall seat with the left-wing Podemos party in 2015, sips a glass of grape juice on a terrace in Carabanchel, his home neighborhood in southwestern Madrid. Despite his affiliation, he insists that Madrilenos Por El Derecho A Decidir is not a partisan group, although he acknowledges the members and sympathizers are mostly left-wing.

Spain's Constitutional Court suspended the regional laws that regulated the referendum on September 8, after considering a request from the central government. From that moment, organizing the vote became illegal, and 14 high-ranking officials from the Catalan government have been arrested since. The central government took control of the regional security forces, and an unprecedented amount of police has gathered in the region to make voting impossible on Sunday.

Pedro Casas thinks it's all a political maneuver: "The referendum shouldn't be illegal in itself. It's a matter of political will. Of course, the issue we're talking about here is the independence of Catalonia, and that's in conflict with the constitution. However, they should be able to vote, and then, if there's a majority in support of independence, the next step would be to reform the law," he says.

Calm before the storm

Antonio Maestre, a Madrid journalist, recently visited Catalonia: "I noticed a very tense atmosphere. It's calm so far because people with opposing ideologies haven't shared the same spaces yet, but there could be problems if the state doesn't manage its repressive capacity well. There's too much ideology on the street."

Yet, tension is not only tangible in the northeastern region. There is a feeling of fracture in Spanish society that crystallized on Monday morning, when Spanish social media was full of videos of people cheering police as the agents set off for Catalonia to prevent the referendum. The videos soon appeared in traditional media and there to became the subject of a passionate debate: Is society really overwhelmingly opposed to a vote in Catalonia? 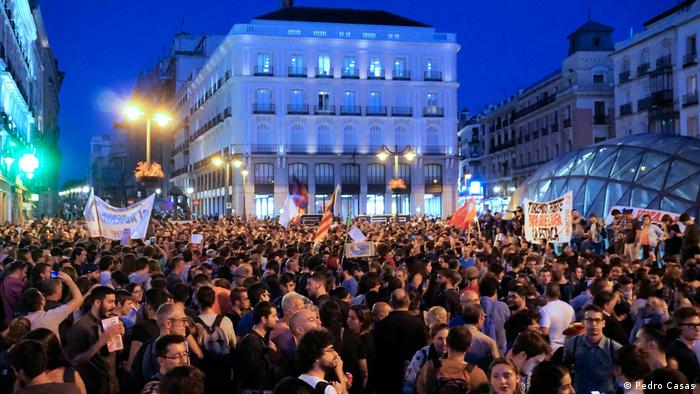 On the contrary, says Pedro Casas: "Some people want us to think that in Spain there's massive support of the use of force, but that's a lie. Those people exist, but Spanish society is mostly very open and tolerant. The other day, in the Puerta del Sol demonstration, there were 3,000-4,000 people supporting the right to decide and only a few dozen with Spanish and Falange [a far-right party] flags against it. They want to make us think that Spain hates the Catalans, like they used to tell us we hated the Basque. That's a lie."

Read more: Madrid tries to tear down a dictator's memory

For Maestre on the other hand, the videos represent a significant segment of society: "It's an expression of Spanish ultra-nationalism that understands its motherland only in opposition to its perceived opponents, the Catalan people in this case. This feeling comes from the 19th century and is related to a militant Catholic view that fought the enemies of the church. Without being fascists, they come directly from the social structure of Francoism [the system under Spain's dictator, Franco — Editor's note]. People have turned politics into a football match, and everything is polarized."

Madrilenos Por El Derecho A Decidir isn't standing in disinterested solidarity with the Catalans who want to cast a ballot on Sunday. The matter goes beyond that for them, toward full reformation of the state model, which they see as starting on October 1 with the Catalan independence vote.

According to Antonio Maestre, "There are many people in Spain who don't really care about Catalan independence, but have very identifiable political positions in other terms, such as a preference for a Republican model or opposition to the governing party. They consider this a good opportunity to open Pandora's box and challenge a regime that is otherwise monolithic."

Casas agreed: "We also want to vote on many things, such as the monarchy, because we couldn't decide during the transition [to democracy]. So the struggle of the Catalan people is our struggle too. It's not about supporting independence. That decision belongs to them, but there are other questions that we must decide here, too."