FC Barcelona and the Catalan independence movement | Europe| News and current affairs from around the continent | DW | 12.09.2015

During Spain's Franco dictatorship, FC Barcelona became a symbol of Catalan identity. The generalisimo is long gone, but the football club has not lost its significance to the autonomous region of Catalonia. 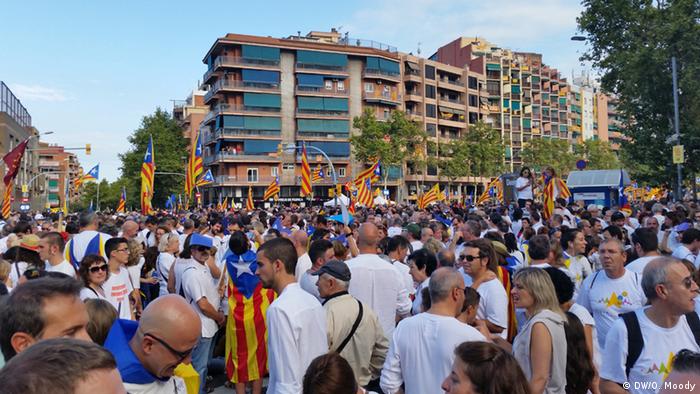 Chants went up for independence along Barcelona's Avinguda Meridiana. September 11 was Catalan National Day, a celebration of local pride that has recently developed into a key date for the autonomous region's independence movement. Along 5 kilometers (3 miles) of one of Barcelona's main traffic arteries, the senyera - the red-and-yellow-striped flag of Catalonia - was flying. However, the flag was not the only symbol of Catalan identity filling the street.

The drive for Catalan independence is as much a social movement as it is a political one. It's hard to avoid the topic, even in spaces that might normally be considered apolitical. One of the strongest examples of this is the independence movement's connection to FC Barcelona.

The club have long been a standard bearer for Catalan identity, a reputation built up during Spain's years of oppression under the dictatorship of Generalisimo Francisco Franco. Their motto, "More than a club," points to the team's history as a symbol of pride for Catalans at a time when celebrating their region's history and culture meant risking punishment. The dictatorship is long gone, but the football club has not lost its significance to the region.

"They represent Catalonia," said Marina, one of about 1.4 million people to attend Friday's demonstration. "They do a lot of things to help the people and the movement, too." 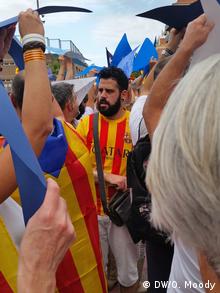 Her father, Toni, agreed: "For example, they brought out a kit in the colors of the Senyera." That kit was certainly popular. Though many people tied flags around their necks, plenty of others wore yellow-and-red football shirts.

In keeping with the team's history, Barcelona's Camp Nou stadium has become a hub for supporters of self-rule. "At 17 minutes and 14 seconds into each half, the fans start chanting 'independence'," Marina said. The timing relates to the year when Catalonia first became part of Spain. 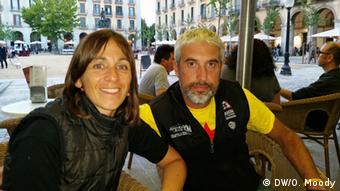 Laura and David support the team - and the movement

I heard about the chants again in Girona, in the heart of Catalonia. There, I met Laura and David, who belong to a local Barcelona fan group and are staunch supporters of Catalan independence. They say the chants are a sign of how Barcelona fans influence their club. Like Marina and Toni, the couple believe in the team's motto. "It's still more than a club," Laura said. "It represents more than football. They're ambassadors for Catalonia."

FC Barcelona have stopped short of officially joining the independence movement. Club president Josep Maria Bartomeu has, though, signed a pact calling for self-determination in Catalonia, essentially supporting demands for a referendum. Despite David's strong views on the issue, he thinks FC Barcelona are right to seek the middle ground. "It's a huge organization, with a lot of members who have different opinions," he said. "Some of them are against independence, so it wouldn't be right for the club to take a pro-independence stance."

That does not mean that people associated with the club cannot be more vocal, however. Bayern Munich coach Pep Guardiola, who spent 23 years at Barcelona as a player and coach, is one of the most prominent figures in the independence movement. He has put his name on a list of candidates for a coalition of pro-independence parties in regional elections taking place later this month. It's a symbolic gesture rather than a first step into politics for Guardiola, but one that has garnered media attention around Europe.

For Laura, it is crucial that people with links to Barcelona make their feelings on the issue clear. "When they express an opinion, it helps to connect the club with the movement, even though the club has to stay neutral," she said. But it also comes down to simple publicity: "It's important because when they speak, people listen."

The issue of publicity brings up a difficult question for fans though. "Barcelona win a lot, so they're a great brand for the movement to be connected to," Laura said. "But it mustn't lose its soul."

Back in Barcelona, I asked Marina whether that was in fact happening with the team itself. "A couple of seasons back, there were a lot of Catalan players in the team. Now there are only a few," she conceded. "It's understandable, though. Not enough young Catalan players have come through to replace the ones that have left." Does that mean that, despite all the talk of still being more than a club, Barcelona are actually sacrificing some of their Catalan identity in pursuit of success? "They're doing what they have to do," she said. "After all, they're a football club."