Catalans vote in symbolic independence referendum | Europe | News and current affairs from around the continent | DW | 13.12.2009

Residents of Spain's rich northeast go to the polls this Sunday in a symbolic vote on independence. Organizers hope the plebiscite will underscore Catalonia's desire for even more autonomy from Madrid. 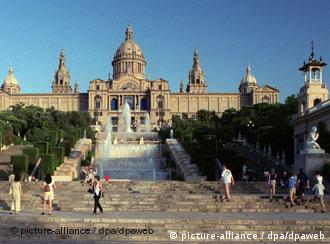 Catalans are proud of their culture and language

The vote on Catalonian independence is not legally binding, but its backers hope that it will put pressure on the region's political parties to call for a real referendum on secession in the future.

Surveys have shown that a sizable minority in Catalonia would like to see the northeastern region, which includes Barcelona, Spain's second-largest city, granted independence beyond the considerable autonomy it already enjoys.

Polls opened in the early morning for some 700,000 people, including many of the region's immigrant population, who represent about 10 percent of Catalonia's population of seven million. 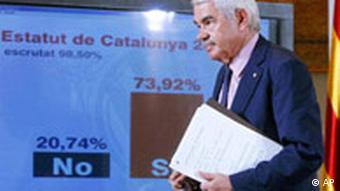 Catalonia accounts for about 25 percent of Spain's gross domestic product and has its own language and customs.

Sunday's vote also comes as Spain's Constitutional Court prepares to rule on the legality of the region's statute of autonomy. There are fears that a negative outcome of that decision could fuel further separatist demands.

The statute, approved by the Spanish parliament and endorsed by Catalan voters in a 2006 referendum, expanded the powers of the regional government.

Catalan regional elections must be held by the end of 2010 and any surge in separatist sentiments could be a serious problem for Spain's Socialist Prime Minister Jose Luis Zapatero. The premier put on a brave face on Friday, exclaiming that "these independence votes are going nowhere."

However, Uriel Bertran, one of the leaders of the pro-independence movement, said "this will be the beginning of an adventure towards self-determination."

Although opinion polls differ on the extent of support for independence in Catalonia, Sunday's poll is viewed as the next step in ratcheting up the autonomy drive. An initial vote in September held in the small town of Arenys de Munt ended with more than 96 percent in favor of independence.

Business and community leaders on the Greek island of Corfu have begun a campaign to achieve autonomy. They say unduly high taxes by the central government threaten the tourist industry on which the island depends. (03.12.2008)