French police have arrested two suspected ETA members who were on their way to a secret weapons cache. In it they found explosive materials that could have been used for making car bombs. 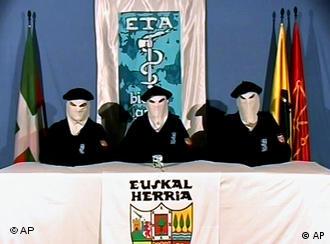 ETA has been fighting for an independent Basque homeland for decades

Police detained two suspects in the Herault area of southwestern France. The men were in possession of handguns and fake French and Spanish identity papers, a judicial source said.

The suspects were believed to be heading for an underground cache of ETA materials buried in the countryside near Montpellier.

Spain's Cadena Ser radio reported that the cache contained material that could have been used for making car bombs.

One of those arrested on Sunday was believed to be the right-hand man of ETA military boss Garikoiotz Aspiazu, who was captured last year.

A third suspected member of ETA was arrested on Saturday when he sought medical treatment for a hand wound near Pau, close to the Spanish border.

Spanish police also discovered a further ETA bomb materials cache on Saturday near Alicante on the eastern coast of Spain. Police seized 10 kilograms of explosives after receiving a tip from a hiker.

ETA is blamed for the deaths of more than 800 people in its armed campaign for an independent Basque homeland straddling parts of southwestern France and northern Spain.

Police have seized a number of weapons caches in southern France in a series of raids since the arrest of three suspected ETA members this week. (21.08.2009)

A massive manhunt continues on the Spanish island of Mallorca as two suspected ETA bombings coincide with the 50th anniversary of the Basque separatist group. The blasts killed two policemen and injured dozens. (31.07.2009)

The armed Basque separatist group ETA has warned that the incoming government of the north-eastern Spanish region lacks "democratic legitimacy" and would therefore become the organisation's "priority target". (12.04.2009)