Catalan parliament speaker Carme Forcadell has been released from prison after she posted bail. She and five other lawmakers face criminal charges that could amount to sentences of up to 30 years. 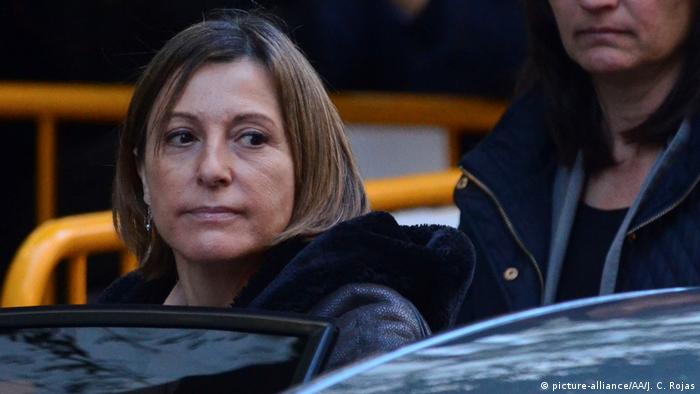 Carme Forcadell, the speaker of Catalonia's sacked parliament, left a prison near Madrid on Friday a few hours after her €150,000 ($175,000) bail was posted — ending her brief detention over the region's bid for independence from Spain.

Five other members of Catalonia's parliament were granted bail Thursday after testifying before Spain's Supreme Court on charges of rebellion, sedition and misappropriation of public funds.

Following Thursday's hearing, Supreme Court magistrate Pablo Llarena ordered that Forcadell be held in custody until she had paid bail and ordered her passport be confiscated. Four other lawmakers were to be held until making bail payments of €25,000 — it was unclear whether they had been freed as well. A sixth parliamentarian was freed without bail.

Prosecutors had asked Llarena to jail Forcadell and three other lawmakers without bail. However, in his ruling, the judge wrote: "All the accused ... have expressed that either they renounce future political activity or, those that remain active, will do it renouncing any actions outside the constitutional framework."

Nevertheless, the range of charges raised by the prosecution could carry a prison sentence of up to 30 years.

Following Catalonia's independence referendum on October 1, which saw voters overwhelmingly support secession from Spain, the Catalan parliament passed a declaration on October 27 proclaiming a new Catalan republic. The vote, however, suffered from turnout of 43 percent and had been declared "illegal" by the Spanish Constitutional Court before any votes were cast.

Following the poll, the Spanish government in Madrid  dismissed Catalonia's parliamentary cabinet and seized control of the assembly. New elections are scheduled for December 21.

According to lawyers familiar with the case, Forcadell sought to avoid custody by telling officials during earlier questioning that the independence vote was merely "declarative and symbolic." However, at trial she will no doubt be reminded of her vocal rebukes against the Spanish government over its efforts to undermine Catalonia's referendum vote, having described Spanish Prime Minister Mariano Rajoy's actions as a "coup" and an "attack against democracy."

Spain's Supreme Court on Thursday also decided to take over two further cases against Forcadell and the five other lawmakers from a Catalan court, implying that Supreme Court magistrates are seeking to centralize all criminal proceedings related to the independence vote.

The court, however, has not signaled any intention to also take over the cases against eight other Catalan lawmakers who remain in detention pending a ruling from the High Court. The High Court on Thursday rejected a request from the ministers' lawyers for their release. The detained ministers face similar provisional charges to those leveled at Forcadell and the other five ministers.

Meanwhile, former Catalan leader Carles Puigdemont and four of his ministers remain in Brussels in self-imposed exile. All five have been ordered to appear before a High Court judge in Madrid next week, with the Spanish government issuing an arrest warrant for their extradition. Puigdemont has ignored the summons, saying that he wants a guarantee that he will be given a fair trial.

In a letter printed in a Catalan newspaper Thursday, Puigdemont and the four other exiled officials said that "it's time to drive away from (Catalan) institutions those who want to own them with a coup d'etat," referring to the unprecedented measures taken by Madrid to seize control of the Catalan assembly.