Catalonia's separatist president has pledged that the region will have a "legal and binding referendum" next year on seceding from Spain. As ever, Madrid has been prompt to pour cold water on the notion. 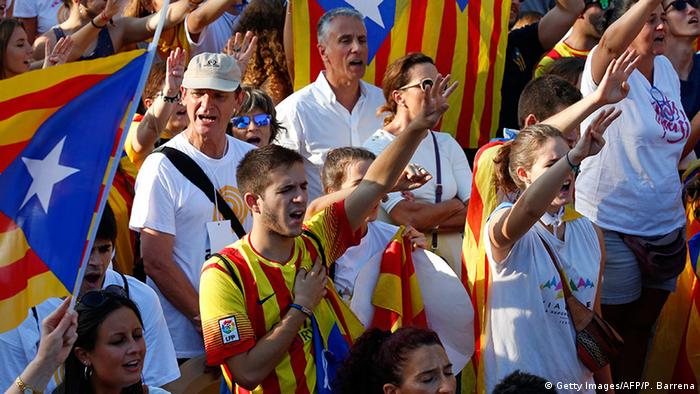 During a televised message at the regional government headquarters in Barcelona on Friday, Catalonia's president vowed that next year the region will be able to "freely decide our own future through a legal and binding referendum."

The regional Catalan government had announced in the fall that it will hold a referendum on secession from Spain by September 2017, with or without consent from Madrid's central government. However, Spain's Constitutional Court suspended the resolution pending a five-month period in which the court may decide to ban the vote for good.

Although Catalan President Carles Puigdemont vowed on Friday that the vote would "be called in accordance with the mandate of our laws," it remains unclear how this will be achieved without Madrid's backing or if the court were to ban such a vote.

"It is not possible to hold a referendum that will do away with national sovereignty and the equality of Spaniards," Rajoy said at an end-of-year press conference, adding that such a referendum was clearly against the law.

"This is not going anywhere; I'm offering something which is a lot more reasonable - dialog," Rajoy said. "I ask that no more steps are taken in the opposite direction."

Since being sworn in for a second term in November, Rajoy's government has sought to thaw relations with the northeast region by offering to negotiate a list of economic and social demands made by Puigdemont. However, independence, according to Madrid, remains firmly off the table.

In 2014, Catalonia held a symbolic vote on seceding from Spain after Madrid legally blocked the possibility of a formal ballot. More than 80 percent of voters cast their ballot for independence, although turnout was low with just over one-third of 6.3 million eligible voters taking part.

However, a number of senior separatist lawmakers involved in the vote have since faced sanctions or trials for pursuing measures the Constitutional Court deemed illegal. Former Catalonia President Artur Mas, who organized the symbolic referendum, is due to stand trial for charges of serious disobedience and malfeasance. If found guilty, he faces a 10-year ban from holding public office.

The attack in Barcelona and the incident in Cambrils could very well have political consequences for the future of Catalonia. Independence efforts may suffer a major setback, reports Stefanie Müller in Madrid. (18.08.2017)