A helicopter taking part in a NATO Mediterranean operation has gone missing in the sea between Greece and Italy. The helicopter had been operating off a Canadian frigate. 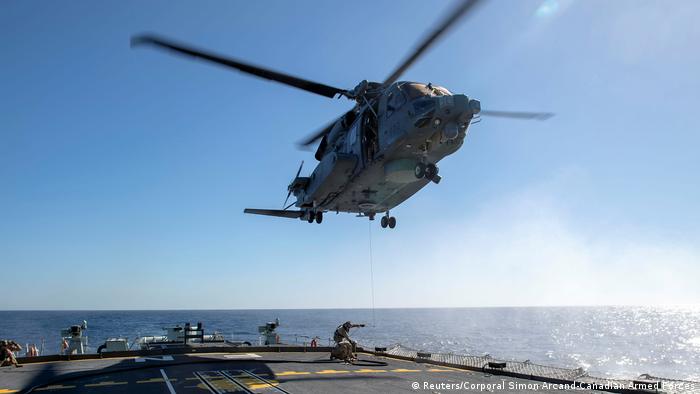 A Canadian military helicopter was reported missing about 50 nautical miles (90 kilometers) off the Greek island Kefalonia on Wednesday, initially by the Greek air force.

Canadian Prime Minister Justin Trudeau later confirmed the incident and said he had spoken with his Defense Minister Harjit Singh.

"Updates will be provided as soon as possible," Trudeau added, saying that search and rescue efforts were underway.

The Canadian military said that "search efforts continue" but also confirmed on Twitter that "we have contacted all primary family members of those who were on board the CH-148."

"Debris has been found in Italy’s zone of control and intervention" in the Ionian Sea. "Greece has sent a marine helicopter to participate in the rescue operation."

Where was the helicopter operating?

It had taken off from the Canadian frigate HMCS Fredericton, which was operating as part of a NATO surveillance force in the area.

Italian, Greek and Turkish frigates were also taking part in the patrol.

Canada's Cyclone helicopters typically carry a crew of four with space for several passengers. They are usually based on naval vessels.

A spokesperson for NATO's strategic military command Supreme Headquarters Allied Powers Europe (SHAPE) confirmed there had been "an incident involving a helicopter from a ship under NATO command."

"There is currently a search and rescue operation being conducted and national notifications taking place," the spokesperson said.

The Canadian military only started using the Cyclone helicopters, manufactured by Sikorsky, on missions in late 2018 following more than 10 years of delays, developmental challenges and cost overruns.