Canada: Hundreds of unmarked graves found at another Indigenous school

A First Nation has uncovered over 700 unmarked graves at a former Indigenous residential school in southern Saskatchewan. Canada's PM said the country needed to face its history of racism. 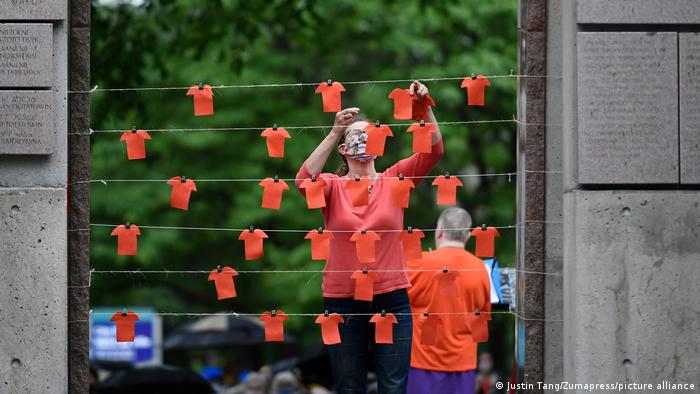 The bodies of 751 Indigenous children were discovered in unmarked graves at a former residential school in Canada, local media reported on Wednesday and the chief of an Indigenous nation confirmed on Thursday.

"This was a crime against humanity, an assault on First Nations," said Chief Bobby Cameron of the Federation of Sovereign Indigenous First Nations. "We will not stop until we find all the bodies."

The revelation follows the unearthing of 215 children's remains

— some as young as three — at a different Indigenous residential school in the province of British Columbia last month.

Canadian Prime Minister Justin Trudeau said his country needed to acknowledge its history of racism against Indigenous peoples to "build a better future."

He said the discovery of hundreds of children's bodies was "a shameful reminder of the systemic racism, discrimination, and injustice that Indigenous peoples have faced — and continue to face."

What do we know about the graves?

Members of the Cowessess First Nation and Canada's Federation of Sovereign Indigenous First Nations (FSIN) said that the graves were found at the former Marieval Indian Residential School in Saskatchewan province.

The former school, which operated between 1899 to 1997, is located close to where the Cowessess now reside, some 140 kilometers (87 miles) east of the provincial capital Regina.

The First Nation, who took control of the school's cemetery in 1970, followed calls to investigate all former Indigenous residential schools for possible unmarked graves.

Chief Cadmusn Delmore of the Cowessess said at one point the graves were marked, but he added that the Roman Catholic Church, which operated the school, had removed the markers.

"The pope needs to apologize for what happened," he said. "An apology is one stage in the way of a healing journey."

What were the Indigenous schools?

The Marieval school, like the Kamloops school where bodies were discovered last month, was previously run by the Catholic Church.

The Indigenous schools were a part of Canada's violent history where children were forcibly integrated into the settler communities.

Children were separated from their families and taught to follow the traditions of the European colonizers, including adopting Christianity and forget their own customs and languages. Violence and sexual abuse were widespread.

The Canadian government formally apologized for the inhumane conditions in 2008.

Indigenous groups have pointed to the abuse and isolation as the cause of long-term alcohol and drug abuse problems on First Nation reservations.