The remains of the children, some as young as 3, were found buried on the site of what was once Canada's largest Indigenous residential school. 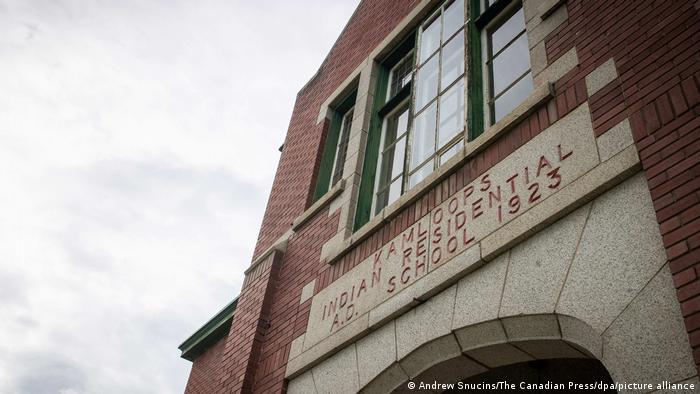 The remains of 215 Indigenous children have been found on the land of a former boarding school that was created to forcibly assimilate children of First Nations origin into Canadian culture.

The discovery was confirmed at the former Kamloops Indian Residential School near the city of Kamloops, some 220 miles or 354 kilometers northeast of Vancouver.

Chief Rosanne Casimir of the Tk'emlups te Secwepemc First Nation on Friday described "an unthinkable loss that was spoken about but never documented by the Kamloops Indian Residential School," and noted that some of the children were 3 years old.

The cause of the deaths is unknown.

Ground-penetrating radar devices were used during the search and researchers think a wider search may well turn up more bodies. 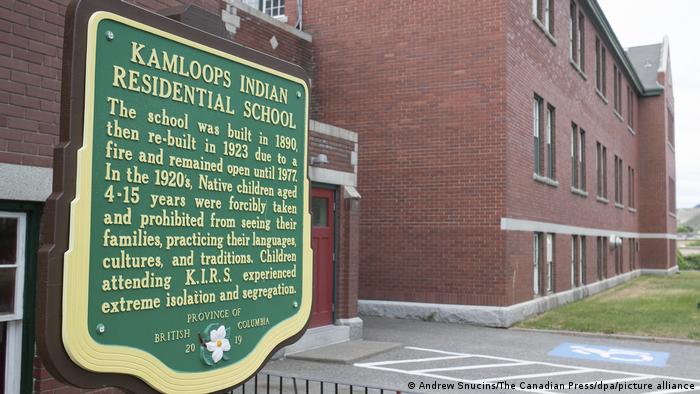 A sign tells how Kamloops pupils were forbidden from seeing their families, practicing their languages or traditions

What was the Kamloops Indian Residential School?

Kamloops was one of more than 100 boarding schools run by the Canadian government and religious institutions from 1840 to 1996.

Their purpose was to "kill the Indian in the child" and assimilate Aboriginal and First Nations children into the dominant European colonialist culture.

Across Canada, more than 150,000 children were removed from their families to be reeducated.

Violence and sexual abuse were common and the children were forced to convert to Christianity and not allowed to speak their native languages. Up to 6,000 are said to have died.

Kamloops was home to as many as 500 children, who Casimir said lived under horrible conditions, including hunger.

Casimir said Kamloops was one of the largest of such schools in Canada, operating between 1890 and 1978 under the auspices of the Catholic Church and later the government.

She added that it's believed the deaths are undocumented, although a local museum archivist is trying to see if any records of the deaths can be found.

More than five years ago, a Truth and Reconciliation Commission detailed harsh mistreatment inflicted on Indigenous children at the institutions.

The report contained details of at least 51 deaths at the Kamloops school alone between 1915 and 1963.

Kamloops was also described as extremely unhygienic and many children died of measles, tuberculosis or influenza.

The commission spent six years gathering evidence from some 7,000 former students of the residential schools.

Two years after the report was published, Canadian lawmakers called on Pope Francis to publicly apologize on behalf of the Catholic Church for its role in the abuse scandal. 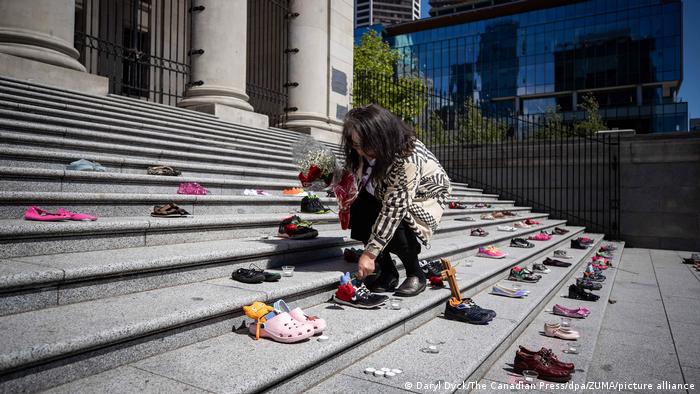 "This really resurfaces the issue of residential schools and the wounds from this legacy of genocide towards Indigenous people," Terry Teegee, Assembly of First Nations regional chief for British Colombia, said Friday.

British Columbia Premier John Horgan said he was "horrified and heartbroken" to learn of the discovery, calling it a tragedy of "unimaginable proportions" that highlights the violence and consequences of the residential school system.

The First Nations Health Authority called the discovery of the children's remains "extremely painful" and said in a post online that it "will have a significant impact on the Tk'emlups community and in the communities served by this residential school."

The authority's CEO, Richard Jock, said the discovery "illustrates the damaging and lasting impacts that the residential school system continues to have on First Nations people, their families and communities."

Lawmakers in Canada called on Pope Francis to publicly apologize on behalf of the Catholic Church for its role in boarding schools that abused aboriginal children. The pontiff has said he can't "personally respond."