The buildings burned to the ground days after the discovery of hundreds of unmarked graves at former Indigenous residential schools run by the Catholic Church. 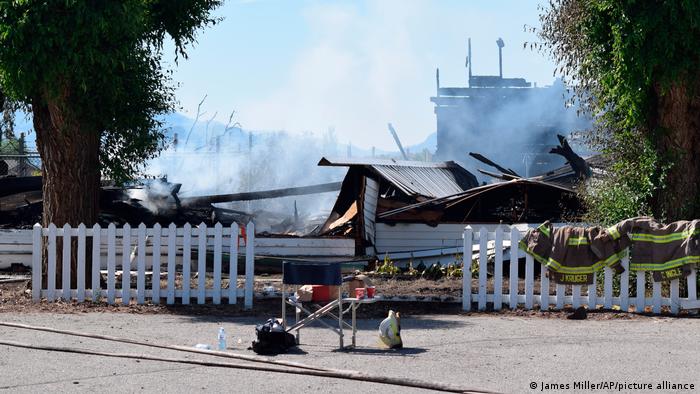 Two similar fires in British Columbia were reported less than a week ago, following the grim discoveries of hundreds of unmarked graves at former Catholic-run Indigenous residential schools.

What we know about the fires

Responders reported that the St. Ann's Catholic Church on the Upper Similkameen Indian Band was set on fire.

The two churches were burned to the ground, according to the Royal Canadian Mounted Police (RCMP), Canada's national police force.

Authorities consider the two fires "suspicious, and are looking to determine any possible connection to the church fires in both Penticton and Oliver on June 21, 2021," RCMP Sergeant Jason Bayda said in a statement.

The Penticton and Oliver fires — about 50 kilometers (30 miles) away — are still under investigation, according to the AFP news agency.

RCMP had issued a statement after last week's fire, stressing that investigators "won't speculate on a motive" despite the sensitivity to recent events.

What are the Indigenous mass grave discoveries?

Prime Minister Justin Trudeau has apologized for Canada's policy of Indigenous assimilation that applied at 139 of these schools across the country until the 1990s.

In such schools, children were separated from their families and taught to follow the traditions of the European colonizers, including adopting Christianity. Violence and sexual abuse were widespread.

In 2008, the Canadian government formally apologized for the inhumane conditions.

The remains of the children, some as young as 3, were found buried on the site of what was once Canada's largest Indigenous residential school.