Can India and Malaysia afford a prolonged trade spat? | Asia| An in-depth look at news from across the continent | DW | 20.01.2020

Can India and Malaysia afford a prolonged trade spat? 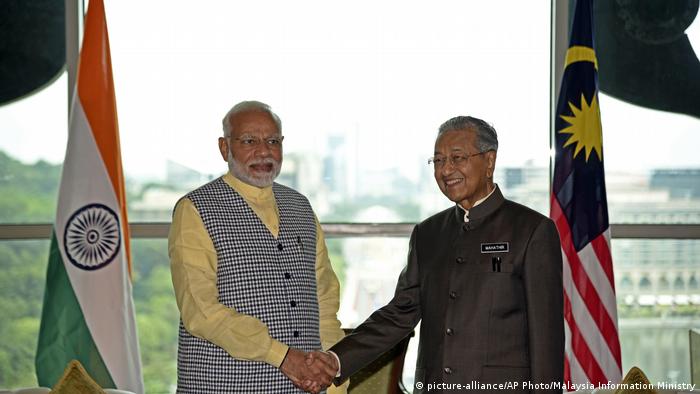 When Mahathir Mohamad came to power in Malaysia in May 2018, Indian Prime Minister Narendra Modi was one of the first foreign leaders to congratulate him. A spokesperson for India's Ministry of External Affairs said at the time that Malaysia was "a priority country in our Look East policy."

Despite this friendly start, ties between the two countries have deteriorated in the past few months. Mahathir has increasingly adopted an anti-Modi stance. Most recently, the Malaysian prime minister lashed out at the Modi government over New Delhi's new citizenship law that critics say discriminates against Muslims. Previously, Mahathir had criticized Modi's decision to scrap the special status for Indian-controlled Kashmir. In Mahathir's words, India had "invaded" and "occupied" Kashmir.

Although New Delhi objected to Malaysia's criticism by issuing formal statements, Modi's government has also decided to wage a "trade war" with the Southeast Asian country.

Malaysia is among the world's top producers of palm oil, with India being one of its biggest importers. According to some estimates, between January and October last year, India imported more than 4.4 million metric tons of palm oil from Malaysia.

Last week, India's Union Commerce Ministry issued a notification to move the import of palm oil from the "free" to "restricted" category. Analysts dub it a clever move as it avoids allegations of a "formal ban" on the Malaysian palm oil. At the same time, it gives out a message to Mahathir that the Indian government is not happy with the criticism over Kashmir and the Citizenship Amendment Act (CAA).

According to Reuters news agency, the Indian government has also informally asked traders to stop importing palm oil from Malaysia. The Modi administration, however, denies the report.

Sanjay Kapoor, an Indian journalist and foreign affairs expert, told DW that it is the first time in the country's history that a government has adopted a "vindictive foreign policy."

"I think India knows the strength of its [huge] market. But, I don't think it can emulate the US or other big global powers in teaching a lesson to its opponents," Kapoor underlined.

Malaysia's Ministry of International Trade and Industry (MITI) said Monday the Southeast Asian country's trade minister was open to meeting his Indian counterpart at the World Economic Forum in Davos this week to discuss the trade dispute.

"In the spirit of economic partnership between our two nations, Malaysia has made every effort to accommodate the official request by India, but due to the busy schedule of both ministers, a mutually agreeable time has not been reached at the time of this statement," MITI said.

"In the absence of a formal meeting, it is common for interested parties to meet informally and exchange views on the sidelines," it added.

It is unclear how New Delhi would respond to the Malaysian offer. 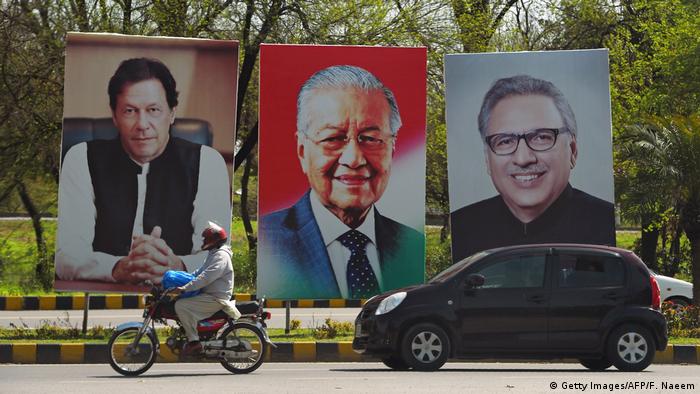 Sandeep Dixit, an Indian journalist, described the trade spat between India and Malaysia as "unusual" and "rare."

Experts also say that the banning of Malaysian palm oil could also have a negative impact on Indian economy. For example, how would the country fulfill the domestic demand for palm oil?

According to DW's Prita Kusumaputri, Indonesia would be more than willing to grab this opportunity and export more palm oil to India. "Last year, Malaysia overtook Indonesia as India's biggest palm oil supplier. Indonesia now has a chance to be the biggest palm oil exporter to India once again," she said.

More than just an economic dispute?

Shashank, India's former foreign secretary, told DW that the dispute between New Delhi and Kuala Lumpur is not only about palm oil, as India is also wary of an emerging alliance between Pakistan, Malaysia and Turkey.

"India has friendly ties with many Islamic countries, but these three countries are trying to establish an anti-India Islamic bloc," he said.

However, experts say that replacing a huge Indian market would not be easy for Malaysia. Therefore, some analysts in both countries are urging New Delhi and Kuala Lumpur to engage in a dialogue to resolve the conflict.

Teresa Kok, a Malaysian minister in charge of palm oil export, recently said that she had been in touch with the Indian high commissioner in Kuala Lumpur and the Malaysian ambassador in New Delhi to iron out differences.

It is "important for us to engage with them further through diplomatic channels and stakeholders," she told reporters. "We will continue to engage."