Indian state shuts down internet ahead of protests

Authorities in India's most-populous state have been bracing for protests after Friday prayers. At least 16 people have been killed in the state, most of them shot dead. 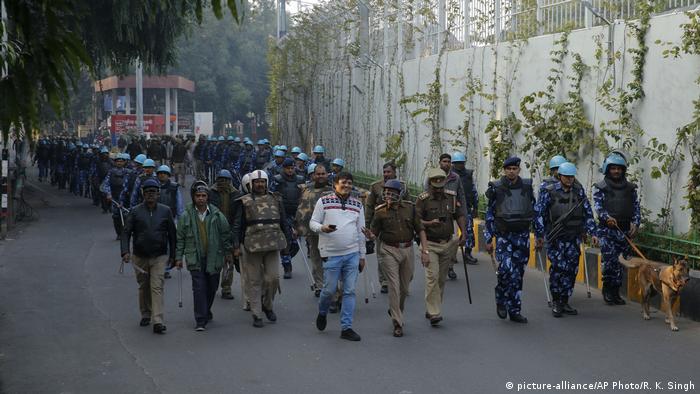 Authorities shut down mobile internet and text messaging services in Muslim-majority areas of the north Indian state of Uttar Pradesh on Friday, ahead of planned protests. About one third of the state was affected by internet blocks.

Thousands of paramilitary and police were deployed, while security drones flew overhead in expectation of further clashes. More people have died in the state than in all the others together during nationwide protests over a new citizenship law that excludes Muslim people.

More than 23 people have been killed in India since the law was passed in Parliament earlier this month. At least 16 of those were in Uttar Pradesh, which has a Muslim population of 20%, compared with 14% nationwide.

More than 1,000 people have been arrested in the state and more than 5,000 others have been taken into preventive custody, some of them as young as 16, according to media reports.

India's most-populous state is governed by the Bharatiya Janata Party — the party of Hindu nationalist Prime Minister Narendra Modi, who was reelected earlier this year.

The new law makes it easier for non-Muslims from three countries to become naturalized citizens. This law, along with plans for a citizens register, has stoked domestic and international fears about the marginalization of Muslims.

Modi has faced prolonged, nationwide protests over the laws, which he has said are humanitarian in nature and present no threat to Indian Muslims.

Demonstrations took place after Friday prayers in the cities of Delhi, Kolkata, Bengaluru and Mumbai, but there were no major reports of violence.

In Dehli, police reportedly beat a group of protesters and shoved them into buses as they attempted to demonstrate. About two dozen people had gathered near a state government building.

Nearby, security forces surrounded a rally at one of India's largest mosques.

A German student will leave India after receiving "oral directions" from immigration authorities. He had participated in protests against legislation to expand citizenship for non-Muslim immigrants in India. (24.12.2019)