There's little reason for African nations to be afraid of the US-China trade spat. On the contrary, African economies could gain in importance, should their new free trade agreement be filled with life. Investors and trade partners currently have their sights set on Africa. In mid-June, the United States staged an economic summit with the continent in Maputo, Mozambique, to support what was called the resilient and sustainable partnership between the US and Africa.

Only days later, China emphasized its good relations with African countries. Chinese Foreign Minister Wang Yi said joint projects had to be sustainable as he rejected criticism that his country would maneuver African nations into a debt trap by granting generous credit lines. Such accusations, Wang said, showed critics didn't understand "the true friendship between China and Africa."

"The two major players, the USA and China, and to a certain extent also Europe, are competing to strengthen their economic linkages within Africa," said UNCTAD economist Giovanni Valensisi. "They also want to boost their potential share on the African market, which is very dynamic, with a young population and reasonable growth rates."

In the US, Deputy Secretary of Commerce Karen Dunn Kelly doesn't hide the United States' ambitions, saying her country wants to reverse the trend of falling US exports to Africa, with shipments to the continent having decreased by 32% since their peak back in 2014.

Increased interest in Africa becomes evident as a large number of nations there finally paved the way for the African Continental Free Trade Area (AfCFTA). UNCTAD economist Giovanni Valensisi thinks the current climate of trade conflicts and protectionism shows Africans just how important their agreement is.

"One of the strategic objectives of the African Continental Free Trade Area is to put African countries in a better position to face precisely these kinds of situations," he said.

"If the intra-African market is increasingly integrated, African countries can better harness opportunities for economic diversification within the region, are in a better position to attract investments and have a much stronger bargaining power vis-a-vis much bigger global players."

Africa's policy is not without certain risks, though. The trade spat between Washington and Beijing is putting a damper on China's economic growth. The less China's economy expands, the less its hunger for raw materials — and it gets lots of these from Africa, including oil, iron ore or other metals.

But for the time being, that impact isn't really huge, says Klaus-Jürgen Gern from the Kiel Institute for the World Economy (IfW). 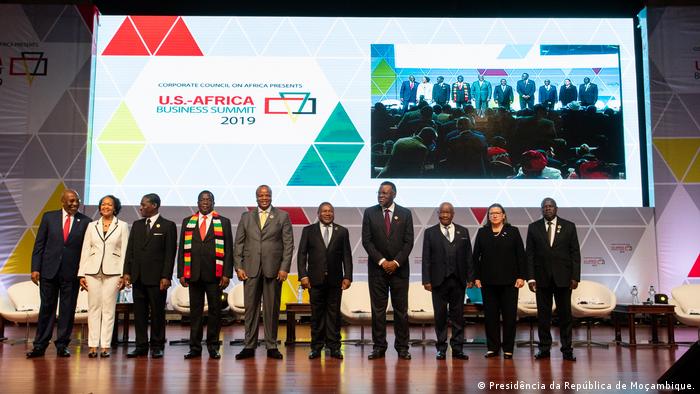 "Judging by the current commodity prices, there can't be any talk of a crisis right now," he said. "Prices have come down a bit from their peak in early 2018, but they are way above 2016 levels when demand for commodities took a dive."

Gern believes the risk of African nations having to decide whether to side with either the US or China in their trade activities is also quite low. At least he sees no indication that China is trying to make them take sides. And given that China has already invested so much in Africa, it would make little sense for the US to pursue such a policy either, Gern reasons.

Be that as it may, Africans are well-advised to focus on implanting their free trade zone. There's much work ahead, but also many opportunities. Right now, inner-African trade pales beside the trade volumes recorded within Europe and Asia.

Even in an interim period of AfCFTA, inner-African trade could increase by 33%, a fresh UNCTAD report suggests.

"What I've seen so far following the negotiations for several years, is a degree of political will and momentum that is unprecedented."

It's obvious that infrastructure has to be improved across Africa to make the zone work. "The continent's economic centers have to be better connected to facilitate trade," said IfW's Gerner. "The Chinese can lend a helping hand, but the problems won't go away overnight."

Additionally, the UNCTAD report warns that "trade does not automatically lead to more inclusive and sustainable development, nor does it automatically translate into higher levels of employment."

In order to create more jobs, African nations would have to expand their value chains in the production process, citing the cocoa-producing sector where things are not how they should be.

"Cocoa-producing countries in West Africa export most produce in its raw, unprocessed form, to outside the continent, yet the most important continental chocolate manufacturers, in Egypt and South Africa, rely mainly on cocoa paste and cocoa butter imported from outside Africa," the report pointed out. "The Continental Free Trade Area can help address such continental disconnects, which also arise with regard to other primary commodities."

Is Africa benefiting from the US-China trade row?