Sinti and Roma have fought for a Holocaust memorial in Germany for decades, not only because they were victims of genocide, but also because they still face discrimination today. Their wish has finally been granted. 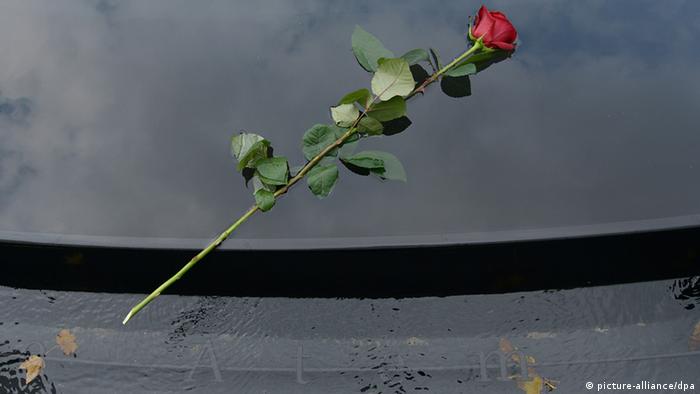 "When they unveil the memorial now, the tragic thing is that many of the survivors will not be able to see it," said Silvio Peritore, member of the Central Council of Roma and Sinti in Germany.

One of these, said Peritore, was 85-year-old Franz Rosenbach, a former forced laborer and Auschwitz survivor who spoke of his experiences in schools and campaigned for the memorial. He died just days before the memorial was opened.

The German state has taken a long time to acknowledge the Nazi genocide against Sinti and Roma - for many, far too long.

A Heidelberg exhibition has systemically covered the genocide of Sinti and Roma since 1997. Peritore joined the team a year later to work in the documentation and culture center. "In many memorials, the murder of Sinti and Roma was just a historical footnote to the Jewish Holocaust, partly because the study of this issue was neglected, either unconsciously or consciously," he said.

The issue is not simply adding up victims - six million murdered Jews versus 500,000 Sinti and Roma. "What does a memorial express? It is an acknowledgement of the victims. It is showing responsibility for the history that resulted from the Holocaust," said Peritore. 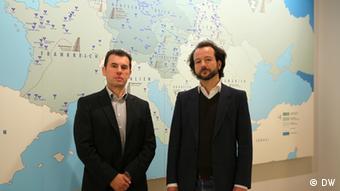 Peritore and Ulm have waited many years for the memorial

But the Sinti and Roma are clearly still an unloved minority, which has meant they have long been denied their recognition as victims of genocide. That, at any rate, is what people like Rosenbach felt. "They ask themselves, why don't they want that?" said Peritore. By "they," he means that belong to mainstream German society.

The Heidelberg exhibition receives around 15,000 visitors a year - mainly school classes and students, but also a few police cadets, who may have to deal with so-called criminal "gypsies" later. Armin Ulm is a researcher at the documentation center. He explains that the cliches about Roma and Sinti go back centuries.

"It's a phenomenon that has existed since the Sinti and Roma migrated to Europe in the 14th and 15th centuries. Although they were granted positive characteristics too, shown by romantic clichés like the figure of Carmen [the passionate 'gypsy' in the George Bizet opera], but there were also negative images, the stealing gypsy, the palm-reading gypsy. "

These ideas have lasted. The term "gypsy" first appeared in medieval chronicles. "The word appears in the chronicle of the town of Hildesheim, for example," Ulm said. The word appears in several documents in different forms, although often it is unclear who is actually meant, since the Sinti and Roma have generally not used it to describe themselves. Most consider it derogatory. 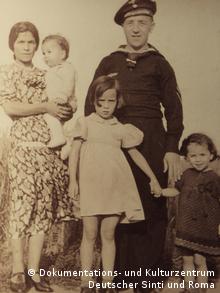 Minorities have a right to differentiation

"How could gypsy clichés have survived until today?" Peritore asks, and it is clear that does not mean the question rhetorically. There are 12 million Roma and Sinti in Europe, and in many countries, including those in the European Union, they are still marginalized.

"In countries like Hungary, Romania, the Czech Republic, and Slovakia, Roma and Sinti are denied basic human rights," Peritore said. "They don't have equal access to the core areas of life - occupation, health care, a decent home." He added that Sinti and Roma are discredited, criminalized, and scapegoated in many central and southern European countries. Peritore also claimed that EU funds meant to help the community often disappear into dark channels, rather than invested in infrastructure projects that would improve the lives of Sinti and Roma.

His criticisms do not spare western Europe. "Here in Germany, when we hear about a 'Roma problem,' then we're talking about people searching for a safe, dignified economic existence. That is a justified hope," he said. But here too they are seen as a security risk, he argued - as in 2010, when President Nicolas Sarkozy allegedly defied French and EU law and deported Sinti and Roma.

Peritore also accuses Germany of deporting some Roma and Sinti to Kosovo, even though they are threatened with persecution there, and had already established themselves in German society. He argues that where Roma and Sinti are offered the same opportunities, they follow the same paths as other members of society. "That contradicts the claims of those who have make sweeping assertions against Sinti and Roma," he said. "Those who say that all the programs and projects are useless, because they allegedly conflict with [Sinti and Roma] culture. That's how we expose that as lies, by showing that things work out if people get a fair chance." 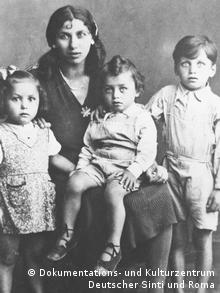 Elisabeth Emmler and her children were murdered in Auschwitz

The genocide exhibition includes many pictures of Sinti and Roma from before 1933. They show scenes of family life, some of them look almost bourgeois. They show people who had arrived at the middle class of society. But it did not save them from murder and persecution.

My grandparents and their four children survived," Peritore said. "They were taken to a ghetto in occupied Poland in May 1940, along with 2,500 other German Sinti and Roma." As a trained telegraph technician, his grandfather had to maintain communications equipment, which gave him contact with Polish partisans. That meant he could flee from the ghetto with his wife and children and disappear among Polish farmers. After the war, his family then returned home to the southern German town of Karlsruhe. The rest of his family were sent to a death camp in 1943 and murdered.

"Serious scholars have long since proved that there was a second Holocaust," said Peritore. "They were the completely identical racist motives, the identical criminal apparatus - the same murder methods in the same places, carried out systematically and efficiently." But the first German chancellor to acknowledge this was Helmut Schmidt, in 1982.

After it was decided that there would be no common remembrance for all the victims of the Holocaust, the German parliament voted to establish a memorial to the Roma and Sinti. But then there was a bitter row - the government, historians, and the representatives of the minority could not agree on details.

For the Central Council of Sinti and Roma, the issue is not just the belated acknowledgement of the past, but responsibility for the present and the future - to prevent further discrimination and marginalization. "If there's something to be learned, then maybe it's that. But maybe that's too much to ask," Peritore said, the sadness audible in his voice.

At a small dead-end street in a suburb of Cologne-Roggendorf, well kept houses line the streets. Popularly known as a "Gypsy settlement," the area is home to 18 Sinti families. (24.10.2012)