Jean-Claude Juncker's bid to become the European Commission's next president has been given a boost after two more EU countries said they would support his candidacy. This leaves the UK looking increasingly isolated. 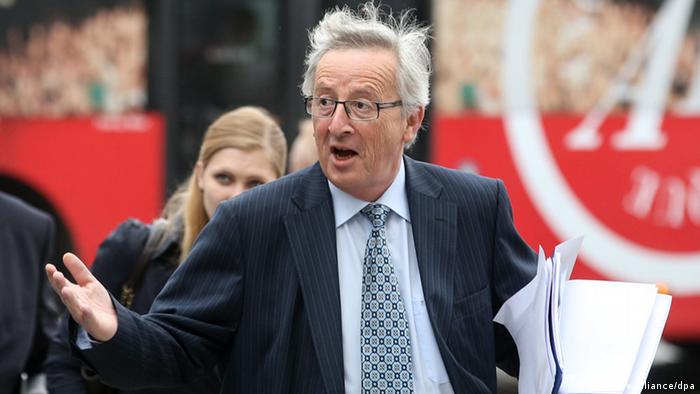 Just hours before the leaders of the European Union's 28 member states are to gather in the Belgian town of Ypres to discuss who should replace outgoing European Commission President Jose Manuel Barroso, both the Netherlands and Sweden announced that they would support the former Luxembourg premier's candidacy.

"If it comes to a vote on Mr. Juncker, the Netherlands will not block him but support him," Dutch Prime Minister Mark Rutte told the country's parliament. However, he also cautioned that a decision on the issue may not be possible at the European summit, which was to begin later on Thursday and run through Friday.

Earlier, Sweden, which had previously appeared reluctant to support the conservative candidate for the job, also indicated it could back him for the job.

"If Jean-Claude Juncker attracts a qualified majority of heads of state and government and also has the support of the European Parliament, then the Lisbon Treaty rules have been followed and the government recommends that Sweden joins this majority," Swedish Prime Minister Fredrik Reinfeldt told a parliamentary committee.

At the same time, German Chancellor Angela Merkel, who has declared her support for Juncker, appeared prepared to grant Italy more flexibility in paying down its public debt.

"The German government agrees that the (eurozone's) Stability and Growth Pact offers excellent conditions for (promoting growth and competitiveness), with clear guard rails and limits on the one hand and a lot of instruments allowing flexibility on the other," Merkel told the Bundestag lower house of parliament on Wednesday.

"We must use both just as they have been used in the past," he added. Observers said this apparent gesture to Italy and other financially troubled EU countries, meant Prime Minister Matteo Renzi could now also be expected to back Juncker for the Commission job.

The process of naming the next head of the European Commission is a complicated one, with both the European Parliament and the 28 heads of state or government having a say. Juncker was seen as the frontrunner after last month's European election, as his conservative bloc won more seats than the Social Democrats, who had put Germany's Martin Schulz forward as their lead candidate.

However, opposition to Juncker's candidacy quickly emerged among the 28 leaders, with conservative British Prime Minister David Cameron spearheading a drive to prevent him from getting the job.

Cameron has said he regards Juncker as an old school European federalist who is incapable of breathing new life into the bloc. The UK premier has threatened to demand a vote on Juncker's candidacy if he and the other EU leaders are unable to reach a consensus.

Leading Social Democrats have agreed to back conservative candidate Jean-Claude Juncker as the next president of the European Commission. It comes just days before EU leaders are to meet to try to decide the issue. (21.06.2014)

A German press report says British PM David Cameron has warned that his country could leave the EU if Jean-Claude Juncker wins the bloc's top job. Juncker remains optimistic about his chances. (01.06.2014)