Cambodia is home to some of the world’s most intensive freshwater fisheries. The 2.6 million tonnes of fish caught annually in the Mekong basin represent seven times more than the catch of North American inland fisheries and more than 10 times the entire fish catch in Australia. As Cambodia’s population grows, however, the fishing industry is coming increasingly under threat. 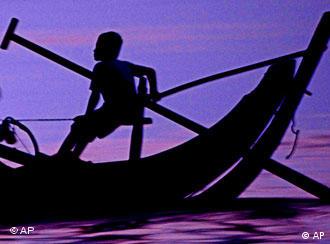 Fishermen on the Mekong River

Fish production in Cambodia is three times as big as the country’s pig production and 20 times bigger than its chicken production. Most Cambodians rely on fish as a source of affordable protein.

Cambodia has the world’s highest annual per person fish catch -- 20 kilos. Whereas in China the figure is one kilo per person and in India it is 1.5 kilos.

In the last 60 years, Cambodia’s fish production has doubled whereas its population has tripled. Pressure on the country’s fish resources has increased significantly -- Cambodia is close to reaching its maximum level of fish production.

Another phenomenon is also contributing to the depletion of fish stocks in Cambodian waters -- selected overfishing.

Peter Degen from the United Nations Food and Agriculture Organisation explained that fish species which “get to sexual maturity in more than a year, i.e. in two or three years” were fished out of the “water before being able to reproduce.”

Some experts have also blamed illegal fishing in the closed season for the growing problems but Dr Eric Baran, a fish biologist at the World Fish Centre, who has been working in the region for more than 10 years, thought human intervention was more to blame.

Baran said that his impression was that the negative impact of fishing was “overemphasized”. There was “much more risk in terms of dambuilding or agricultural changes,” he said.

Growing industrialization in Cambodia has led to many dam-building projects for generating electricity. The dams have a devastating impact on fish resources because they interrupt the migration routes of the fish.

The conversion of floodplains into agricultural land and the use of pesticides in agriculture have also had extremely negative effects on the fishing industry.

The region’s biodiversity is increasingly endangered by this human intervention.

Consequently there are less big fish in Cambodian waters and this is affecting the country’s economy.

No alternatives for the poor

Once again, it seems to be the poor who are most hit by the problems that the fishing industry is suffering.

So they have to rely on nature and its resources, which more and more are at the mercy of today’s fast-paced global modernization process.