Cambodian officials have discovered an illegal shipment of ivory inside an abandoned shipping container, partially hidden in hollowed-out logs. The Asian state is considered a key transit point for the smugglers. 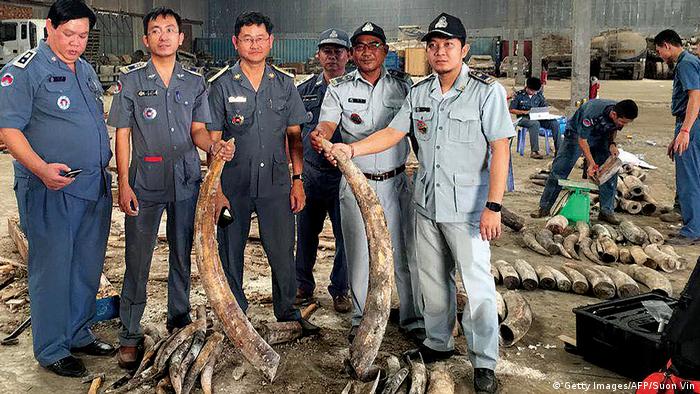 Authorities discovered almost 280 pieces of ivory, including full and partial elephant tusks in Cambodia's key port of Sihanoukville, an official said on Wednesday.

The abandoned container held around 941 kilograms (2,075 pounds) of ivory; it's owned by a company in Mozambique. Officials said it was transported to Cambodia's southern port from the Ivory Coast around a year ago.

"When the containers arrived at the port we found strange objects in the scanners," said Lim Bun Heng, deputy prosecutor for Preah Sihanouk province.

"We requested the company owner to open the containers but no one showed up," prompting the authorities to eventually investigate the shipment themselves, he added. The officials discovered the haul of illegally smuggled ivory hidden inside wooden logs.

While the haul is still being investigated by the authorities, it seems likely that the shipment was linked with another massive seizure of ivory in December 2016, which the Cambodian authorities made outside the capital Phnom Penh. At the time, the officials reported finding 1.3 tonnes of ivory, 137 kilograms of pangolin scales and seven tiger skulls, also hidden in logs. According to Cambodian media, both of the illegal shipments originated from Mozambique and were tied to the company named Cam Transit Import.

Large hauls of smuggled wildlife goods are not uncommon in Cambodia. In recent years, the Asian state has made a reputation for being a hub of illegal wildlife trade, most of it driven by demand from China and Vietnam. Rich buyers in Asia pay handsomely for ivory, but even more so for pangolin scales and rhino horns, which are used as ingredients in traditional medicine.

China has pledged to phase out ivory sales by the end of the year.