Cambodia: Opposition leader Kem Sokha goes on trial | Asia| An in-depth look at news from across the continent | DW | 15.01.2020 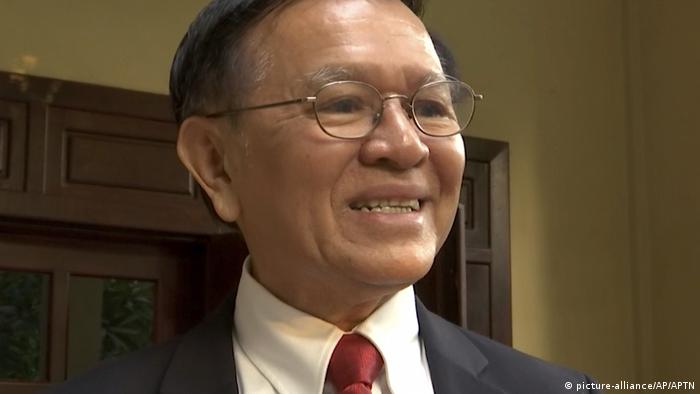 The Municipal Court in Phnom Penh, Cambodia, opened the trial against former opposition leader Kem Sokha on Wednesday. Sokha, the co-founder and former president of the Cambodian National Rescue Party (CNRP), is accused of committing treason. If found guilty, he could be sent to prison for up to 30 years.

The first day of the trial — which could last up to three months — attracted dozens of people to the court in Cambodia's capital. Among them were diplomats, human rights activists, politicians and supporters of the CNRP. They were closely observed by a strong police force.

"I came here to show my support to Kem Sokha because there was no good reason to put him on trial," CNRP supporter Prum Bun Ly told DW in front of the court.

Just like many of his fellow countrymen, the 68-year old Cambodian believes that Sokha didn't commit any crime. "He's a good person who tried to bring democracy to Cambodia."

Kem Sokha, 66, was arrested in September 2017 on accusations of plotting to overthrow the government. About two months after his arrest, the Supreme Court of Cambodia dissolved the CNRP and banned 118 of the party's officials from political activities.

The CNRP, which Sokha co-founded with popular opposition leader Sam Rainsy, was widely seen as the main challenger to Prime Minister Hun Sen's ruling Cambodian People's Party (CPP). With the CNRP gone, the CPP claimed every seat in parliament in the 2018 elections.

The case against Sokha, as well as the dissolving of the CNRP, was widely criticized in and outside Cambodia. Many political observers believe that the move was politically motivated and had little to do with justice. Sokha spent a year in prison and another under house arrest. Just over two months ago the house arrest was lifted, likely as a result of international pressure on the Cambodian government.

The first hours of the trial focused on a short video from 2013 in which Sokha says he received foreign assistance to realize his political ambitions. The video has been presented as the main evidence that the opposition leader plotted to overthrow the government.

In response, Sokha asked the judge to play the video in its entire length instead of the short, edited version.

In a statement on his Facebook page, Sokha said that he did not "conspire with foreign powers" or commit "acts that would be detrimental to the national interests."

"All of my activities were focused on human rights and democracy, carried out in peaceful and non-violent manners in accordance with the Constitution of the Kingdom of Cambodia."

Labor activist and opposition supporter Rong Chun said the trial is a political problem. "It's not a free and fair trial ... I think the court is trying to make it look good, but the court is following direct orders of the government."

Just days before the start of the trial, the court announced that only a small group of people would be allowed inside the courtroom, meaning that most observers — including most journalists — had to wait outside.

"The court has the excuse that the court room is too small and that there's limited space for people to sit. But they should have arranged something so that the people can see and hear what's happening inside the courtroom," said Am Sam Ath, deputy director of monitoring at the Cambodian human rights NGO Licadho. "At other courts people can watch the developments on a big screen. Why not here?"

The trial against Sokha starts at a time that Cambodia is under serious international pressure. The European Union is threatening to withdraw Cambodia from a preferential Everything But Arms trade agreement, a move that could have serious financial consequences for Cambodia's economy. The EU is considering the move because of the crackdown on democracy and human rights in Cambodia. In the past few years dozens of critics were arrested or forced into exile. The crackdown also lead to the shutdown of multiple media outlets and increasing pressure on NGOs.

While some praise the decision to finally start the trial against Sokha, many observers don't believe that it will lead to political changes in Cambodia. "It's a circus trial," prominent former CNRP member Sisowath Thomico said. "And this is not just the trial of Kem Sokha. It's the trial of the CNRP. If he is accused of treason, then all of us are."

Thomico said that the outcome of the trial won't have anything to do with justice. "It's going to be a political outcome. But it's important to show our support. Kem Sokha is the figurehead of democracy in Cambodia. He has accepted to bear all the consequences, to give hope to democracy. That's why we have to support him."