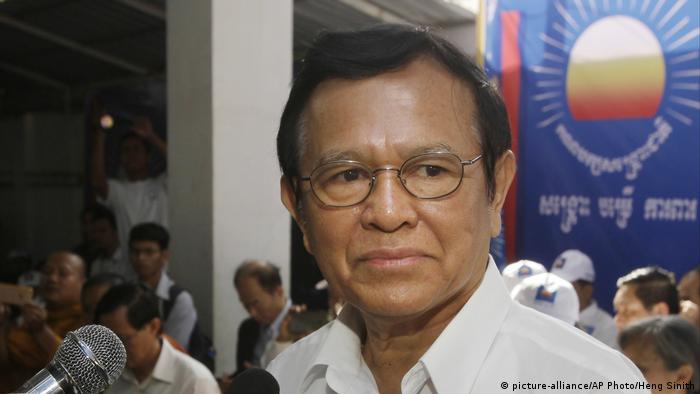 The co-leader of the Cambodian National Rescue Party (CNRP), Cambodia's main opposition party, spent one year in prison on charges of treason and was moved to house arrest in September 2018.

The release comes amid international pressure on Cambodia because of a widespread crackdown on political critics.

Citing health concerns, a Cambodian court announced on Sunday morning that Sokha is allowed to leave his house and to travel around Cambodia. However, the politician is still banned from being politically active and is not allowed to leave the country.

Speaking in front of Sokha's house in Phnom Penh, his lawyer Pheng Heng confirmed that the house arrest has been lifted. Heng said that he and his colleagues have recently asked the court to drop all accusations, but the controversial charges against Sokha are still standing. "Mr. Sokha is a politician, but he still has been banned from doing political activities. We now need to clarify if Sokha can talk with the public and with the press."

Read more: Are Cambodian political prisoners being released to placate the West?

Sokha, 66, served as president of the CNRP, which he co-founded with opposition leader Sam Rainsy. The CNRP is widely seen as the only party strong enough to challenge Prime Minister Hun Sen, the strongman who has ruled Cambodia since 1985. During national elections in 2013 and during commune elections in 2017 the CNRP won the votes of millions of Cambodians.

But the CNRP's march to potential victory ended with Sokha's arrest in September 2017, after being accused of plotting to overthrow the government. About two months after his arrest, Cambodia's Supreme Court dissolved the CNRP and banned 118 of the party's officials from political activities. With the main challenger gone, Hun Sen's Cambodian People's Party won all seats during last year's national elections.

The move against the opposition is widely seen as an attempt by Hun Sen, who has been accused of all kinds of human rights violations, to cling to power. Internationally, the Cambodian government has been heavily criticized for what is widely seen as a crackdown on democracy. The European Union is threatening to withdraw Cambodia from Everything But Arms (EBA), a trade program that allows Cambodia to export goods to EU-countries tariff-free. The EU is expected to inform Cambodia about a decision on the EBA in the coming days. Experts say that losing the trade benefits can severely damage Cambodia's economy.

Sokha's release from house arrest also comes just one day after his political partner, Sam Rainsy, arrived in Malaysia. Rainsy has challenged Hun Sen's rule since the 1990s and has lived in exile since late 2015. He planned to return to Cambodia on November 9, but his attempt was hindered after Hun Sen deployed heavily armed security forces at the border and asked airlines not to allow Rainsy on board.

"I look forward to more positive developments as we are all working to put the country on the right track," she told DW.

Monovithya also said that "it's time for all Cambodians to work together to protect the trade privileges we receive from the EU."

Opposition supporters felt some relief after hearing that the house arrest of their leader has been lifted. "I'm happy for him that he's now free to travel around Cambodia," CNRP supporter Kong Chai said. "But he's a politician and if he can't do political activities, it means he's not free yet."

"But it's really too little, too late for the EBA preliminary determination on November 12. Only in Hun Sen's repressive Cambodia would releasing someone from house arrest after holding them for two years on politically fabricated allegations be considered 'progress' of some sort," Robertson said in a statement.

In front of Sokha's house, American rock music could be heard. But the streets remained quiet after the announcement of the court. Lawyer Pheng Heng said that it's not clear yet when the opposition leader will appear in public for the first time in over a year. "He needs to be careful, even when he's not doing anything politically. But you'll see him when he comes out."

In a message to DW, Sokha's daughter Monovithya said that she's preparing for what her father will face once he is back in the field. "I think the political environment will not be the same as prior to the 2017 crisis. The democratic space now is nearly non-existent. Reopening that will not be easy."

Sor San, a disabled designer from Phnom Penh is introducing ethnic fashion from her country in Berlin this year. She is one of five female designers to showcase her work at a fashion event. (27.08.2019)

Cambodian opposition leader-in-exile, Sam Rainsy, is trying to mount a strong challenge to long-ruling Prime Minister Hun Sen in Cambodia's upcoming elections – from and with the help of Europe. Kris Janssens reports. (07.02.2018)