Calls grow for South Korea to consider deploying nuclear weapons | Asia | An in-depth look at news from across the continent | DW | 13.09.2016 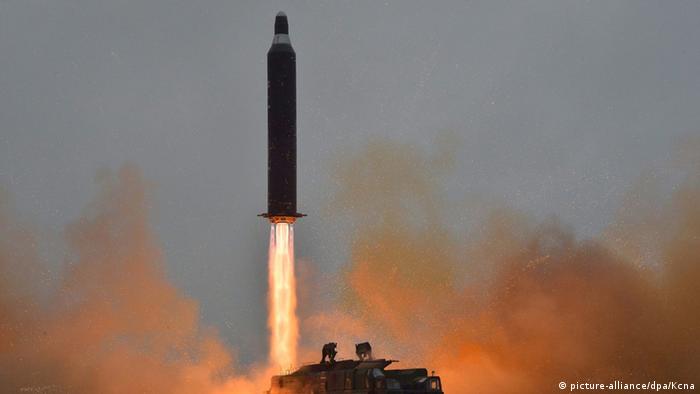 With North Korea carrying out its fifth underground nuclear test recently - and reports that the regime of Kim Jong Un is looking to conduct another similar detonation at its Punggye-ri test site - there are growing calls in Seoul for South Korea to develop a comparable nuclear deterrent.

Following an emergency meeting at the National Assembly in Seoul on Monday, September 12, a faction of the ruling Saenuri Party called on the government to consider developing and deploying nuclear weapons to deter Pyongyang from new and increasingly belligerent provocations.

"In order to protect peace, we also need to consider all measures to deter North Korea's provocations, including nuclear armament for the purpose of self-defense," Won Yoo-chul, a senior lawmaker for the party, was quoted by the Korea JoongAng Daily as saying.

'A nuclear crisis is developing'

"With North Korea's fifth nuclear test, its nuclear weapons have taken a stride toward posing an actual threat to the South Korean people," he stated, adding that a "nuclear crisis is developing" as Pyongyang has ignored international condemnation and United Nations sanctions to go ahead with both the development of an arsenal of nuclear warheads and the ballistic missiles to deliver them.

A group of 31 members of the Saenuri Party signed a statement calling for South Korea to take all possible measures - "including nuclear armament" - to protect the safety of the South Korean people.

And there are growing numbers of citizens who agree that historic attempts to communicate and negotiate with the North have come to naught and that Pyongyang has no real interest in reducing tensions on the peninsula.

"This is the fifth time they have carried out a nuclear test and all that successive South Korean governments have done is to show that they are unable to prevent the North developing nuclear weapons," said Kim Bum-soo, executive director of the conservative NGO Save North & Next Korea.

"And I do not think anything will be different this time," he told DW. "And every time the international community fails, it gives North Korea more time to develop nuclear weapons and missiles, the analyst added.

Return of US weapons?

"I believe it is time that the South Korean government gave serious consideration to developing its own nuclear weapons or to arrange with Washington for the strategic nuclear weapons that were removed from South Korea in the 1990s to be returned," Kim Bum-soo stressed. "To me, that would be the most meaningful strategy to stop North Korean aggression."

Repeated sanctions and warnings have been unable to deter North Korea from pursuing its nuclear weapons program. East Asia expert Rüdiger Frank tells DW that the international community has totally failed on this front. (09.09.2016)

B-1 bombers escorted by US and South Korean jets have flown over the Osan Air Base in a show of strength aimed at North Korea. Meanwhile, the North has deployed troops to flood-stricken areas on its border with China. (13.09.2016)

North Korea prepared for another nuclear test at any time, says Seoul

The Seoul government has developed a plan to obliterate the North Korean capital, according to a media report. South Korea said it would destroy all parts of the city should there be an impending nuclear threat. (11.09.2016)

Calls for Seoul to have an independent nuclear deterrent came just days after politicians suggested that South Korea needs to develop its own nuclear-powered submarines to counter the North's growing submarine-launched ballistic missile (SLBM) capability.

After its most recent SLBM test, on August 24, Pyongyang declared that it had perfected the launch system - a development that has caused concern in many nations that fear a North Korean submarine could evade detection and get close to a target before launching its weapons.

Park Geun-hye, the South Korean president, has so far remained silent on the issue since the most recent test. However, after the previous underground detonation in January, she told reporters that she was firmly against arming the South with nuclear weapons.

"We have made our promise to the international community," she said. "If we [develop our own nuclear weapons] we will break that promise.

"Nuclear weapons should not exist on the Korean peninsula," she noted.

Stephen Nagy, an associate professor of politics at Tokyo's International Christian University, believes that no matter the provocation, it will be difficult to convince the majority of people in South Korea of the need to deploy atomic weapons.

"I just don't think the proposal will be able to gain sufficient traction among the public because they understand the potential consequences of a nuclear war on the peninsula," he told DW.

"South Koreans have been very comfortable in outsourcing their national defense to the US," he said. "And it is also clear that neither Beijing nor Tokyo would be happy to see South Korea expanding its military capabilities by adopting nuclear weapons."

"Beijing, in particular, would be extremely concerned that Japan would follow suit and that would mean a full-blown arms race in the region," Nagy argued.

But the pace at which North Korea is carrying out nuclear and missile tests means Seoul has good reason to be concerned, the expert pointed out. "It is clear that they have made massive progress with their ballistic missiles and submarine-launched missiles, as well as with their nuclear program," he said. "So the strategy of trying to deny the North the ability to develop these weapons has proven to be ineffective, which is why they are looking for a new approach."

On the other end of the spectrum to those who advocate South Korea developing nuclear weapons are those who want Seoul to engage Pyongyang, to drop sanctions and hope that the regime there moderates its behavior.

Critics of this approach point out that the South's previous "sunshine policy" did precisely that but achieved nothing. "It's true that North Korea has perfected brinkmanship, and that they understand the relationship between a demonstration of their offensive capabilities and their ability to exploit that for concessions from the US, from China and other countries," Nagy said.