Leverkusen are the only German club to enter the second leg of the Last 16 with a positive result. Meanwhile, Arsenal went down on home soil to Monaco. 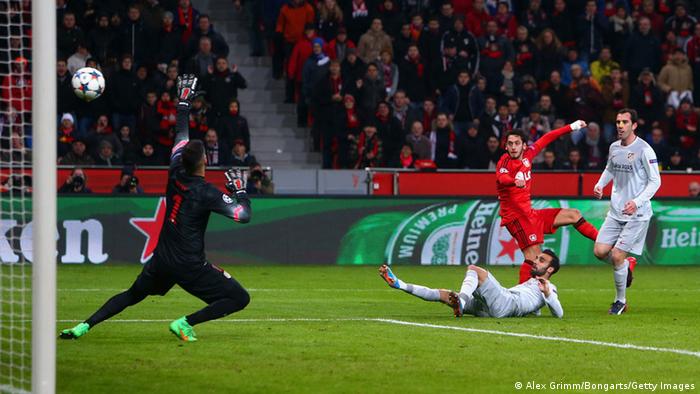 Hakan Calhanoglu's sweet strike in the 57th minute - his second goal in seven Champions League appearances - hands the Bundesliga club a slim, but important advantage to take to the Vicente Calderon stadium in March. The visitors were cut down to ten men when Tiago was shown his second caution of the game on 75 minutes.

Leverkusen were quick to maximize their pace on the counterattacks early in the game with Josip Drmic adding more mobility to the side as he replaced Stefan Kiessling for the second successive match.

On 14 minutes, Leverkusen were close to netting when Wendell hooked the ball from a corner kick towards goal, but Mario Mandzukic was shrewd in his positioning and cleared off the line. Roger Schmidt's team wasn't high-pressing as such, yet won plenty of challenges and seemed to be just one final pass away from goal.

The crowd of 30,000 was momentarily brought to life in the 26th minute when Emir Spahic stepped out of defense and smashed the crossbar with a 30-yard piledriver that left Miguel Angel Moya, the Atletico keeper, well beaten. Two minutes later, Lars Bender struck at goal from 20 yards but his shot was blocked by Tiago.

Class shines at both ends 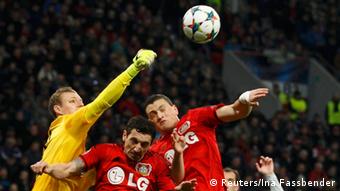 Leno made up for some mistakes in recent Bundesliga games

While Leverkusen dominated the majority of the half, Atletico Madrid's efficiency at the other end wasn't to be underestimated. The Mattress Makers - one of the nicknames of Atletico Madrid - were denied by Bernd Leno when both Arda Turan and Antoine Griezmann had a sight of goal.

But the half ended for the Germans with Leno producing an outstanding, one-hand save to deny defensive midfielder Tiago who swept the ball towards goal with an impressive scissor-kick.

Schmidt's men would need to wait 12 minutes after the interval to finally break the resolve of Atletico with a sumptuous attack from Karim Bellarabi followed up by a thunderous right-foot finish from the boot of Calhanoglu, who was watched from the stands by Turkish national team coach Fatih Terim.

Moments later, Bellarabi was integral in another high-quality transition to attack - the German winger's acceleration taking him past man-after-man before the attack petered out.

Given the narrow margin of Leverkusen's lead, the home fans had to brace themselves for some nervy moments in the last quarter of an hour. Fernando Torres had the ball in the net for the Spanish club, but the preceding corner kick had swerved out of play.

Written off before kick-off on Wednesday, Leverkusen now have the upper-hand heading to Madrid, which promises to be another fascinating battle between Schmidt and his opposing counterpart, Diego Simeone. 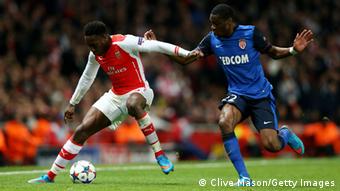 Mountain to climb in Monaco

Arsenal are in danger of exiting at the Last 16 stage of the Champions League for the fifth consecutive season, after Monaco pushed the Gunners to a 3-1 defeat at the Emirates.

Arsene Wenger will need to mastermind an away victory at the Stade Louis II where he coached for seven years to avoid a defeat that will leave him under serious criticism. The French club sit fourth in their domestic league and have shredded some of the well-paid stars that fled to the principality in recent seasons like James Rodriguez and Radamel Falcao.

Yet there was still the midfield mastery of Joao Moutinho, who was in excellent form for the visitors. In the 37th minute, Monaco stunned the North London crowd when Geoffrey Kondogbia lashed the ball home from 30 yards with the help of a wild deflection off captain Per Mertesacker that left David Ospina stranded.

Monaco struck the killer blow for the first leg in the 53rd minute with former Tottenham and Leverkusen striker Dimitar Berbatov returning to England to strike home from close range.

The last time Monaco progressed past the Round of 16, they reached the final in the 2003-04 season, losing to Jose Mourinho's Porto.