Is the Internet in need of more light-hearted listicles and cat videos? BuzzFeed thinks Germany is. The viral content site is celebrating the launch of its new German-language website this week. 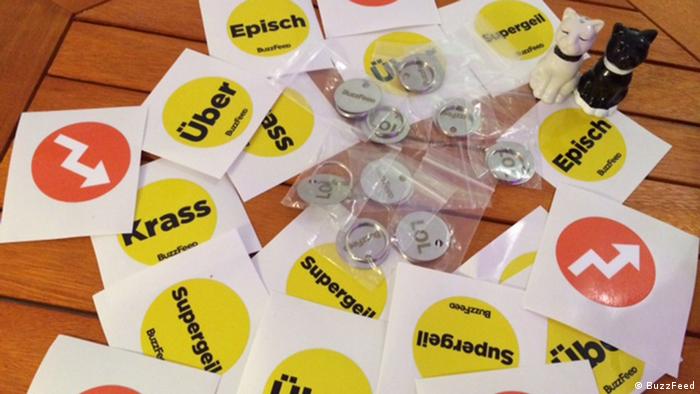 BuzzFeed's trademark colors and pop stylings on display in Berlin

In a nod to the website's click-generating felines, BuzzFeed has gone live in Germany by hosting their launch in - where else - a cat café located in Berlin. Editor-in-chief of BuzzFeed Germany, Juliane Leopold, explained the company's new plans there on Thursday.

Consider the site a social experiment, much like everything BuzzFeed does. For the first eight months, readers will be exposed to what made the hub of social content the giant it is today: cat content and quirky quizzes.

After the initial stage, where Leopold hopes to grow the page's social media following beyond one million users, the content will shift to news and lifestyle journalism, bringing it more in line with its English-language counterpart, which now even includes its own investigative journalism division. 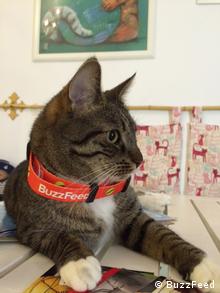 One of the attendees at BuzzFeed's Berlin launch

As experiments go, this one may - at first glance - seem slow out of the gate. There are articles posted in English, and some of the homepage extensions including, ironically, "Fail Feed" currently lack content. When asked about these disconnects, Scott Lamb, BuzzFeed's vice president of its international division explained, "We already have a sizable Germany-based readership on the English-language site, so we want them to feel like they're getting BuzzFeed plus original content on the German side."

Lamb adds that, as the German audience grows, they will likely repost some of the English articles which cover German culture.

Germany is the fourth language BuzzFeed has launched, aside from English, with French, Portuguese and Spanish coming before. It is also the second foreign site to launch in as many months following India's rollout in late August. According to Lamb, the rollouts will continue with Mexico and Japan slated next to receive their own content pages.

When BuzzFeed decided to expand, staff created a list of globally recognized cities, including Paris, London and Berlin. Their strategy in the foreign offices mirrors that of the original BuzzFeed: social experiments, humorous content and word of mouth sharing are used to try and establish a local audience.

A key question in Germany and elsewhere will be whether the site can credibly bridge the gap between offering serious news pieces and the initial content it offers, which tends to be highly accessible and pack a quick emotional punch.

Twitter campaigns do not solve Africa’s problems, thinks DW’s Ludger Schadomsky. On the contrary, the undermine democracy and self-determination and in the worst cases, result in US military interventions. (14.10.2014)

The Instagram account that included photos of rich young Iranians in bikinis or drinking alcohol strictly violated the country's religious laws. It was reactivated on Sunday (12.10.2014) after being taken down. (13.10.2014)

Microsoft's chief executive officer has unleashed a torrent of criticism on social media over his comments that women in tech should not ask for pay raises. But he quickly apologized, saying he was "completely wrong." (10.10.2014)