Germany's lower house has met to debate its classification of the 1915 slaughter of Armenians by Ottoman Turks. An official draft is believed to refer to "genocide" indirectly, with opposition parties calling for more. 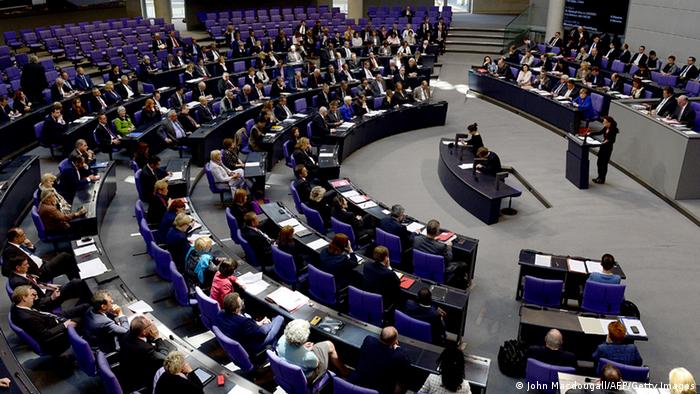 Bundestag President Norbert Lammert opened the debate to mark the centenary of the killings by himself directly referring to the mass killings as genocide.

"What happened before the eyes of the world in the Ottoman Empire during the First World War was a genocide," said Lammert.

The Bundestag president called on the present Turkish government to accept responsibility for what had resulted from the genocide, while stressing that it was not directly responsible.

Lammert also referred to the role of Germany - a World War One ally of the Ottoman Empire - whose troops were said to have been involved in planning and even implementing deportations.

A draft statement on the killings, agreed by both Chancellor Angela Merkel's Christian Democrats (CDU) and the Social Democrats (SPD), was expected to equate them to other genocides of the 20th century.

"The fate of the Armenians serves as an example of the history of mass extermination, ethnic cleansings, expulsions and ultimately the genocides that so dreadfully characterized the 20th century" said a leaked draft copy of the resolution. The draft goes out of its way to note that the Holocaust was even worse, calling it a "singularity for which Germany bears the blame."

Merkel's spokesman, Steffen Seibert, has said Merkel agrees with legislators using those terms. The wording of the statement, although somewhat softened, is expected to infuriate Ankara.

However, Germany's two parliament opposition parties - the Greens and the Left Party - said the wording did not go far enough.

'Shameful game of hide and seek'

Left Party delegate Ulla Jelpke accused the government of being too wary of Turkey's reponse, saying it was time to talk "plain language" to Turkish President Recep Tayyip Erdogan. "This game of hide and seek behind linguistic subtleties is shameful," said Jelpke.

"We owe to the victims that nothing is omitted and to call things as they are," he said, adding that it was also in Turkey's interests to reappraise events. "Those who address the blemishes of history do not diminish themselves, but grow as a result," said Özdemir.

An ecumenical ceremony in Berlin on Thursday evening, ahead of the official centenary commemoration of the killings, German President Joachim Gauck used a similar formulation as was being proposed in the Bundestag.

Gauck had referred to the massacres as genocide while addressing Germany's part in the events. "In this case, we Germans collectively still have to come to terms with the past, namely when it comes to shared responsibility and perhaps even complicity in the genocide of the Armenians," Gauck said. In the highly anticipated speech, Gauck also spoke of a "genocidal dynamic to which the Armenian people fell victim," and of "systematic acts of murder."

"In this case, we Germans collectively still have to come to terms with the past, namely when it comes to shared responsibility and perhaps even complicity in the genocide of the Armenians," Gauck said. In the highly anticipated speech, Gauck also spoke of a "genocidal dynamic to which the Armenian people fell victim," and of "systematic acts of murder."

In the run-up to discussions in the German parliament, the leader of the Central Council of Jews in Germany declared the killings to have been genocide.

"What happened a hundred years ago in the Ottoman Empire, the deportation and murder of more than a million Armenians, was a genocide," the council's president, Josef Schuster, tolf the Passauer Neue Presse.

Armenians have said their ancestors were killed in a concerted campaign of genocide that was ordered by the Ottoman leadership that ruled Turkey at the time, in an effort to drive the ethnic group of eastern Turkey. The issue still divides the Turkish and Armenian governments.

Turkey claims the 1.5 million figure is inflated and that those who died were killed as a result of war and unrest rather than a policy of genocide. It has also contended that hundreds of thousands were killed on both sides.

Genocide was defined by the UN in 1948 as "acts committed with intent to destroy, in whole or part, a national, ethnical, racial or religious group."

More than 20 countries - France and Russia among them - have so far recognized the Armenian killings as genocide.

Turkish Foreign Minister Mevlut Cavusoglu and his Armenian counterpart Ararat Mirzoyan met for the first official sit-down talks since 2009. Ankara and Yerevan have troubled history and no diplomatic relations.