Wolfsburg look set to stay in the Bundesliga after an impressive first half display set up a 3-1 win over Holstein Kiel. But the second division side showed enough to suggest the second leg could be a different story. 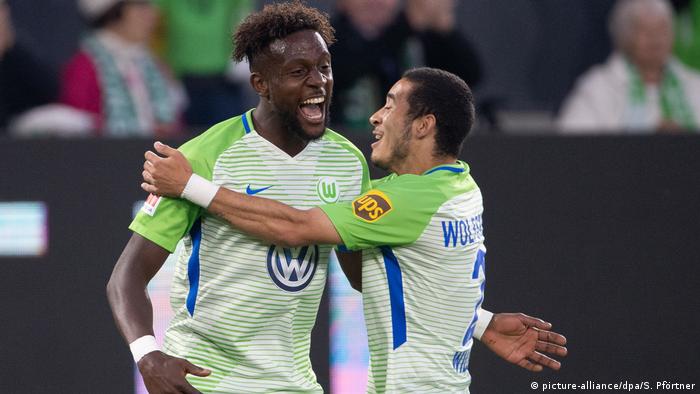 A ferocious start and a scintillating display from Yunus Malli helped Wolfsburg take control of the Bundesliga’s relegation playoff, despite a series of late scares against underdogs Holstein Kiel.

The top flight side, in the post-season battle for a second successive year, didn’t waste any time in asserting their authority, with Malli pulling the strings. The elusive Turkish playmaker tormented Kiel from the off and it was his slaloming run that created the first goal.

After Malli drove in to the box, his low cross was helped on its way before Divock Origi bundled home at the back post. It was the on-loan Belgian striker’s second in two games after a drought that had previously stretched back to the start of February.

The visitors looked overawed by the occasion and struggled to find any kind of foothold in the game, which made their equalizer all the more surprising.

Again the goal owed plenty to a brilliant run, this time from Dominick Drexler, who somehow managed to keep the ball in play while beating two Wolfsburg men within inches of the byline. He then picked out Kingsley Schindler, who stroked home from eight yards.

Despite their travails in the Bundesliga this season, the Wolves looked confident and soon restored their lead. A long ball was met by a Kiel head, but dropped to Josip Brekalo, who hammered a rising drive from just inside the box. Although brilliantly struck, it was close to Kenneth Kronholm, but the Kiel keeper could only push it up in to the net.

The second half started in similar fashion to the first and it wasn’t long before Malli got the goal his display so richly deserved. Kiel lost their defensive line as Origi held up the ball and were carved open when he found Malli in space with a smart reverse pass. Wolfsburg’s number 10 rounded the hapless Kronholm and tapped in to the empty net.

William and Arnold then went close for Wolfsburg as they looked to settle the tie in the first leg, but Kiel capitalized on a slight lull from their hosts to force a string of chances of their own.

The best of the lot fell to the man the visitors would have picked but the 2. Bundesliga’s top scorer Marvin Ducksch could only poke high and wide after a surging Kiel counterattack. As the clock ticked down, Kiel threw more men forward and felt they should have had a penalty two minutes from time — but Max Arnold’s aerial challenge on Rafael Czichos was deemed a fair one, even though he got nothing on the ball.

The second goal that Kiel deserved for a spirited final 20 minutes never came, but they retain hope going in to Monday night’s second leg.

FULL TIME - A brilliant last 25 minutes from Kiel comes to nothing as the referee blows his whistle. Wolfsburg, who were excellent in the first half and wobbly in the second, will take a two goal lead to Kiel, who at least have an away goal to give them hope. Our match report will be here any minute.

90+3 - Drexler away down the left and pulls it back. It pinballs around the box but Wolfsburg finally clear.

90 +1 -Dimata, just on for Origi, drives 40 yards down the pitch and then falls over. There's four minutes of injury time.

88' - More corners and a penalty claim for Kiel but nothing doing. Max Arnold didn't get any of the ball in an aerial challenge but it certainly wasn't a clean cut one. The visitors have deserved a goal in this last 20 minutes.

85- Malli, almost certainly man of the match - is removed in favor of Camacho. Labaddia knows Wolfsburg are rocking here.

84' - Oh Kiel. This time Seydel, who has made a difference since his introduction, finds space in the area but skews wide. Kiel are all over Wolfsburg now.

82' - Massive miss. Kiel break and suddenly have a four-on-three. They find leading man Ducksch but he pokes it high and wide when clean through.

81' - Wolfsburg make a change. Steffen comes off,, Błaszczykowski on.

78'- Kiel - enjoying their best period of the match now - win a corner. Schmidt climbs but can only head in to the back of his marker. After the next corner, Duksch wriggles free and his cross almost finds Seydel, but he can't quite reach it.

74' - Duksch - who has had a quiet night - stands one up to Seydel at the back post but his header flashes past the post.

72' - Chance for Kiel now as Mühling strikes inches wide from the edge of the box. Signs of life.

70' - Malli, which must be easily the most typed word on this blog tonight, slides one in to Arnold who hits a speculative effort straight at Kronholm, who spills it - naturally.

68' - Lovely stuff from Brekalo down the right, who glides past three men. The gulf in class has been all too evident tonight.

65' -William is slipped through down the right but Kronholm is out quickly to deny him space and make the save.

62' - Kiel make the first change of the match. Seydel on for Lewerenz.

59' - Kiel have a corner after a rare charge forward. It skims low across the box and briefly worries the Wolves before they manage to sneak a goal kick.

56' - GOAL! Malli gets the third. Origi found him with a lovely reverse ball as Kiel's offside trap failed and the Turkish playmaker rounded the keeper, who went down very early, and tucked in.

53' - Kenneth Kronholm, who has had a bit of a nightmare tonight - just kicks a goal kick out of play under no pressure. That's the last thing Kiel need.

49' - Kiel work it nicely down the right and it's pulled back to Drexler. He has to strike it first time though, and it's straight at Casteels.

47' - Origi straight in the action. He's found by William but can't manufacture a decent enough angle and eventually shoots wide.

46' -We're back underway in the second period. Here's hoping for more of the same.

HALF TIME: Wolfsburg are ahead at the break after an entertaining half. But they may feel it should be by a bigger margin. Kiel will be relieved to have nicked an away goal with what, I'm fairly sure, was their only shot.

44' - The Wolfsburg fans behind the goal are jumping, they sense another one before the break.

40' - GOAL! Wolfsburg lead again! A loose ball bounced to Brekalo on the edge of the box and he absolutely leathered it. It was close to the keeper, who got a hand to it but could only push it in to the roof of the net.

38'- Knoche attempts a similarly outrageous run down the right for Wolfsburg but can't repeat the trick.

34' - GOAL! Out of nowhere, Kiel equalize. They build down the left before Drexler takes over and does incredibly well to jink past two men right on the byline and cutback for Schindler to stroke home. It's one each.

29' - Some sloppy clearances from Wolfsburg allow Kiel to enter their box for the first time, but Lewerenz' touch is dreadful. Wolfsburg break and Malli again beats his man before curling wide.

27' - Yunus Malli is absolutely bossing this game. Markus Anfang, the Kiel boss on his way to Cologne, needs to find a way to stop him.

23' - Kiel manage to get their foot on the ball for a time but the second division's top scorers haven't laid a glove on their opponents yet.

19' - Kiel scramble clear another Wolfsburg corner. They've not really been in this one so far.

16' - Malli is rampant. This time he slides in William on the right but his cross is dealt with by the keeper. Kiel struggling here.

13' -  GOAL! Wolfsburg's early dominance pays off. Again Malli is involved, dribbling brilliantly in to the box. His low cross is touched on by a teammate and bundled home by Origi.

10' - Origi can't quite bring a long ball under his spell. If he had, he'd have been in. All surprisingly open thus far.

8'- First signs from Kiel, who work it nicely through the middle but can't quite find the final ball.

7' - Wolfsburg have started much better than their opponents here. More good play from Malli forces a corner which Brooks is close to getting something on.

4' - Malli twists and turns on the edge of the box and finally finds Brekalo. He shoots low but Kiel keeper Kronholm is behind it.

3' - We have an early break in play because the linesman needs a new flag. It's not entirely clear why but there we go...

1' - The referee moves a water bottle off the pitch and we're off!

20:13 - The teams are out. Wolfsburg have tweeted theirs and are without the injured Daniel Didavi. Divock Origi - on loan from Liverpool starts up front.

—  And Kiel, tardy on the tweets, line up like this: Kronholm; Herrmann, Czichos, Schmidt, van den Bergh; Peitz; Schindler, Drexler, Kinsombi, Lewerenz; Ducksch. The last name on that list is the biggest danger to the top flight side. Marvin Ducksch has top scored with 18 goals in the 2. Bundesliga.

20:00 - Welcome to DW's live blog for the relegation playoff between Wolfsburg and Holstein Kiel. The two sides meet in this intra-division two-legged playoff after Wolfsburg finished 16th place in the Bundesliga and Holstein Kiel finished third in the second division.

Wolfsburg is participating in the playoff for the second straight season. They topped Eintracht Braunschweig a year ago by winning both legs 1-0.

Holstein Kiel is aiming for its second consecutive promotion after finishing second in the third division in the 2016-17 season.