Bundesliga: Union Berlin to play in front of 2,000 supporters

Union Berlin are to play their final home game against RB Leipzig on Saturday in front of 2,000 fans after the Berlin state senate approved a pilot project. It will be the first Bundesliga game with fans since October. 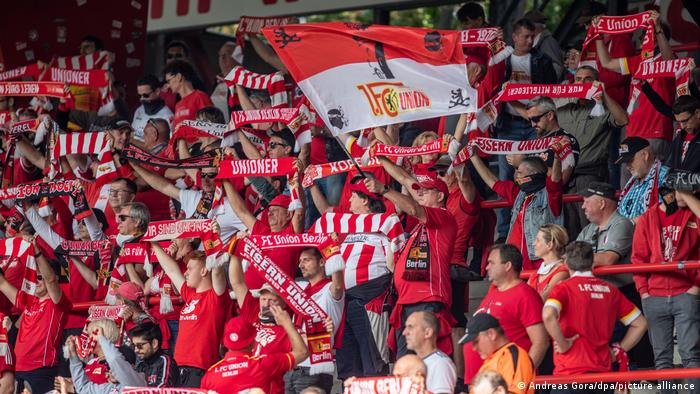 2,000 fans will be able to attend Union Berlin's final home game of the season

Football fans are to return to a German stadium for the first time since October on Saturday after the Berlin state senate approved a request by Bundesliga side Union Berlin to allow 2,000 supporters to attend their final game of the season against RB Leipzig.

With the coronavirus infection rate in Berlin sinking to beneath 100 new infections per 100,000 people on five consecutive days, the nationwide "emergency brake" set out by the federal government can be lifted, allowing for applications for test events to be submitted.

Union Berlin submitted such an application on Sunday and, with the local infection rate now at 68.6, it was approved on Monday.

"Union Berlin's comprehensive hygiene concept envisages mandatory testing for all visitors to the stadium," read a club statement. "People who have been fully vaccinated or who can prove a full recovery from COVID-19 are exempt from testing."

Union will distribute 2,000 tickets for the match at the Stadion an der Alten Försterei (the "stadium at the old forester's house") in the south-eastern Berlin suburb of Köpenick among its season ticket holders, by way of a ballot which is already underway.

"The approval for a home game with spectators on the final matchday is dependent upon the current pandemic situation," continued the statement. "The situation will be monitored and updated continuously."

Union Berlin were one of the last Bundesliga clubs to stage a match with fans when 4,500 attended the home game against Freiburg on October 24. Later that evening, the Revierderby between Borussia Dortmund and Schalke took place in front of 300 fans in what was, up until now, the last Bundesliga game with fans in a stadium.

Unable to attend games inside the stadium, some Union supporters have taken to supporting their team from the forest outside throughout the season.

Holstein Kiel reject chance to play in front of fans

Meanwhile, Bundesliga 2 side Holstein Kiel have turned down the chance to play their final home game of the season in front of supporters, despite the local city council allowing for the possibility.

"Professional football should not benefit from a special status in society when it comes to relaxing restrictions, and Holstein Kiel does not want preferential treatment ahead of other sports clubs," read a club statement ahead of the game against Darmstadt on Sunday, where second-placed Kiel could secure promotion to the Bundesliga.

"Even when a potential pilot project could allow us to play in front of a limited number of fans, we will play our final home game in the way we have been doing for the last seven months," added club president Steffen Schneekloth.