In Düsseldorf, Bayern Munich's interim coach, Hansi Flick, will be going for a third win from three. Scoring-machine Robert Lewandowski, on the other hand, will be aiming do something he's never managed before. 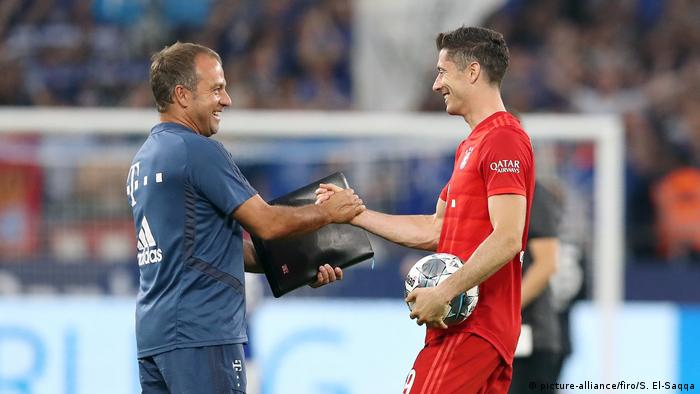 For a striker who has scored so many goals over the past few seasons, it is hard to imagine that there would be a Bundesliga club that Robert Lewandowski has yet to find the back of the net against. But Fortuna Düsseldorf happen to be that team - not that he has had all that many opportunities to do so, with the Rhineland club having spent most of the past decade in the second division.

Lewandowski's fifth career chance to break his Düsseldorf duck comes on Saturday, when the 31-year-old will also be looking to extend his record of having scored in every Bundesliga match so far this season to 12 - and add to his total of 16 goals.

Having won his first two matches at the helm, Saturday will also be a chance for Bayern's interim coach Hansi Flick to improve his prospects - if ever so slightly - of eventually getting the "interim" removed from his job description. So far the former assistant, who was promoted when Niko Kovac got fired following a dismal display in Frankfurt on Matchday 10, seems to have Bayern finally firing on all cylinders. This was evident in their 4-0 dismantling of Dortmund ahead of the international break.

This hadn't always been the case under Kovac, and while Lewandowski is a player who had also thrived under Flick's predecessor, speaking to the weekly SportBild, the striker revealed  that he and his teammates have been particularly impressed by their new boss' communication skills.

"The players noticed it right away," Lewandowski said. "But he's also good tactically too. I don't want to say that everything is super. But in just a few days he had done a very good job."

Lewandowski also gave Flick his vote of confidence to carry on as Bayern coach beyond the January transfer window. However, the interview was seemingly conducted before Mauricio Pochettino came onto the market. Since Tottenham sacked Pochettino on Tuesday, there has been much speculation that the Argentine could be a prime candidate for Bayern - who contributed to his downfall in North London with last month's 7-2 drubbing of the Lilywhites in in the Champions League.

Bayern's bosses though have committed to keeping Flick in place until at least the end of the year - making Saturday's game his first of at least eight auditions to keep the big job.

While the Bavarians travel to the Rhineland as the clear favorites, Flick and his players will know enough not to take Fortuna lightly. Düsseldorf did manage to take a point away from the Allianz Arena a year ago, and while they are very much in a battle against the drop, they have only lost one game at home this season. Still, Funkel knows everything will have to go just right if Fortuna are going to have a chance of getting a result. 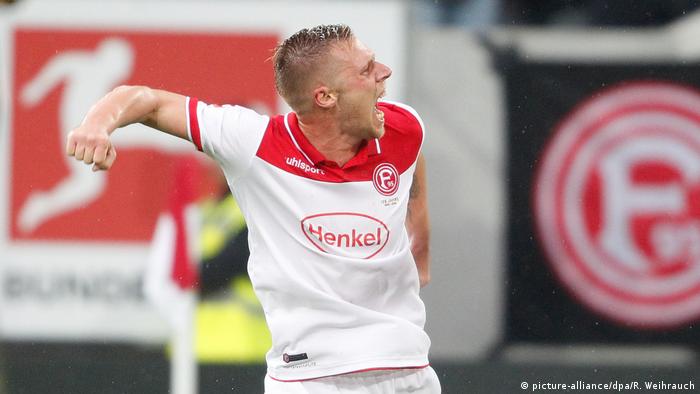 Rouwen Hennings has been in fine form for Fortuna

"We'll need to shut down the space and hope that they don't capitalize on every opportunity," the 65-year-old told reporters on Thursday. "We need a goalkeeper who can outdo himself. We will invest an awful lot of energy on the pitch - running, running and more running."

Presumably much of this running will be designed to try to keep Lewandowski at bay. But while the Poland international alone has scored one more goal in the Bundesliga than Düsseldorf's entire team, Fortuna aren't without a striking force of their own.  Rouwen Hennings is in the form of his life, with nine goals from the first 11 games of the season,  leading to the odd comparison with his Bayern counterpart. This brings a quick smile to the 32-year-old's face.

"Lewandowski's been performing at a very high level for years," he told public broadcaster ARD. "With me it is just a phase."

Düsseldorf will be hoping that this phase continues at least into late Saturday afternoon.