Union Berlin claimed another big-name casualty as their extraordinary Bundesliga season continues. This time it was the turn of Bayer Leverkusen to taste defeat at Union, whose hero was almost the villain. 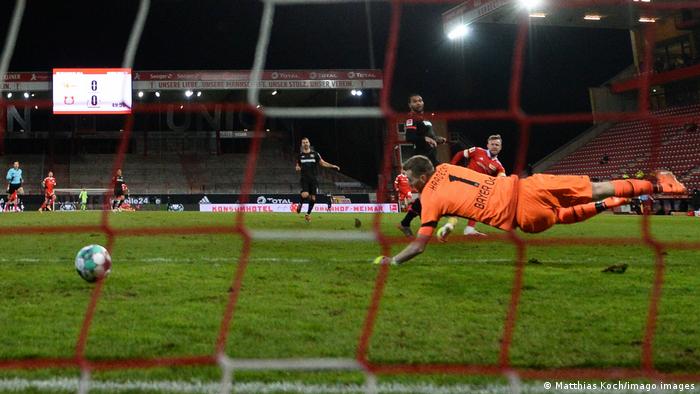 It's not often that a substituted substitute is the hero. On a night when Union Berlin's remarkable season hit new heights, Cedric Teuchert emerged as the hero when he'd looked like being the fall guy.

Teuchert, a first half replacement for the injured Sheraldo Becker, emerged as Union's chief goal threat – and when he went clean through five minutes into the second half, everything stood still for a moment.

With only goalkeeper Lukas Hradecky to beat, Teuchert's shot hit both posts, cannoning off the inside of the right-hand post and spinning along the goalline onto the other before rolling away. It was as close as Teuchert could have got without scoring, but his missed chance was the only clear cut opening on a night when they were at a premium.

With the game drifting towards a stalemate, Teuchert elevated himself to hero status. Again faced with a one-on-one with Hradecky, who was this time furiously backpedaling, Teuchert this time had two Leverkusen defenders for company. But the former Schalke forward kept his cool and forced the ball through Hradecky and into the back of the net.

Union coach Urs Fischer decided that Teuchert's work was done and subbed the sub before the restart as he looked to protect a precious lead for the final few minutes. But there was to be no fightback from Leverkusen, whose fleeting title challenge is quickly receding following four games without a win having started the season with a run of 12 games unbeaten.

If it's of any consolation to Leverkusen – and it won't be – they aren't the first big team to come unstuck in this corner of East Berlin. Bayern Munich and Borussia Dortmund have both failed to win at the Stadion An der Alten Försterei in the past month, with Union making it a cauldron – even without their boisterous home support.

However, the night was soured somewhat by Leverkusen midfielder Nadiem Amiri's claims via teammate Jonathan Tah's post-match comments that he suffered racist abuse from a Union player. Germany international Amiri was remonstrating with some Union players at full time following an incident that seemed to occur just after Union had scored.

If Union fans are allowed to return this season they will find a team that has made their stadium a cauldron and a club, that for now at least, finds itself in the Champions League places and just a point behind the team that have become their latest big-name scalp.