The Marco Rose era got off to an emphatic start as Borussia Dortmund blew away Eintracht Frankfurt. Erling Haaland was involved in all five goals as the Black and Yellows sent an early message to Bayern Munich. 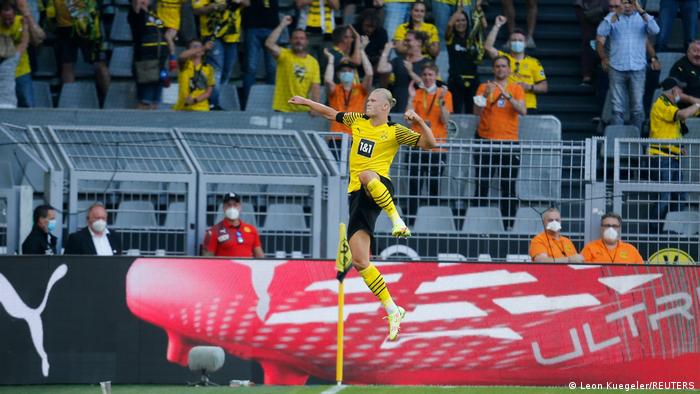 When Erling Haaland starts running towards goal, he doesn't stop until the ball hits the back of the net. And perhaps, this season, he won't stop until he has the Bundesliga trophy in his hands.

The Norwegian hitman was involved in all five goals on Saturday, scoring two and setting up the other three, as Borussia Dortmund got their season off to an exhilarating start against a thoroughly overwhelmed Eintracht Frankfurt.

Just a few hours after Jadon Sancho made his first appearance for Manchester United, his ex-club proved emphatically that there is life after the English winger.

With captain Marco Reus opening the scoring with his 100th Bundesliga goal, and Thorgan Hazard and Gio Reyna also on target, it was the perfect start for new head coach Marco Rose – and a first demonstration of the football he wants to play.

"I'm absolutely delighted with the team's performance in front of 25,000 fans," said Rose at full-time. "Today was all about starting well and that's what we did." 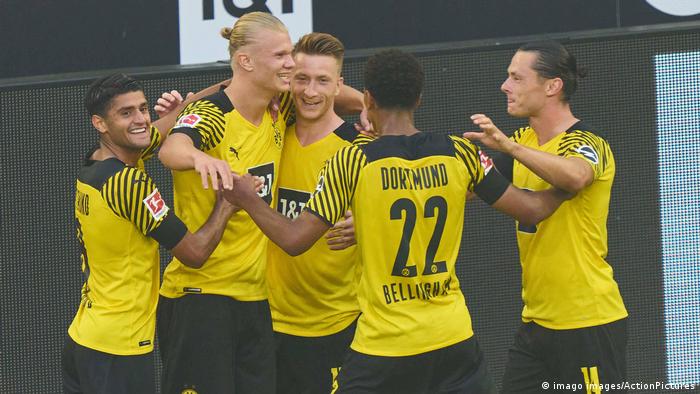 Dahoud and Bellingham started together in a new-look midfield

The return of heavy metal football

Early indications point towards a brand of football reminiscent of Jürgen Klopp's tenure: a high press, aggressive defending, and fast-paced attacking football, a common theme in the build-up to all five goals, and a style that suits Haaland down to the ground.

"The first training sessions under [Rose] were quite strange for us because it's not what we've been used to the past years," midfielder Mo Dahoud had admitted pre-match. "We hadn't been playing with such an extreme press so it was unusual for us but things have got better week by week."

The opening goal was a case in point. Jude Bellingham and Hazard combined to win possession inside the Frankfurt half and fed Haaland, who in turn found Reus.

After Frankfurt had drawn level thanks to a freak Felix Passlack own goal, Haaland drove forward again, this time finding Hazard to restore Dortmund's lead. Two minutes later, he was on target himself, scoring his 61st goal in 61 Dortmund appearances. Later, he would make that 62.

Reus: 'Haaland is the complete package'

"We have to be careful not to praise him too much, but he is already a complete package," Reus said of Haaland. "Erling is an unbelievable team player, he showed that with his assists and goals," added Rose. "He deserved this today."

There are still 33 games to go but, if Dortmund have any ambitions of preventing Bayern Munich from winning a tenth Bundesliga title in a tow, then Haaland – and Reus – will be key.

Rose's preferred 4-4-2 system looks tailormade for both of them, giving Haaland a strike partner (today alternately Reus and Hazard, but in future likely Dutch signing Donyell Malen), and allowing Reus to conduct play as a no.10. 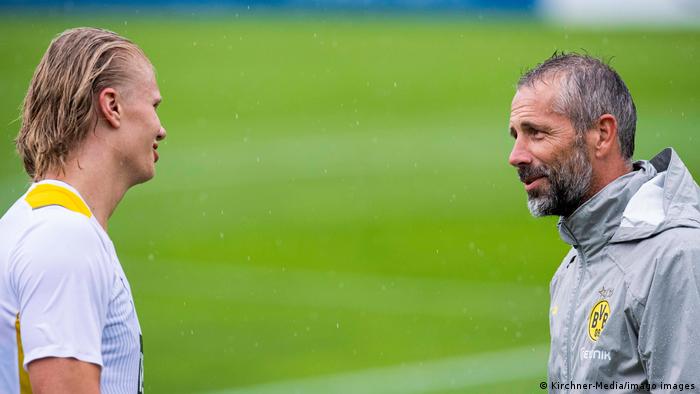 Rose has imposed his ideas early and won't shy away from making big calls. Summer-signing Gregor Kobel is the new number one, with Swiss compatriot Roman Bürki persistently linked with a move away after six seasons with the club.

A stalwart in Lucien Favre's midfield, Thomas Delaney was left on the bench in favor of the less defensively solid pairing of Dahoud and Bellingham – but their combination of creativity and grit was more than enough to deal with Frankfurt.

Meanwhile, injuries saw Axel Witsel moved into an unfamiliar center back role. The midfielder getting the nod over the more natural fit in the form of the still inexperienced Antonios Papadopoulus was the only sign of caution from the new coach on a day of otherwise furious attacking football.

However, that calamitous own goal to make it 1-1 shows that it won't all be smooth sailing. Exactly what Passlack was thinking with his pass-cum shot to new keeper Kobl is unclear.

Rose has a long season ahead and work to do. But he has a clear idea of how he wants Borussia Dortmund to play – and Erling Haaland looks like he's on board.