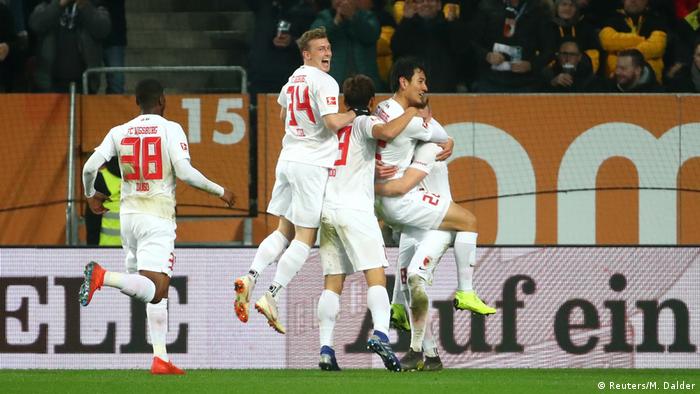 Dortmund had never lost in Augsburg in their Bundesliga history going into Friday's game, and were boosted by the return of captain Marco Reus to the starting lineup.

Yet fairly early on, it was clear to see that Lucien Favre's side was struggling for rhythm, frequently conceding possession to a five-man Augsburg midfield that was pressing hard and high when appropriate.

For both goals, defensive errors gifted the hosts their chance. Axel Zadagou was at fault with the first, allowing Andre Hahn to pinch the ball and locate Ji Dong-won in the box. After a tussle with Manuel Akanji in the area, Ji was finally able to rifle the ball home at the second attempt. 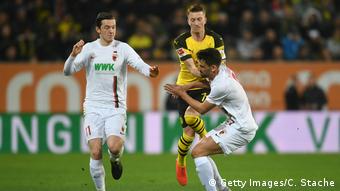 Reus' return meant Dortmund had their leader back, though it also led to them playing without a genuine striker

If the opener was an ugly finish, Ji's second was a work of art. This time the beneficiary of a sloppy Achraf Hakimi pass, Ji found himself with just Zagadou and Bürki to beat. He paused, seeking an opening, then deftly chipped the ball over Zagadou's shoulder and beyond the reach of Bürki into the far corner.

"[It's] extremely bitter," Marco Reus told Eurosport after the game. "We scored the goals ourselves thanks to two defensive errors ... You can't give the ball away that cheaply."

Lucien Favre brought on Paco Alcacer — who had netted a hat trick in the other leg of this fixture in October — for the recovering Reus late in the game, and the Spaniard was able to pull one back for BVB.

But Augsburg's second hero of the night wasn't a veteran South Korean striker, but rather a young Swiss goalie. Gregor Kobel made more than 10 saves on the night, including some exceptional antics to deny Jacob Bruun Larsen (twice), Alcacer and Mario Götze in the dying minutes as Dortmund piled forward seeking an equalizer.

The defeat means that Bayern Munich can pull level with Dortmund on Saturday, should they manage to beat Borussia Mönchengladbach. Goal difference means Dortmund are highly likely to retain 1st place on paper, but their once-healthy points advantage may have evaporated entirely before the weeknd's done.

90+2' Dortmund piling forward now, but time's short. There will be 4 added minutes.

88' Alcacer lays it off to Götze who tries his luck from range. But Augsburg goalie Kober says no, for the 8th time tonight.

84' Touchline argey-bargey after a foul by Dortmund's Diallo. Raphael Guerreiro, the most unruly of the subsequent rabble in the referee's eyes, picks up a yellow.

81' GOAL! Augsburg 2-1 Dortmund. Paco Alcacer.
Dortmund break free down the right, as Götze feeds Jadon Sancho. The young Englishman cut it back to Götze, who immediately passes the buck on to Alcacer. The super-sub nets to bring the game back within reach. That's four this season against Augsburg for the Spaniard.

75' Paco Alcacer denied on the volley by Kober. The Spaniard latched on to a long, long cross from Mario Götze and pulled the trigger without hesitation. Top save.

68' GOAL! Ji strikes again!
Another terrible error by Dortmund in their own half, this time by Hakimi, gifts Augsburg an attack. Ji Dong-won appeared short on options with Zagadou shadowing him closely. But the South Korean picked his moment to chip a left-footed finish over Zagadou's shoulder and out of Roman Bürki's reach. Picture-book stuff.

64' Very stale so far from the league leaders in the second half. Little surprise that striker Paco Alcacer and Raphael Guerreiro are both warming up on the sidelines. An out-and-out striker, in particular, would not go amiss.

53' Reus feeds Sancho who clatters the outside of the post. But it's all for naught; Reus was just a few inches offside.

47' The first chance of the half falls to Augsburg and Ji on the break. But the Korean didn't catch the volley right after a cross from Hahn.

46' We're back underway in Augsburg, and suddenly the rain's falling.

Former Dortmund legend Matthias Sammer has kind words for Augsburg in the break, saying their organization and desire is evident and is paying off.

"One team is fighting for their lives while the other, erm, would rather like to win the game," Sammer said on Eurosport.

HT analysis: The gulf in class has been apparent far less than it should be thus far. Flashes of individual skill do attest to Dortmund's quality, but the side has been lackadaisical in possession and has struggled to clear Augsburg's hard-working midfield line. As a result, it's probably fair to say Ji's chance was the best of the game so far, although Denmark's Bruun Larsen had a splendid opportunity to calm Dortmund's nerves just before the break.

45+1' The half concludes with Dortmund's latest chance to cause some chaos in the box with a free kick. Augsburg's defense manage to deal with the ball, and Axel Witsel is left on the ground in the area after a tough challenge. But the Belgian's quickly back on his feet.

42' Huge chance for Jacob Bruun Larsen, connecting with a cross from the right. Kobel in Augsburg's goal palms it away.

33' Foul by Akanji on Ji, but the Augsburg attacker manages to shrug off the knock.

24' GOAL! Augsburg 1-0 Dortmund (Ji Dong-won)
A mistake by Zagadou in his own half provided Augsburg with possession. Andre Hahn capitalized on the right flank, firing a dangerous low cross into the box. At the second or third attempt, scrapping with a defender, Ji Dong-won was able to clatter the ball into the roof of the net with his left foot. As last time in October, Augsburg draw first blood.

17' Konstantinos Stafylidis is down, holding his hamstring. Now hobbling off the pitch, to be replaced by Georg Teigl. Augsburg's defense was already looking a little light, this will probably force Philipp Max to cover at left-back with Teigl playing in his more natural midfield home.

10' Dortmund need good games tonight from their teenage wingers Bruun Larsen and Sancho. With Reus playing in attacking midfield and Götze as a false 9, there should be excellent service for the wide men, but also gaps to fill at the tip of the BVB spear.

2' Penalty appeal for Augsburg's Ji Dong-won is waved away. Eventful start to this one.

1' Augsburg almost open the door with a defensive error right at the start. But the pass to Bruun Larsen was just behind the Dane, who couldn't turn to face goal quickly enough. A highly promising early chance peters out.

— The players are in the tunnel. We should be off and running within five minutes.

— We've half an hour before kick off, so why not warm up for the rest of the Bundesliga weekend? Struggling Schalke, for instance, are at Fortuna Düsseldorf with real pressure on coach Domenico Tedesco. If you'd like to learn more (and which BVB fan doesn't enjoy reading about Schalke's woes?), then look no further:  Bundesliga: Spotlight on Domenico Tedesco as struggling Schalke reshuffle

— Marco Reus is back in the first team for Favre after 24 days out injured. There's a printed team sheet circulating in Augsburg suggesting that it's actually Mario Götze wearing the armband tonight, but we believe that's a typo as Götze appears right above Reus. Given that the club captain's back in the first team, it would seem logical for him to lead the side.

— The last meeting between these two, in Dortmund in October, was a barnstorming game. It finished 4-3 to Dortmund, with Paco Alcacer netting the decisive goal in the sixth minute of second-half stoppage time. Alcacer grabbed a hat trick that night, when Augsburg led twice. Tonight, he's waiting on the bench to provide reinforcements. 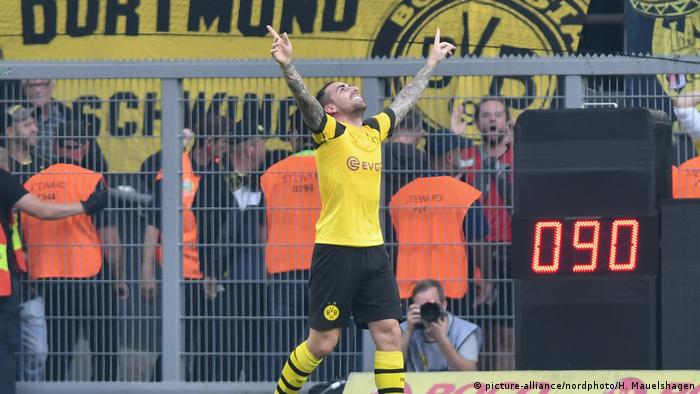 Despite his hat trick when last these two met, Alcacer's on the bench this evening

— Augsburg have never beaten Dortmund in the Bundesliga at home in seven attempts, losing five of those. Dortmund have never won their first eight away Bundesliga matches against any opponent, but Lucien Favre and co. would surely welcome breaking that record this evening.

— Augsburg, meanwhile, will hope for goals from Ji Dong-won or perhaps Schalke old-boy Philipp Max. Quite an attacking line up for the Pine Cones, who have little to lose as rank outsiders this evening.

— Here's a look at the evening's starting XIs. Dortmund go with Mario Götze up front, plus Jadon Sancho, Marco Reus and Jacob Bruun Larsen in attacking midfield. The back line of Hakimi, Akanji, Zagadou and Diallo is also somewhat closer to full strength after some tricky weeks.

Hello and welcome to our live coverage of the opening game of Matchday 24 in the Bundesliga. Borussia Dortmund travel to Augsburg, league leaders vs. 15th place, and potentially even Mario vs. Felix Götze. Mario Götze will lead the line for Dortmund but his younger brother Felix is only on Augsburg's bench.