The refugee crisis is sweeping across Europe and while many governments stall in their search for answer, German football clubs have shown incredible generosity in their attempt to help those searching for a new home. 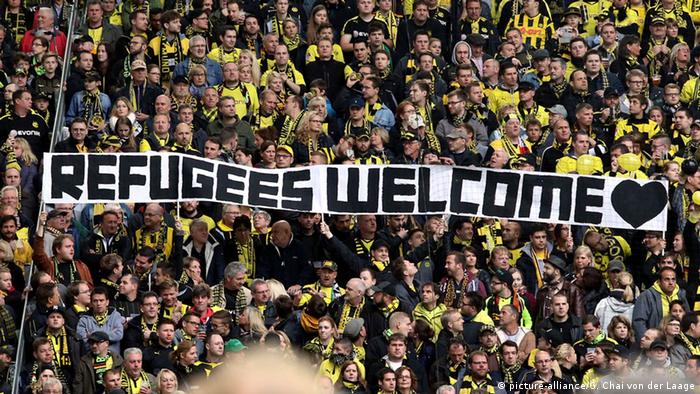 German football has long been hailed as one of the few remaining leagues where the focus is still put on people rather than money. Over the last few weeks, that focus has extended well beyond the terraces of their own stadiums as the majority of Germany's top-flight clubs have extended their arm to offer support and respite to the millions of refugees currently looking for a new home. With help from an article on Vice Sports Germany here is a look at what Bundesliga clubsare doing to make a difference.

On September 3, Bayern Munich released a statement saying they would be providing over a million euros for refugee projects, as well as offer training camps, German classes and food. Last weekend, in their home game against Leverkusen the following banner was seen at Bayern's ground, showing the message: "Stirring up hatred against broke Greeks and refugees. The problem is called racism. [Get] racism out of minds."

At the end of August, Borussia Dortmund invited 220 refugees to watch their Europa League qualifier second leg against Odds BK as part of the city's "Angekommen in Dortmund" (Arriving in Dortmund) campaign. The focus of the initiative is to overcome barriers, make sure help arrives and that refugees settle in Dortmund. That number, according to an article from English newspaper "The Independent" is more than the number of Syrians than the UK government has welcomed through its refugee relocation scheme. On top of that, "leuchte auf" (Light Up) is a club project that focuses on social issues and that, like the club motto, aims to deliver true love.

Rival club Schalke has also been busy. Having invited 100 refugees to their opening home game of the season, they also founded the idea of the "Kumpel-Kiste" (friend's box) where clothes and toys can be sent to refugees. Recently, Schalke also released a video that showed club legend Gerald Asamoah talking about the importance of understanding what it is to be a human and that uniting in defiance is the way to achieve a great deal. Dortmund responded, saying "separated by colors, but united on this."

Other Bundesliga clubs have also been involved. Werder Bremen has founded a "Bleib am Ball" (Stay on the Ball) project to help refugees in the region, while both Hannover and Hoffenheim have delivered kits and shoes to help. Ingolstadt are working with a school in their region to combat racism and Cologne has continued their long-standing work with refugee groups, citing "football unites people." With a similar focus, Stuttgart is working with the club's own initiative program and the city theatre to help those in need.

Leverkusen have started a project called "Bayer 04 macht Schule" (Bayer 04 does school) where the focus is on helping refugee children take the steps to join a club. Of the 42,000 euros ($47,000) Mainz collected from their "Spiel der Herzen" (Game of the heart) charity project, 14,000 euros was given to the city's refugee council. Even second division sides have shown their generosity. Fortuna Düsseldorf invited 150 refugees to their game against Freiburg, while earlier in the year, Dynamo Dresden offered 300 tickets for a league game as part of a further welcome campaign.

Dresden's chairman Robert Schäfer posted a statement on the club website stating: "Hospitality, respect and openness towards asylum seekers follows directly on from sporting values held by our teams. Refugees come to us because they are persecuted in their homelands for their beliefs and fear for life and limb at home. As sports clubs, we want to show these people that after all they have suffered, they are welcome in our midst."

Last year, a collective campaign saw "refugees welcome" signs in a host of football stadiums across Germany. Support is gathering on social media to try and organise something similar in England.

Germany's national team also released a video to show their stance against violence and racism, with team manager Oliver Bierhoff stating the team were keen to send a message.

While of course, none of these efforts can be seen as permanent solutions to thousands of problems, it does show that even in a world where money and status are inflated beyond comprehension, a helping hand is still being offered.