Bayern Munich were crowned Bundesliga champions for the ninth year in a row after their closest challengers RB Leipzig lost to Borussia Dortmund. The champions celebrated in style by thrashing Borussia Mönchengladbach. 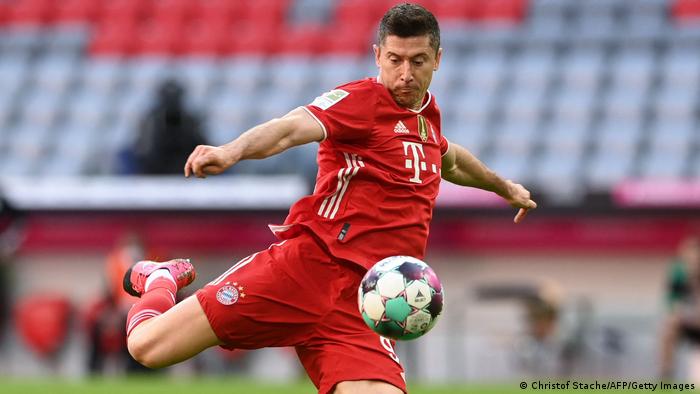 Lewandowski is now just one goal behind Gerd Müller’s Bundesliga record of 40 goals in a season, and the Pole has two more games to beat the record. Kingsley Coman, Thomas Müller and Leroy Sané also got on the scoresheet as the champions ran out emphatic winners.

It was another irresistible performance by Bayern, whose status as champions had already been renwed before kick off following RB Leipzig’s 3-2 defeat at Borussia Dortmund earlier in the day.

The silverware is coach Hansi Flick's seventh in a season and a half as Bayern coach before he departs at the end of the season.

Catch up with all the action and reaction as it happened below (all times CET):

"We're not just here to celebrate the championship with them," promised Borussia Mönchengladbach coach Marco Rose pre-match. But that's precisely what his pitiful team did.

But today wasn't about the hapless Foals; today was about Bayern Munich's 30th Bundesliga title, their 31st German championship overall and their ninth in a row, an achievement which adds a fifth star to Bayern's badge.

18-year-old Tanguy Nianzou has only been on the pitch for ten minutes after replacing Leon Goretzka. But after taking out Gladbach's Breel Embolo with a rash challenge as the last man, the referee consults with the video assistant and sends him off.

With Bayern comfortably hammering Gladbach, there has been further praise from around the Bundesliga:

"They're the gold standard, at least in the Bundesliga. There's nothing to do but congratulate them."
- Frank Baumann (Werder Bremen chief executive)

"Congratulations to Bayern on another deserved championship and a sensational Bundesliga season. Get your game finished and then enjoy the party."
- Sebastian Hoeness (former Bayern youth coach and current Hoffenheim head coach)

"A turbulent season off the pitch but as calm as ever on it. They even exited the Champions League with their heads held high. The only disappointment was the cup defeat to Kiel. Of course they have the best team, but it's impressive how much hunger they all have."
- Dietmar Hamann (former Bayern and Liverpool midfielder and now Sky TV pundit) 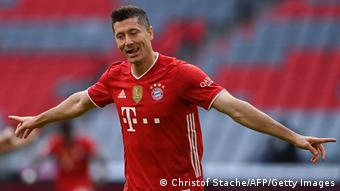 Robert Lewandowski completes his hat-trick from the penalty spot. It's his 39th goal of the season and he's just one away from equalling Gerd Müller's record.

He could even beat it. Today. There are still over 20 minutes remaining ...

In all seriousness though, the police also congratulated Bayern while reminding fans to adhere to the local coronavirus restrictions while celebrating. "That's where the fun stops."

We thought it best to save the goal updates for half-time because they are coming thick and fast.

Robert Lewandowski got his second of the evening ten minutes before the break, bringing him within just two of Gerd Müller's record.

And then, right on half-time, Kingsley Coman got in on the act to make it 4-0.

Gladbach coach Marco Rose said pre-match that they weren't here to just celebrate the title with Bayern ... well perhaps he ought to tell his players that in the dressing room. The Foals have been a shambles.

Borussia Dortmund couldn't challenge Bayern this season, but it was their 3-2 win over RB Leipzig which ultimately handed Bayern the title.

"I think it’s the first time in history that the German champions were crowned on the team bus," said Dortmund head coach Edin Terzic. "But they managed that today, so congratulations to Munich. They deserve to be German champions after a very good season, a very consistent season.

"But we're happier about the points that we got today."

Indeed, it was a dramatic and important win for Dortmund, whose Champions League hopes are still alive ...

This is far too easy for the new champions who deservedly double their lead thanks to Thomas Müller's 11th goal of the season.

That's why they're champions.

Speaking of records, that was Robert Lewandowski's earliest ever Bundesliga goal. They're not messing around here.

Gladbach coach Marco Rose said he expected Bayern to approach this game with "great joy" - and that certainly seems to be the case as Robert Lewandowski fires them into the lead after just two minutes.

It's the Pole's 37th goal of the season as he closes in on Gerd Müller's Bundesliga record (40).

Freshly confirmed as champions for the ninth year in a row, the pressure is off Bayern Munich kick off at home to Borussia Mönchengladbach 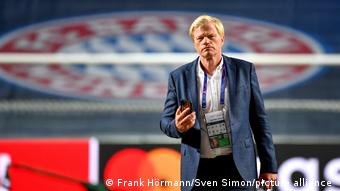 "Hansi has succeeded in gelling this ensemble of super stars and getting the very best out of them, so his part in this title has been massive," Kahn told Sky after watching RB Leipzig's loss to Borussia Dortmund in the Allianz Arena along with the visiting officials from Borussia Mönchengladbach.

"It was fantastic, of course. Our joy was perhaps a bit more controlled because of our experience, but you never get bored of winning the league," said the former Bayern goalkeeper and captain, who will take over from Karl-Heinz Rummenigge in January 2022.

"We have matched Juventus' record of nine domestic titles in a row and next season we have the chance to do something that no team on this planet has ever achieved and win ten."

As DW's Ali Farhat points out however, Herr Kahn is not entirely right ... The following clubs have already won ten straight domestic titles or more, and Bayern still have some way to go to catch former Lativan giants Skonto Riga, who won 14 consecutive titles between their formation in 1991 and 2014. They were wound up in 2016.

18:00 - Robert Lewandowski still has business to attend to

Bayern Munich may have achieved their aim of winning the title before even kicking off against Gladbach, but Robert Lewandowski still has his eyes set on a personal prize.

The Polish striker currently has 36 Bundesliga goals this season, four short of Bayern legend Gerd Müller's 40 goals in the 1971/72 season. Can Lewandowski equal or break the record in Bayern's remaining three games?

This evening's game between Bayern Munich and Borussia Mönchengladbach may now be meaningless for the newly-crowned champions, but not for their opponents, who are still fighting for a Europa League place.

Gladbach head coach Marco Rose, who will take charge of Borussia Dortmund next season, congratuled Bayern and praised their "great mentality and great togetherness, everything you need to be champions." But he insisted that it won't make his team's job any easier this evening:

"I experienced it myself in Salzburg that everything can come much easier when you're so euphoric [because of winning the league], so I'm sure that Bayern will approach this game with a lot of joy. But we're not here to celebrate the championship with them; we're here for the points."

There was a certain irony that it was Julian Nagelsmann's team which ultimately handed Bayern Munich the title. Nagelsmann will take over from Hansi Flick as Bayern head coach next season but it was his current team, RB Leipzig, who lost to Dortmund to confirm Bayern's latest triumph.

Not that anyone should be suspicious; Nagelsmann and RB have been Bayern's closest challengers this season and there was no sign of them handing the title to Bayern without a fight today as they battled back from 0-2 down in Dortmund. At that point, Bayern would have had to get a point themselves to win the league - until Jadon Sancho scored a late winner for BVB.

Bayern Munich have wrapped up their ninth consecutive Bundesliga title - but only five players have been there for all of them!

Bayern Munich's players received confirmation of their title win via their smartphones while taking a pre-match stroll on the pitch in Munich ahead of their game against Borussia Mönchengladbach this evening.

Leroy Sane didn't even make it that far, watching the Dortmund game in the tunnel.

17:30 – Bayern Munich papering over the cracks?

It sounds ridiculous to suggest that a ninth consecutive Bundesliga title has been anything other than a predictable walk in the park – but all has not been well in Munich this season.

A rift emerged between head coach Hansi Flick and sporting director Hasan Salihamidzic as early as January 2020, with the two disagreeing over transfer policy and squad building. The dispute culminated with Flick telling Salihamidzic to "just shut up" on the team bus ahead of a recent game.

While the club ultimately backed Salihamidzic, Flick did appear to have been proven right when an injury-depleted Bayern team lost to PSG in the Champions League quarterfinal.

For departing Bayern Munich head coach Hansi Flick, it's his seventh and final title in charge of the Bavarians - in just 16 months in charge after becoming head coach in November 2019.

In his first season, he won the treble of Bundesliga, German Cup and Champions League, before adding the German Super Cup, UEFA Super Cup and FIFA Club World Cup to make it a historic sextuplet.

This season, Bayern were knocked out of the German Cup by Holstein Kiel and beaten in the Champions League by Paris Saint-Germain – but have still wrapped up the league title with two matchday remaining.

RB Leipzig's 3-2 defeat to Borussia Dortmund means they can no longer catch Bayern Munich, who are crowned Bundesliga champions for the ninth season in a row. Congratulations!

Bayern themselves are in action at home to Borussia Mönchengladbach this evening (kick-off at 18:30 CET), a game which now only has relevance for Gladbach. Bayern will not be presented with the Bundesliga trophy today, but rather on the final day of the season at home to Augsburg on May 22.