Football returned as the Bundesliga found itself in the spotlight like never before. From Erling Haaland to Bayern Munich in Berlin, here's all the key information on the Bundesliga's return. It was odd and it wasn't the way we remembered it, but football returned. Empty stadiums, physically-distanced subs all wearing masks, audible player shouts - it was all very different as Bundesliga teams returned to action following the DFL's (German Football League) hygiene protocols. After a slow start, the goals started to come too.

- Dortmund, Gladbach and Hertha fly out of the blocks

On the pitch, Dortmund, Gladbach and Hertha showed no signs of rust as they grabbed impressive wins on the first weekend back. Dortmund drubbed Schalke 4-0 with Erling Haaland impressing again, Gladbach beat Frankfurt 3-1 in a scoreline that might have been higher and Hertha comfortably beat Hoffenheim in Bruno Labbadia's first game in charge of the capital club.

From one capital side to another, but it was a very different result for Union Berlin, who never really got started against Bayern. The champions went ahead through Robert Lewandowski's penalty, which was his 26th Bundesliga goal of the season. Benjamin Pavard secured the win at the Stadion An Der Alten Försterei, making it a remarkable 34 points from the last 36 for coach Hansi Flick. The champions remain four points clear at the top.

While all eyes tuned in for Dortmund's derby against Schalke and Bayern Munich's trip to the German capital to face Union, one of the most entertaining, end-to-end games of the weekend was Cologne vs. Mainz. Having taken a deserved 2-0 lead, host's Cologne suddenly looked tired and the visitors earned a point thanks to a game-changing substitute appearance from Liverpool loanee Taiwo Awoniyi. Bayern's solid but unspectacular 2-0 win against Union later on Sunday just couldn't compare.

RB Leipzig were held by Freiburg and might have been left empty-handed at the end of it all were it not for a VAR that ruled out Robin Koch's injury-time goal. It's good to know that even in this unusual form, football still has some familiar things about it.

"What better way to restart the season than with a win like this."
Julian Brandt after Dortmund's derby win 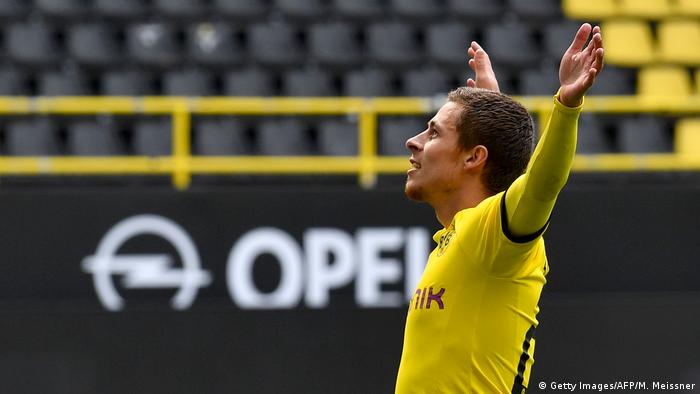 Thorgan Hazard celebrates in front of an empty stand

"We talked a lot beforehand about it and knew it wasn't any different to the game we played as kids: without fans and just full of fun."
Roman Bürki after Dortmund's win

"I left the coaching zone because I was so happy and then I realized, oops! I went back in and made sure not to get too close to anyone."
Wolfsburg head coach Oliver Glasner after his side scored a last-minute winner against Augsburg

"I won't rule it out but if we draw today and lose in Freiburg then it's too few points to be German champions."
Julian Nagelsmann after RB Leipzig's draw

"Of course it's good when you can hear what the coach has to say, but I would rather have people there and not be able to hear the coach. Sometimes you hear negative comments too."
Freiburg's Lucas Höler

"You can't really hide emotions. I asked our doctor before the game if the goal would still stand if we did that. That was the most important thing for me. It's difficult in such moments. Emotions bubble over and we have waited a really long time to be allowed to play again."
Hertha Berlin's Vedad Ibisevic on his celebration

"Robert Lewandowski played well today. He's in top shape. We missed the chance to get him into the game more today."
Bayern head coach Hansi Flick

"It certainly had a bit of an old timer, seven in the evening, floodlights game feel to it."
Thomas Müller on the empty stadium

"It's a bit surreal. Over the last two hours, I got texts from all over the world. They all wrote they'd be sitting at home and watching us play. But driving through the city, it was empty."Borussia Dortmund CEO Hans-Joachim Watzke before the derby

"It wasn't a kiss, neither a celebration. I apologize for putting my hands on Marko Grujic's face. I was giving him instructions about a set-piece."
Dedryck Boyata on Instagram about his celebration

- Erling Haaland scored the first goal after the restart, and it was his 13th in his first 12 matches in all competitions for Dortmund. Only Werder Bremen's Klaus Matischek (1965) achieved this before him for a Bundesliga team.

- For the first time in league history, Dortmund kept a clean sheet in both meetings with Schalke in the same season.

- Robert Lewandowski has now scored 40+ goals in all competitions in each of the last five seasons. 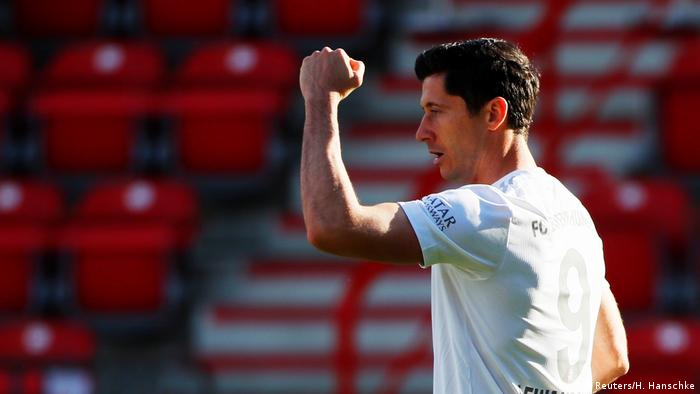 - Three of the 12 teams in action on Saturday used the newly allowed five substitutes. Schalke were the first team in league history to make five subs, although second-division Heidenheim were the first team ever to do so. Teams were restricted to making their subs in just three windows.

- After 66 days, the Bundesliga returned. According to media magazine DWDL, broadcaster Sky had the most viewers ever on Saturday. Apparently, more than six million people watched the Bundesliga, either on free TV or as a subscriber.

- Florian Wirtz became Bayer Leverkusen's youngest ever player in their 4-1 away win over Werder Bremen on Monday night. But he was upstaged by the man from whom he stole the title: Kai Havertz.

- Vedad Ibisevic is the only player who has scored a goal in the Bundesliga in every calendar year between 2006 and 2020.

- In Gladbach's history, Marco Rose has collected the most points (52) of any head coach after the first 26 games in the Bundesliga.

- As feared, the return to football after only a week of team training meant that injuries were to be expected. Dortmund suffered perhaps the worst of this. Jadon Sancho (calf) was due to be replaced by Gio Reyna, but the US star injured himself in the warm-up. Sancho did come on late, to replace Thorgan Hazard who seemed to have picked up a knock. After the game, Lucien Favre confirmed that the already injured Dan-Axel Zagadou would not return before the end of the season.

Managing player fitness over the next few weeks will be key for head coaches.

There were no fans in the stands this weekend as football returned following the DFL's hygiene protocols. In Cologne's stadium, some of the seats were covered in jerseys and toy goats as fans set out lucky charms for their team. Outside the stadium, there was a sofa with the words "against ghost games" written on it as well as banners emphasizing that football was "nothing without fans."

Goal celebrations were supposed to be done alone or, if with others, then only with feet or elbows. However, Hertha and Gladbach seemed to celebrate in much more usual fashion with hugs and plenty of contact. How to celebrate is more of a recommendation than an official rule in the DFL's hygiene concept though, which means Hertha and Gladbach's players will not be sanctioned.

The following day on a national football talk show though, Bavarian minister president Markus Söder said: "I'm pretty sure the league will sharpen their focus, so as to make it clearer."

It now seems possible that the DFL will amend this rule ahead of the next matchday.