In the heart of France, Guédelon castle has been under construction for almost 25 years – using only medieval methods. Find out what this is all about in part nine of our series "Extreme Places". 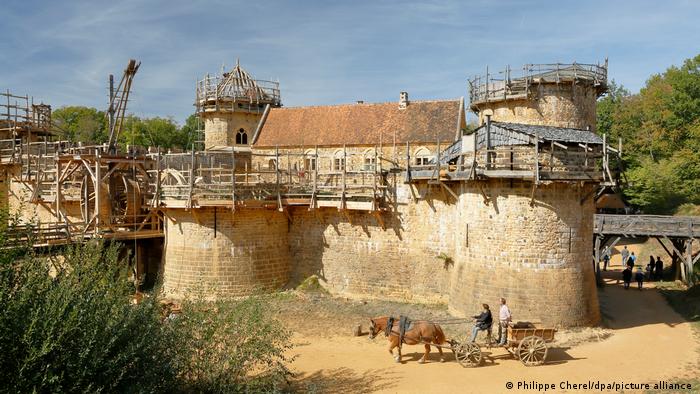 The Guédelon building site is always very busy. There's hammering, sawing and work going on all around. After all, a whole castle is to be built here – a castle as it would have looked in the Middle Ages, surrounded by a fortification wall, with guard towers and a moat. When you look a little closer, however, you realize that not only should the building appear as if it were made in the Middle Ages, the handicraft technologies being used are also anything but modern. 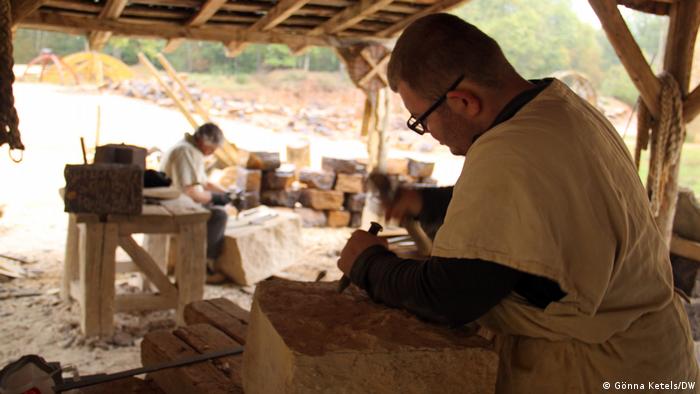 Stonemasons in Guédelon: each stone for the castle is worked and shaped by hand

It is surely one of the most unusual building projects in the whole of Europe. Guédelon castle near the French village of Treigny is being constructed exclusively using methods and materials that date back to the early 13th century. As a result, every stone for the building is hewn from the nearby quarry, and then formed into the right shape by hand by stonemasons. Every single nail and every tool is forged on site using traditional means. Even the pigments in the paint workshop for decorating the walls are extracted directly from earth and ground stone. It is an often exhausting and especially time-consuming job for the roughly 40 craftsmen working here. They have been working on this project since 1997, and there is no end in sight.

Building in the Middle Ages – a back-breaking job

The unusual construction site has become a magnet for visitors. DW reporter Hendrik Welling also wanted to take a closer look. For the series "Europe to the Maxx" on the culture and lifestyle magazine "Euromaxx", he travelled to Treigny in the heart of France. There he not only had the unusual project shown to him, but also lent a hand – from cutting stones to transporting them to covering the roof of the chapel. Follow his exhausting mission in our video.

Glimpses of a time long past 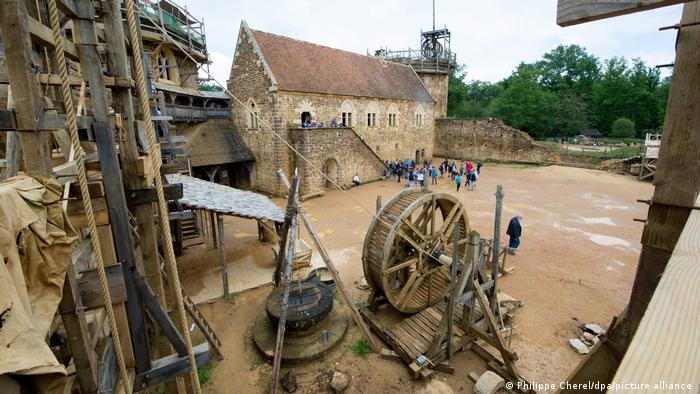 Around 300,000 people visit the eternal construction site of Guédelon every year

The construction of Guédelon is an enormous undertaking – but it is worth it as the project also pursues a scientific goal. Historians and archaeologists were as involved from the beginning as the architects who designed the structure. Through the construction, many long-forgotten techniques have been rediscovered. The numerous tourists who visit the building site can literally immerse themselves in the world of the Middle Ages here. The admission fees they pay chiefly finances the ambitious plans of the initiators. And if you want to make a physical contribution, you can sign on at Guédelon as a voluntary helper for a couple of days – and thus play your own small part in the largest medieval castle building project in Europe.

Getting there: Guédelon is around 10 kilometers of the town of Treigny on the D955. The nearest railway station is Cosne-sur-Loire, from which it is a half-hour drive to the building site.

Special tip: If you want to volunteer on the building site, you must apply in advance, and should be able to speak French.

The highest steeple in the world is not in Cologne or Rome, but in Ulm. The church in southern Germany is a building of superlatives. That's why it's featured in part eight of our series "Extreme Places".