An English author living in Berlin wants to improve foreigners' perception of Germans and their language. In his book, he shows English readers how to be more German and which German expressions they should adopt.

How to be German

Adam Fletcher describes himself in a typically self-deprecating way: a 30-year-old, bald Englishman living in Berlin who writes nice things about Germans "because no one else does it," as he told DW in a recent interview. Fletcher wants to improve the reputation of Germans and get rid of old, worn-out stereotypes that are not being updated as quickly as he'd like them to be. 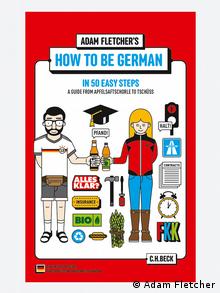 The book was published in German and English, each language beginning at either side of the book

Eating sausages, drinking beer, wearing leather shorts - that's not what being German is all about, according to Fletcher, who has been living in Germany with his German girlfriend for the past four years.

His first book, "How to be German in 50 Easy Steps," is "a slightly satirical love letter to Germany and the German way of living," Fletcher said. The book is based on his original blog, which quickly amassed more than 2 million clicks.

If you want to hear some of Fletcher's insights into what makes Germans German - from their love for sparkling apple juice to collecting insurance contracts and tilting their windows - then listen above to his interview with DW.

You can also take a quiz to find out how German you are.

Fletcher recently published a second book, this time dedicated to the German language.

"The German language has a fairly bad reputation, starting all the way back with Mark Twain who suggested that it's a dead language which, ironically enough, is too inefficient and shouldn't be learnt by anyone because it has too many rules and too much grammar," he said.

Although Fletcher is still struggling with mastering the German language, he doesn't agree with Twain's assessment. "German is an awesome language. But unfortunately it's too heavily influenced by English these days, and Germans are taking too many words from the English language."

That's why Fletcher and his friend Paul Hawkins decided to do the opposite. They set out to improve the English language by making use of the German language. So they took their favorite German compound words, idioms and expressions that don't exist in English and translated them into "Denglisch." That's how Fletcher's second book, "Denglisch for Better Knowers" came into being. In the picture gallery, you can find DW's favorite 10 examples from the book.

Feel inspired? Then test how good your "Denglisch" is.

Are punctuality, precision and beer mugs as inherent to German society as the world thinks? In his playful exhibition, 'Typically German?,' artist Rolf Sachs takes apart the clichés. (24.03.2014)

A group of young people in Berlin with multicultural backgrounds are challenging stereotypes. They're proving that being German doesn't have anything to do with what you look like - or even where you're from. (01.01.2014)

Who's the 'typical' German?

In other countries, there's often a quite clear conception when it comes to what the average German is all about. A new study offers glimpses into how Germans live day to day. (01.10.2013)

Learn a funny or quirky German word each week