Are punctuality, precision and beer mugs as inherent to German society as the world thinks? In his playful exhibition, 'Typically German?,' artist Rolf Sachs takes apart the clichés. 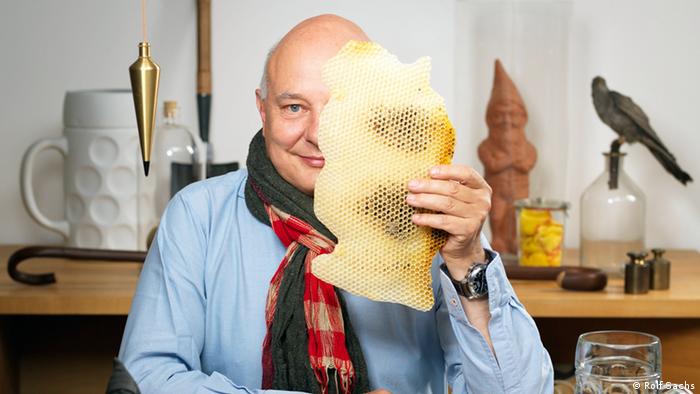 A rainbow of waste bins - blue, red, yellow, purple - stands in perfect alignment outside the Museum of Applied Art in Cologne. Each bin bears a sign: intolerance, stubbornness, bureaucracy, jealousy. Let's toss away those ugly cliché traits, Rolf Sachs suggests in his homage to Germany's famously stringent waste separation practices. It's this witty spin on everyday items that have made Sachs' '"Typically German?"' the museum's most successful exhibition in recent history, museum communications director, Romana Breuer, told DW. The topic "stirs something inside people," Breuer said of the 24 artifacts and sculptures. "It's like holding up a mirror." The exhibition has been extended through June 9, 2014. DW dialed up the artist and designer in his London workshop. 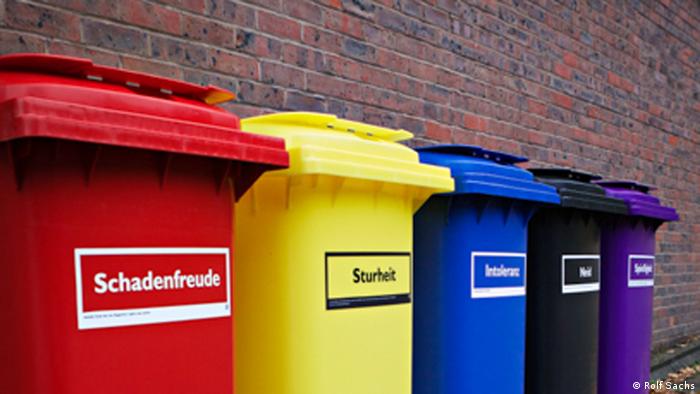 Taking out the trash can be quite a job in Germany

DW: You have both German and French heritage. Why did you decide to focus on German characteristics for the exhibition, "Typically German?"

Rolf Sachs: My creative language is much more German than French, meaning it's much more conceptual than decorative. My mother died when I was two, and I was brought up by my grandmother in Germany and Switzerland. It is really in these formative years that you feel what a culture really means, what the soul of a culture is. I think these years were very important to be able to make such a show. I wouldn't be able to make such a show for France.

The piece "Die/das Mass" is a giant beer mug made of fine porcelain and "Bodenständigkeit" is a tree branch cast in bronze. You worked with traditional porcelain manufacturers and bronze foundries to produce these pieces. What role does traditional craftsmanship play in your work?

It's beautiful to produce work with traditional craftsmanship. These places have a heritage of hundreds of years, and they have skills which are perhaps not as popular anymore because classic porcelain paintings and so on are not much our taste anymore, but the craftsmanship and the know-how, which is there with people who are doing this in the third, fourth, fifth generation, is absolutely spectacular. 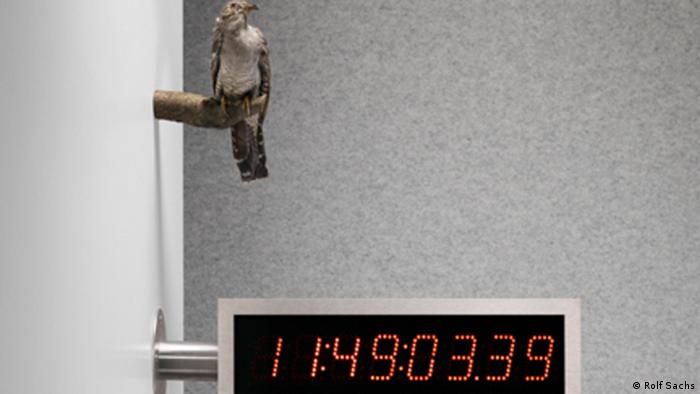 When the milliseconds are ticking, is it ever really possible to be truly punctual?

You consider yourself an artist as well as a designer. How do you blend these two professions?

Some of your favorite pieces in the exhibition are "Der unendliche Geist" (The endless spirit), a bronze tower of books, and "Sehnsucht" (Yearning), a scale with a brain and a heart. What makes these pieces special to you?

The purpose [of the book tower] is to show what the German soul is and how the German character and traits have evolved over the centuries. It starts with the first literature book from Germany and goes up through scientific books and philosophers and ends with Günter Grass. It should show that it goes on forever. And of course the written word is a strong fundament of German culture. Few nations have that many philosophers. We all have fantastic writers, but I think especially German philosophy was key philosophy in the world. As for the other piece, "Sehnsucht" (Yearning), we always have this ambiguity between emotion and rationality, the heart and the brain. It's something each child has to decide - which will be stronger for him. Especially in German culture, it is the land of poets of thinkers, so this ambiguity is inherent in this famous saying. 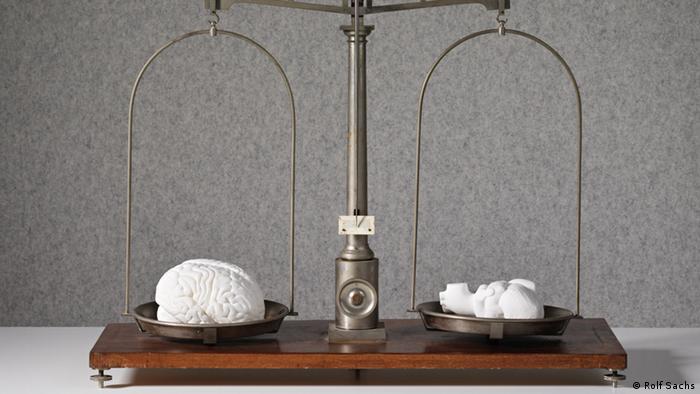 One of Sachs' favorite pieces, "Sehnsucht," illustrates the inner struggle some Germans face between emotion and rationality

One piece in the exhibition, "Memento Mori," is isolated from the others. It features a German army helmet that was pierced by a bullet but found after 60 years in the ground. How did you decide how to handle Germany's dark chapters, such as World War II?

I made all these pieces, which are all character traits. Then I thought, when one discusses the subject, obviously we have this dark side of history - which is nearly unbelievable today that it existed, but it did. So I created Memento Mori which is more of a political piece. It is important to have to keep [the exhibition] in balance.

What do you want people to take away from the exhibition?

First, they will think about these German virtues. Germany functions quite well. Each country has its great disadvantages and advantages. The English have a fantastic way of life. They are not so worrisome, so "vorsichtig" (careful). They are much more courageous, even in their investment philosophy and how they approach life, which make their life probably easier, and they don't have the angst which the Germans have in them because they're careful, because they're planning. The Italians have a fantastic lightness (…) and live much more for the day, which is also less planned than in Germany. And the country functions in a similar way.

You find your own identity. You think about certain things which you think are totally normal, but in fact they're not all totally normal, they are things that are inherent in you because of the culture you come from. 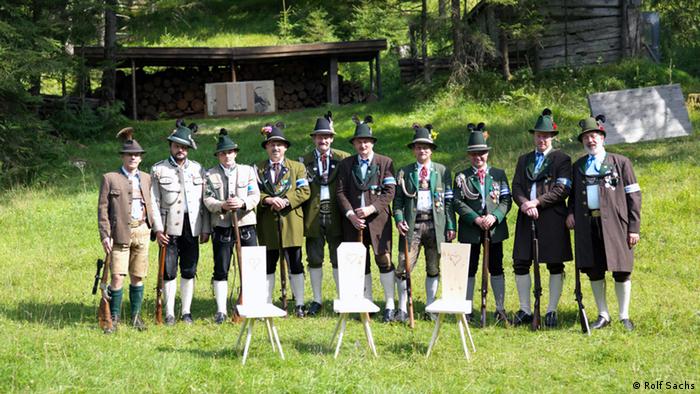 So, are you "typisch deutsch?"

Rolf Sachs' mother is French, his father is German, his wife is Iranian, and he lives in England. On April 10, he'll be speaking at the Museum of Applied Art in Cologne as part of the Cologne Design Lounge series.

Typically German? The power of clichés

Germans drink beer, Cretans lie and the French eat frogs: Old clichés still have an impact on the way we view each other. But what's behind them? DW speaks with a stereotype expert. (21.05.2013)

Blue skies and grazing sheep? It's not Germany's rural countryside, but its most densely populated, former industrial powerhouse. Once known only for coal mines, the Ruhr Valley digs deep to fight regional stereotypes. (12.09.2013)

Is Germany's image improving in the UK?

In the UK, Germany has long been derided as a nation of humorless sausage eaters. But British authors, businesses, cultural institutions and sports fans seem to be having a change of heart. (09.05.2013)