Britain to announce interim cap on non-EU migrants | Europe| News and current affairs from around the continent | DW | 27.06.2010

Britain moves to impose a five percent reduction in new non-European Union immigrants to avoid a last-minute surge ahead of a permanent reduction set to come into force next spring. 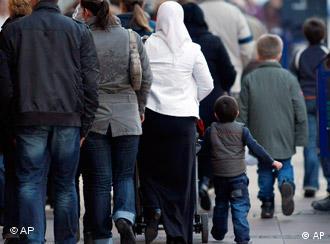 Britain is putting a cap on immigrants from outside the EU

Britain announced plans on Saturday to impose a temporary limit on the number of non-European Union migrants it allows into the country, to avoid an influx of foreign workers ahead of a permanent cap next year.

Government sources said that just 24,100 workers from outside Europe would be allowed into the country before next April, when the permanent cap is expected. That number is a five-percent drop on last year.

"It's an interim measure to avoid a last-minute rush," said one government source.

Home Secretary Theresa May is expected to announce the move on Monday, as she launches a consultation process for deciding the level of the permanent cap. Earlier this week, Immigration Minister Damian Green said the government planned to reduce immigration levels back to 1990 levels.

Prime Minister David Cameron made immigration one of his key talking points in the run-up to last month's election, promising to bring annual net migration down from "hundreds of thousands to tens of thousands." Currently, Britain sees about 170,000 immigrants a year.

Cameron's tough stance on immigration was popular with voters, but drew criticism from business groups who claim that the cap could harm recovery by making it harder for firms to hire workers.