Immigrant integration in Germany a success story, report says | Germany| News and in-depth reporting from Berlin and beyond | DW | 20.05.2010

A new report by Germany's Advisory Council for Integration and Migration says immigrants are fitting into German society better than first thought. The council found a high level of trust between Germans and immigrants. 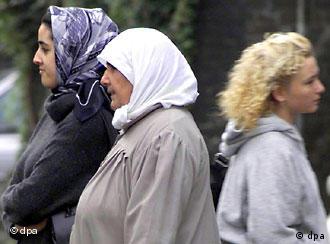 With a handful of European member states considering bans on the Muslim full-face veil, policies aimed at encouraging integration have been pushed to the center of public debate. The stereotype of the so-called failed immigrant who can't find employment, lacks education and stands out in a crowd is fueling much of this debate.

But the first annual report by the German Advisory Council for Integration and Migration fundamentally disagrees with this stereotype. Klaus Bade, chairperson of the council, said efforts in Germany to break down barriers between ethnicities are bearing fruit.

"In this sense, integration in Germany, and also internationally, in many areas has become more successful," he said.

The council canvassed more than 5,000 people, including immigrants and Germans, for its integration barometer. Both groups were asked how they perceived the other group, with nearly two-thirds of immigrants responding that they either "more or less" or "completely" trusted Germans. Astonishingly, only 54 percent of Germans reported trusting other fellow citizens.

Two out of three immigrants also said they felt Germans were interested in their social integration. Bade said both sides also agreed on the integration problem areas that needed to be addressed.

"On both sides more than 95 percent mentioned unemployment, improving prospects for education, language courses and combating discrimination," he said. 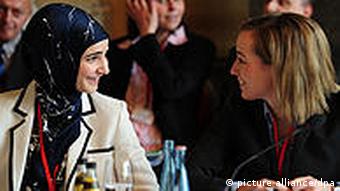 Ines Michalowski from the Social Science Research Center in Berlin said the annual report shows that integration in Germany is coming along much better than widely perceived.

"This report and the research that is behind this report actually shows that there is more optimism and that people are pretty much used to immigrant neighbors and immigrants are used to having people without immigrant backgrounds as their neighbors," she said. "People are actually used to living together."

The survey also showed that most people who were questioned approved of, rather than disapproved of, the integration policies of the German government. Michalowski said this is because integration is not a central political issue in the country.

"In general, the interesting thing about Germany is that if you compare it to other countries like France or the Netherlands, among the political parties there is really a big consensus about what this issue should look like and what the main problems are," she said. "And there is no main right-wing populist party in Germany right now to stir up this anti-immigrant feeling."

However, the statistics presented in the advisory council's report also show that much still needs to be done. While 30 percent of German children finish their high school diploma, only 10 percent of children from immigrant families earn this qualification.

Though there has been progress over the last 20 years, the council said the number of children of immigrant background finishing their high school diploma has risen, and the number of those who drop out of high school has fallen.