Britain Ratifies EU′s Treaty of Lisbon | Europe | News and current affairs from around the continent | DW | 17.07.2008

Britain has formally ratified the European Union's Treaty of Lisbon, the country's Foreign Ministry said in London. The beleaguered treaty's future is still in doubt after Irish voters rejected it last month. 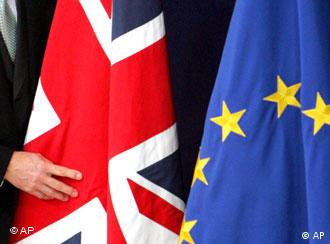 Euroskeptic Britain has OK'd the treaty

Both houses of the British parliament as well as the head of state Queen Elizabeth II gave the nod to the reform treaty.

All steps for the final ratification were taken and the documents were deposited in Rome, where the 1957 Treaty of Rome for the founding the European Economic Community was signed.

Britain was considered a "swing candidate" as far as ratification went. After Ireland rejected the reform treaty in a referendum on June 12, there were calls among euroskeptics in Britain as well for a referendum on the issue.

The Lisbon Treaty, which is designed to streamline decision-making in the expanding bloc, was thrown into limbo after Irish voters rejected it in a referendum on June 12.

Leaders of the 27-nation bloc are grappling with how to salvage the treaty after the Irish "No" vote, since it has to be ratified by all member states to come into force.

Britain's parliament passed the treaty on June 18, and it was given Royal Assent the next day, despite fierce opposition by the main opposition Conservative Party and other euroskeptic critics.

The ratification comes as French President Nicolas Sarkozy, prepares for a visit to Ireland next week, where he will like meet opposition to a proposal he made for Ireland to hold another vote on the Lisbon Treaty, media reports have said.

Irish Foreign Affairs Minister Micheal Martin said Sarkozy would be in a "listening mode" during his brief trip on Monday, and would not be imposing any solutions.

"We're not entertaining any prospect or any bullying from anybody. We'll be looking at it from an Irish perspective and what's in the best interests of Ireland," Martin said in a radio interview Wednesday.

French and Dutch voters torpedoed the EU constitution by voting against it in popular votes in 2005. The Lisbon Treaty replaced it, but critics say it is basically the same document with a different name.

Germany's lower house of parliament, the Bundestag, passed the Treaty of Lisbon on reforming the European Union by considerably more than the required two-thirds majority on Thursday, April 24. (24.04.2008)