Germany′s Bundestag Ratifies the Treaty of Lisbon | Germany| News and in-depth reporting from Berlin and beyond | DW | 24.04.2008

Germany's lower house of parliament, the Bundestag, passed the Treaty of Lisbon on reforming the European Union by considerably more than the required two-thirds majority on Thursday, April 24. 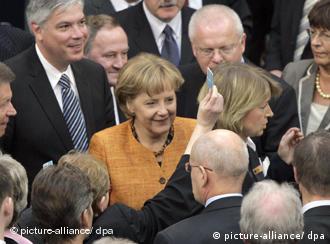 Only the Left Party opposed the treaty, which was passed by 515 votes for to 58 against, with one abstention.

Left Party leader Lothar Bisky called the treaty a document created in "the spirit of neoliberalism" and urged the EU to scrap the current document in favor of one which was "more transparent, simple and understandable for the people of Europe."

Bisky also called for "Glasnost for Europe" and reiterated his desire for a referendum on the treaty, a stance taken by a total of 28 left-wing parties across Europe. He clarified that Germany's Left Party was not against Europe but against the Lisbon Treaty and "the serious disadvantages" it held for the people of the EU. 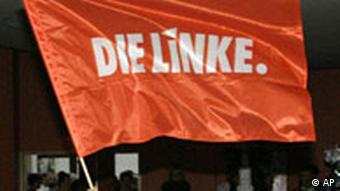 The Left Party flew the flag of opposition over the treaty

After Thursday's agreement in the Bundestag, Germany's upper house, the Bundesrat, will vote on May 23. Passage by the required two-thirds majority is seen as certain there too.

Merkel hails a win for Germany

Speaking ahead of the vote, Chancellor Angela Merkel described the treaty, signed in the Portuguese capital on Dec. 13, as "good for Europe" and a "win for Germany."

Merkel was largely responsible for getting the heads of EU governments to agree on the text's draft while Germany held the rotating EU presidency last year.

The treaty would provide a solid basis for Europe to move forward, Merkel said.

Through the Lisbon Treaty, which combines and clarifies earlier agreements to streamline EU decision-making, Europe would grow stronger and more self-confident than before, Merkel said.

She also highlighted the introduction of more majority votes as a positive factor.

Kurt Beck, the leader of the Social Democrats, said the Lisbon Treaty was a good basis for Europe but should not be held up as the definitive plan for the future of the EU. He also said the ultimate goal remained an inclusive constitution and a Charter of Fundamental Rights signed by all EU nations. 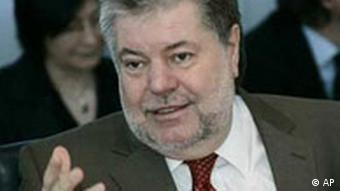 Beck, echoing the opinion of a number of large trade unions in Germany, also called for the creation of a common social policy, saying social rights should be at the heart of European politics.

The leader of the Confederation of German Trade Unions, Michael Sommer, said Thursday before the vote that the Lisbon Treaty should include a social progress clause, He added that "the treaty is not an end in itself, it should go on to help the working and living conditions of the people."

The 27 EU member states are being asked to ratify the treaty by the end of the year, ahead of elections to the European Parliament in 2009. Ireland is to hold a referendum on the treaty in June -- the only country to do so.

No votes in referendums in France and the Netherlands in mid-2005 ended attempts to ratify a more ambitious European Constitution, leading to the drawing up of the Treaty of Lisbon.

Merkel in Dublin Urges Irish to Say 'Yes' to EU

German Chancellor Angela Merkel urged Irish voters Monday to allow the European Union to "continue to flourish" by voting in favor of the EU reform treaty in a referendum in June. (14.04.2008)

A last-minute compromise deal led to the easy passage of the EU's reform treaty. The government and opposition had been locked in weeks of feuding over the Lisbon Treaty, which replaces the failed EU constitution. (01.04.2008)

The European Parliament on Wednesday voted overwhelmingly in favor of the Lisbon Treaty, which reforms the European Union's institutions. There were, however, some protests from Euroskeptics demanding referenda. (20.02.2008)

Should the Treaty of Lisbon be subject to a referendum by the people of Europe, as suggest by the Left Party's Lothar Bisky? Please include your full name and country with any reply.

Click here for an interactive map of Europe containing information about the status of the Lisbon Treaty ratification in various EU countries.

Portugal ratifies the Treaty of Lisbon